We found Instead of case counts, the distribution of Ct values gives a NEW way to estimate epidemic trajectory! 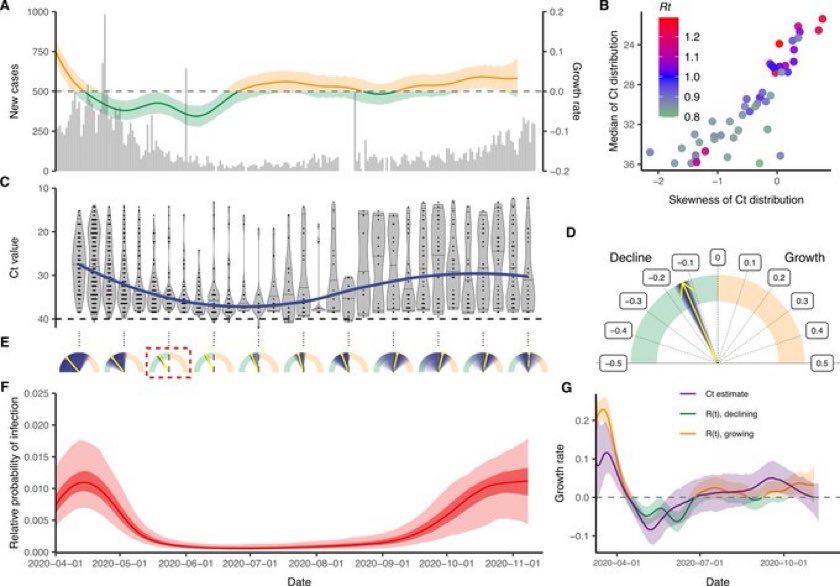 Essentially, we created a barometer that gives the growth rate (or decay rate) of an epidemic based entirely on whether the distribution of viral loads in ppl at a single time in a population is averaging high (epidemic growing) or low (epidemic declining).

2/x
This property of epidemics (when they are going up, detected virus loads are higher on average) has caused massive confusion.

The virus itself isn’t changing nor are the actual virus loads inside of individual people...

3/x
Instead, when an outbreak is increasing exponentially, the majority of positive samples collected coming from people who have very recently been infected - and thus have high virus loads bc peak titers are usually within 48hrs of turning PCR positive...

4/x
On other hand, when an outbreak is subsiding, the vast majority of people detected via surveillance w PCR are no longer infectious, and thus have, on average, very low viral RNA loads.

7/x
Here he details the new research.... but if not yet acquainted with how it all works, see next tweet for a link to an original thread he wrote describing the basics underpinning this all. It’s very cool mix of within-host kinetics and Epidemiology (my favorite to mix!)

Here is an earlier tweet thread that @jameshay218 wrote on the topic that goes through and details the basic mechanisms underlying this very cool phenomenon that we can take advantage of for public health!

You can follow @michaelmina_lab.
Tip: mention @twtextapp on a Twitter thread with the keyword “unroll” to get a link to it.