Read on Twitter
1) Many people believe that global warming/environmental destruction is humanities #1 challenge.
2) The scientific evidence is clear. It is a big problem with severe consequences for humanity. 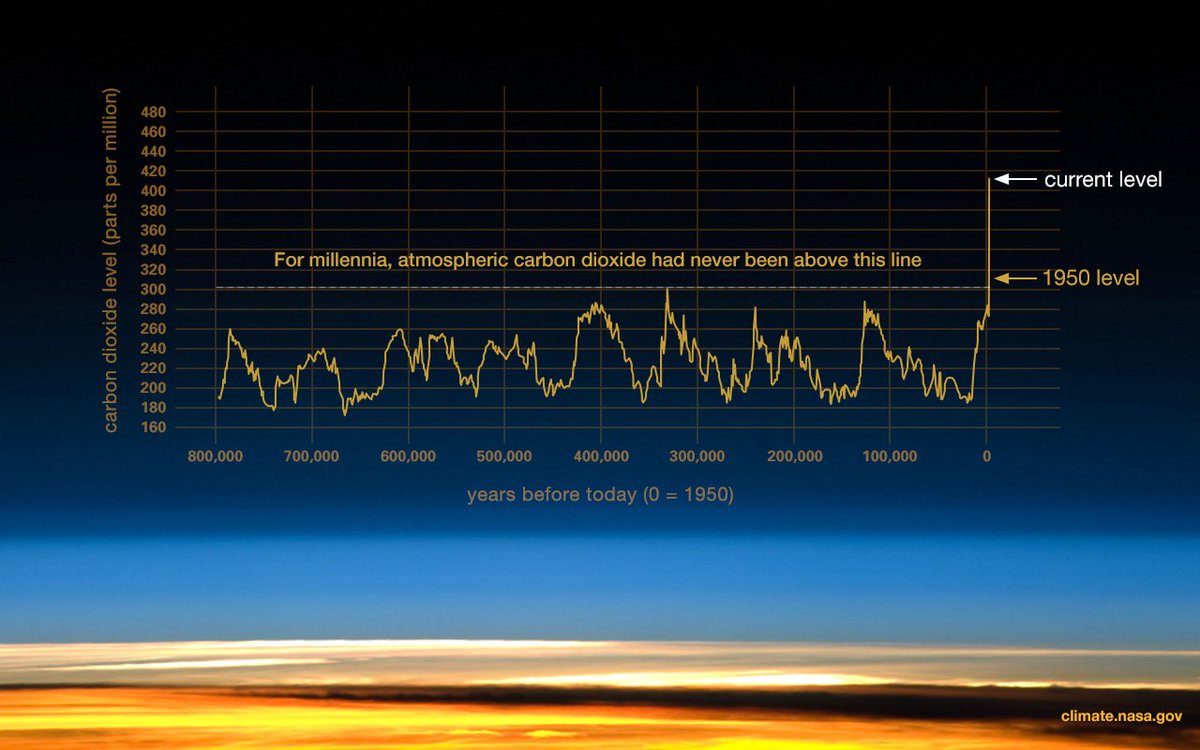 3) So - it gets a lot of well deserved attention. From policy makers, investors, entrepreneurs - all working to solve the problem before it's too late. Solar, wind, battery and other innovations to enable a more productive, greener world.
4) Entrepreneurs, like @elonmusk have created incredible new businesses in @Tesla by recognizing how to construct a business to win this trend. First, by selling the technology to high paying early adopters (for prestige), and then using that market to lower the cost for others
5) That success (in businesses like Tesla) is driving a rush of new capital and entrepreneurial talent - hoping to capitalize on the shift in markets, which is advancing the technology further. All because there is now becoming an "economic" incentive for green.
6) Many wonder if we're moving fast enough to avoid a climate crisis - unaware that people make short term choices while dismissing the long term implications of those choices. In other words, unless there is a value (perceived or real) in short the term, people won't change.
7) I'm hopeful that we are getting close to a point where the economic incentive for green is self-reinforcing. Ie- people change because the value they are receiving from a new businesses competing for their attention is far greater than what they now receive.
8) But - I can't help but think - Everyone is missing a far more important piece of the puzzle with respect to climate. One that is - an order of magnitude bigger problem...... The system itself.
9) Our entire "inflationary monetary system", which is itself failing because it is "competing" against a stronger force -
Exponentially advancing technology that is driving efficiency and deflation with it.
10) That inflationary monetary system is based on credit which "requires" inflation at all costs. For without that inflation, credit is destroyed and the entire inflationary monetary system" collapses. To avoid that collapse, we continue down a road - only making it worse.
11) and - because people measure outcomes from within the inflationary monetary system - they look for solutions within the system - they are unaware that it is the "system itself" causing most of the damage.
12) Even "if" they realize that growth today is merely a mirage - (caused by money manipulation in the form of never ending money printing) They demand more printing and stimulus, no matter what party or leader is in charge.
13) They fail to recognize all the knock on effects of the "manipulation of money" on the environment and elsewhere. Ever higher prices (inflation) require more production, more consumption, more transportation, more energy, more government spending, More, of everything, Forever!
14) An escalating loop of needing more, and all the damage that it causes. All because money itself is being manipulated - and with it - free markets, in order to keep the inflationary monetary system "intact". Hamsters (all of us) on a wheel - not questioning the wheel itself.
15) A system of sound money fixes it this. Yes - it won't be pretty for the existing inflationary system but that doesn't change the facts.....
16) The existing monetary system will collapse because it is based on a lie - (albeit a believable one) That somehow, we all needed our money (or real wages) to be worth less each year (inflation) to thrive.
17) When human progress + advancing technology must be deflationary in a free market.
In other words, exponentially advancing technology requires a currency that allows for deflation.
18) Every other choice - is a choice away from free markets, and a choice towards - more control and manipulation.
19) This is just one reason I believe Bitcoin might just be humanities greatest invention. It is still very early, but over time, I believe it will force a new system that is congruent with where human innovation leads - towards abundance!
I know it's still hard to imagine......
20) but please take time to learn. It might be the most important decision of your life. Follow: @PrestonPysh @johnkvallis @CaitlinLong_ @MartyBent @RaoulGMI @APompliano @LynAldenContact @PeterMcCormack @danheld @princey1976 @Breedlove22
You can follow @JeffBooth.
Tip: mention @twtextapp on a Twitter thread with the keyword “unroll” to get a link to it.