Read on Twitter
Seeing a lot of confusion about this. The reason Tesla didn't log any autonomous miles in CA is that both Autopilot and the "Full Self-Driving" beta are SAE Level 2 driver assistance systems and not autonomous driving systems. No need to log any data below Level 3. https://twitter.com/Keubiko/status/1359538343051223049

There is no test or testing body for the SAE automation levels. They exist within the "self-certification" paradigm, meaning an OEM simply states what the level of capability their system has and regulators take them at their word. That's it. No performance test, nothing.
When Tesla first released the FSD beta, they briefed NHTSA on it. In that briefing they presumably told NHTSA that it is currently an SAE Level 2 driver assistance feature, and NHTSA really had no choice but to accept that and monitor the situation for "unreasonable safety risks"

In California, a Level 3 or above (aka actually autonomous) system must log miles and disengagements under the permit regime. That would be tough if FSD was L3 or above, as customers would have to do the compliance logging. That mess one reason to keep FSD categorized as L2.
In 2019, I asked the CA DMV about their permit regime's reliance on OEM designations and the possibility that an OEM could try to exploit it. Here's what a spox told me, which I included in this broader piece on the question of regulatory barriers to FSD http://thedrive.com/tech/29338/what-are-the-regulatory-barriers-to-full-self-driving 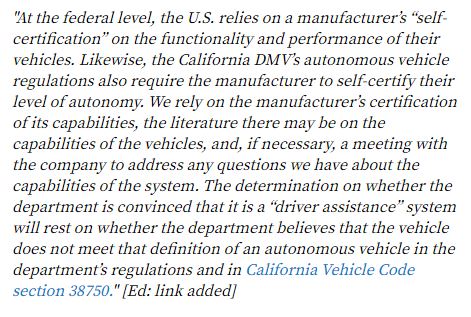 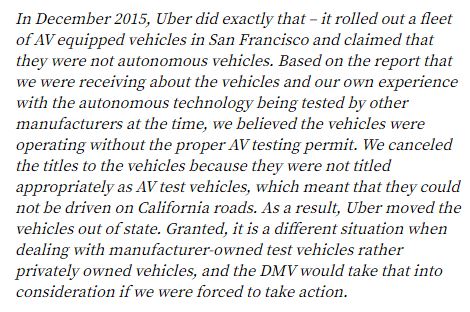 Tesla only formally logs autonomous miles in CA for a single purpose: to make misleading videos.

Starting with the 2016 "Paint It Black" launch video: https://dailykanban.com/2017/02/03/ca-dmv-report-sheds-new-light-misleading-tesla-autonomous-drive-video/

If you are interested in this story, definitely check out @PlainSite's trove of Tesla-DMV correspondence here: https://twitter.com/PlainSite/status/1267584909289287680

Basically, CA's DMV made permit rules based on basic, common-sense assumptions that the entire legitimate AV sector agrees on (mainly: AVs will be operated as corporate fleets). Tesla's program diverges so far from those assumptions that the regime almost can't be applied to it.
It seems like DMV's assumption is that they don't need new rules because Tesla won't achieve real autonomy, which is reasonable. But non-AVs operated by consumers who think they are AVs introduces entirely new kinds of risk/danger that no regulator has seriously considered.
Here's my main takeaway: any company who consciously takes an approach that can't be regulated under existing rules, and actively works to avoid any rules that might be applicable to it, you almost certainly shouldn't trust your life to that company's autonomous vehicle.
You can follow @Tweetermeyer.
Tip: mention @twtextapp on a Twitter thread with the keyword “unroll” to get a link to it.