Read on Twitter
A reminder why it’s cool for GOP voters that @SenateGOP lost control after the GA runoffs.

The fraud nature of the vote by @MittRomney @BillCassidy @BenSasse etc is evident that none of them call for the House GOP to bring up impeachment of former Dem presidents Obama/Clinton. Those 6 GOP Senators were not even on the forefront to uncover 2016 Obama DOJ abuses.
Senator Leahy is the presiding “judge” of the impeachment but he is also a vote/juror in it.

I don’t see principled @BenSasse @MittRomney raising alarms about it

How can Leahy pledge to be and be “fair to all sides” when he is a vote on one of those sides?

Odd that @SenateDems at the time did not move forward with an impeachment after he left office.

The Senators who are alleged victims are jurors in the trial of the alleged perp.

The presiding “judge,” Senator Leahy is also a juror and an alleged victim.

Amazing that the constitutional crowd backs it.
The 7 Republicans who voted to convict Trump were most in favor of “let Mueller finish his job” - a job which perpetuated a conspiracy theory that suggested the 2016 election was not legit, yet those clowns think Trump was wrong to doubt 2020? FRAUDS!

It gets better:
The @SenatorBurr led the Senate’s Russia investigstion which - again - was rooted in the notion that the 2016 election was not legit, yet he votes to convict Trump for doubting the 2020 results. Rich. Those 7 are hardly on the forefront to condemn elected Dems who repeatedly
encouraged and legitimized political/policy violence and unrest.

Summary: The wing of the GOP most vocal in undermining the integrity of the 2016 elections and most silent when Dems encourage violence, voted to impeach Trump for “inciting violence” by doubting the 2020 outcome.
In 2018, Dem insurrectionists tried to stop democracy (the confirmation of new a Justice) by taking siege of a Senate building; blocking the entry/exit of door and elevators for Senators. Few if any of the GOP Seven seemed outraged by it or even blamed elected Dems for it.
This is another illustration that the principles driving the Non/Never-Trump wing of the GOP are breaking norms (by impeaching a POTUS twice); permitting violence if done by Dems; getting media attention and folding for Dems. This is being selfish and stupid.
I am reminded by a reader what a degenerate fraud @MittRomney is: 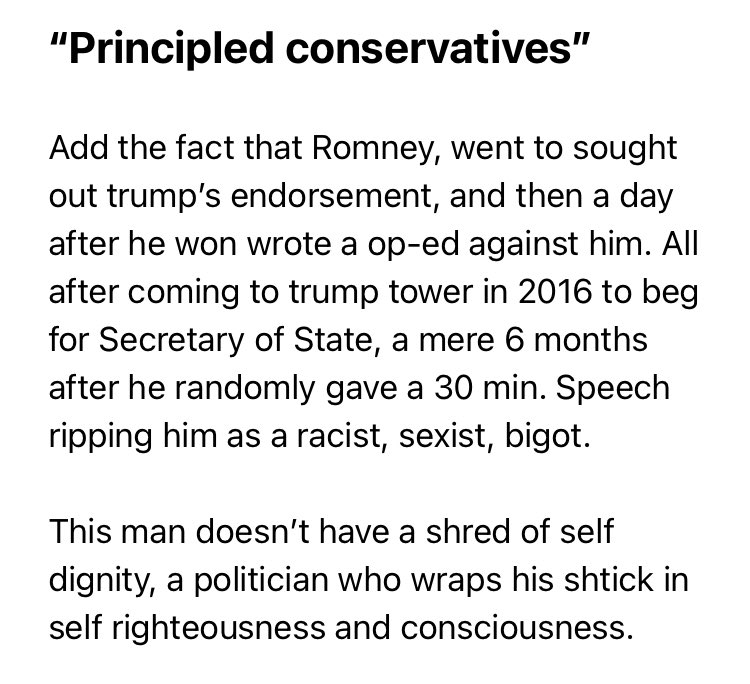 Had Trump’s efforts to ascertain the integrity of the elections and his 1/6 rally prep been inciteful, Cap Hill Police would have not welcomed people into the building, and DC Mayor and the MD Governor would have had a full PD/Nat Guard mobilization DAYS in advance. Didn’t happen
because what Trump did was fairly normal political shtick in the eyes of the MD Governor, DC Mayor and Cap Hill Police. It is only after the fact that people reverse engineered his words (including doctoring videos of his speeches) to say that he spent weeks inciting the masses.
“Prosecutors” (House Managers) doctored evidence against the defendant, yet “principled Republicans” like @lisamurkowski @SenToomey still voted to impeach.

When prosecutors need to make up evidence, it’s a give away that they have no case and should lead to acquittal.
You can follow @YossiGestetner.
Tip: mention @twtextapp on a Twitter thread with the keyword “unroll” to get a link to it.