Read on Twitter
Payment For Order Flow (PFOF) has been under the spotlight recently, I thought it would be interesting to look into how it came to be..

First a quick visual primer, no point in me reinventing the wheel, @bloomberg did a great job already: 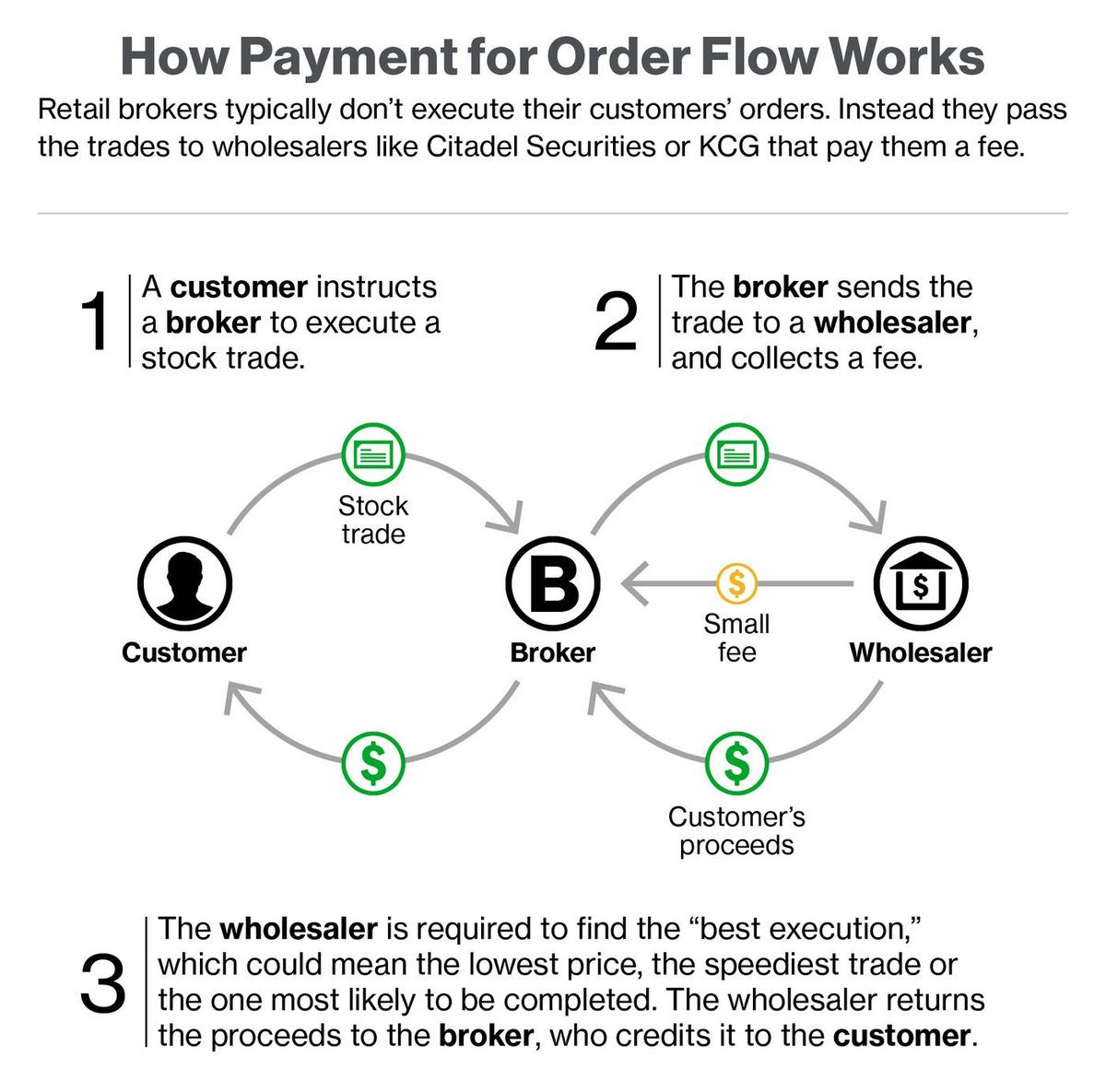 As explained in a great SEC Memo on the topic of "issues affecting retail customers" in 2016, PFOF got started in the 1980s when near real time bids and transaction data became available (mainly driven by technology)

https://www.sec.gov/spotlight/equity-market-structure/issues-affecting-customers-emsac-012616.pdf
All of a sudden, OTC market makers were competing with exchanges to execute those trades. In order to encourage the brokers to send them order flow, they went knocking at their door offering them compensations of $0.01 to $0.02 per share
This number grew in the 1990s but with decimalization, per-share rates for PFOF dropped, sitting around $0.0010 to $0.0031 per share in 2014
These few pennies add up, to the point where Citadel Securities and a few others paid @robinhood nearly $100 million in Q1 2020. TD Ameritrade pulled in $492 million in PFOF revenues in 2019. A lot of pennies!
Random meme interlude because I heard yesterday from @elonmusk that memes are worth 1000 words!
Those order-routing decisions are subject to what is called "the duty of best execution" which means making sure that the order is executed "at the most favorable terms reasonably available under the circumstances for a customer’s transaction" and this is where it gets blurry
Because most retail brokers sell "free transactions" by not passing over the costs of exchange access and the likes, they could have a vested interest in sending their orders to the bidders willing to pay higher for order flow.
The beauty of this model, if you can say so, lies in the fact that yes customers don't pay per se for their transactions, but they never hear about the commissions that the broker accumulates over time either...
To summarise, critics claim that it creates misaligned incentives. Trading platforms can choose to optimise for their own gain rather than providing the best service for the retail customer.
As the SEC says: It is possible that, in the absence of payment for order flow, market makers could have incentives to quote more competitively, in which case customers could receive even better prices for their orders
Fun fact: Madoff (the famous one) was one of the pioneers of this "legal kickback" and claimed to be the largest dealer of NYSE-listed stocks in the US
I'll share some more thoughts on this model, how other countries are regulating it and why some companies such as @public are taking proactive measures on the topic

I'm going to try to be writing more of these tech news related threads so if you're interested, give me a follow!
You can follow @antoine_moyroud.
Tip: mention @twtextapp on a Twitter thread with the keyword “unroll” to get a link to it.