Read on Twitter
This picture, contrasting the Punjabi and Bihari farmer, tells you why the Jat Sikh farmers of Punjab are protesting. In Bihar, 72% of the farm produce is sold in the private sector. Less than 8% rely upon government procurement agencies. 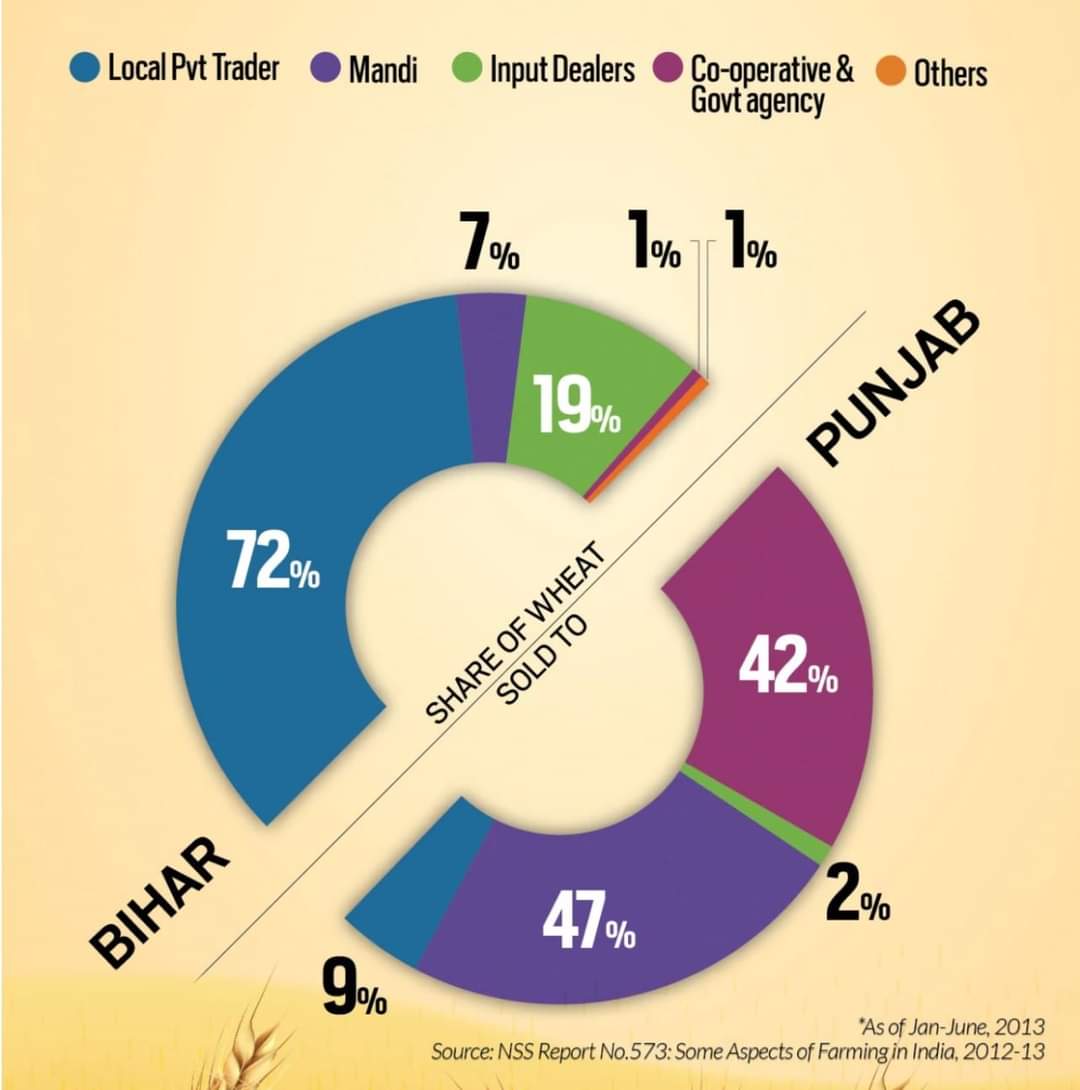 This has bestowed the Bihari farmer a greater adaptive fitness. He produces what the market needs.

In contrast, just 9% of Punjab's farm produce is sold in the private sector. Over 90% of the Punjabi farm produce relies upon government mandis and cooperatives.
As a result, the Punjabi farmer has failed to acquire adaptive fitness. He is stuck in a bygone era and produces crops which the market doesn't want. The Punjabi farmer knows that he is just no match to the Bihari farmer when it comes to adaptive fitness,
productivity, and embracing the marketplace. So, he is trying to cling on to the status quo by blockading highways.

Here is another interesting data point. A Punjabi farmer earns 30% more than a Bihari farmer for the crops. In other words,
the inefficient and failing candidate is rewarded more than the achiever! This is, plain and simple, dole. It is actually worse. There is a direct nexus among the rich Sikh farmers, middlemen, procurement agencies, and distilleries.
So, in many cases, all transactions happen only on paper with no crop being traded. This is also closely linked to the hawala racket where these rich farmers transfer the loot to Canada, UK, or USA.
It is time for the Sikh farmers to embrace reality, a modicum of honesty, and patriotism. After all, the hardworking and more productive poor farmers from elsewhere in India have been subsidizing the Sikh farmers,
who are eleventh in agricultural productivity despite having 99% irrigation. Sikh farmers are just no match to the Bihari, MP, or Tamil farmer when it comes to productivity or market adaptation.
They have been gaming the system by getting overpaid for the substandard crops they produce which have no market demand.

It is time somebody told the Punjabi farmers the truth, i.e., you have been receiving handouts from the rest of India all these years.
This has to end. Express gratitude for the generosity the rest of Indians have showered upon you all these decades. Time to earn an honest livelihood.

Source : @KalavaiVenkat FB.
You can follow @Indumakalktchi.
Tip: mention @twtextapp on a Twitter thread with the keyword “unroll” to get a link to it.