The Aditya Hridayam comes to us from the Yuddha Kanda of the Ramayana.

An invocation to Surya in the middle of war? You must be kidding me!

The Aditya Hridayam, as it is chanted today, comes to us from Valmiki.

Valmiki sets the stage before beginning the prayer.
The Aditya Hridayam opens, as the Latin classicists would say "in media res", that is into the middle of things.

There is a battle raging on! 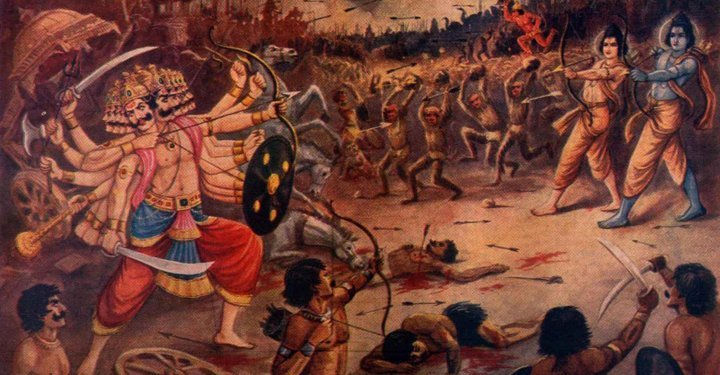 In the battle against King Ravana of Lanka, the Vanavasi accompanied by the Vanara army stands deep in thought.

His thoughts are darkened by the fatigue that has enveloped him.

Why is he buried in thought?
Ravana has come fully equipped, accompanied by his powerful army.

The battle has raged on for days together. His generals are defeated, his sons are dead, but the King is unfazed.

After all, his are the arms that shook Kailasa.
Pic: From Halebidu 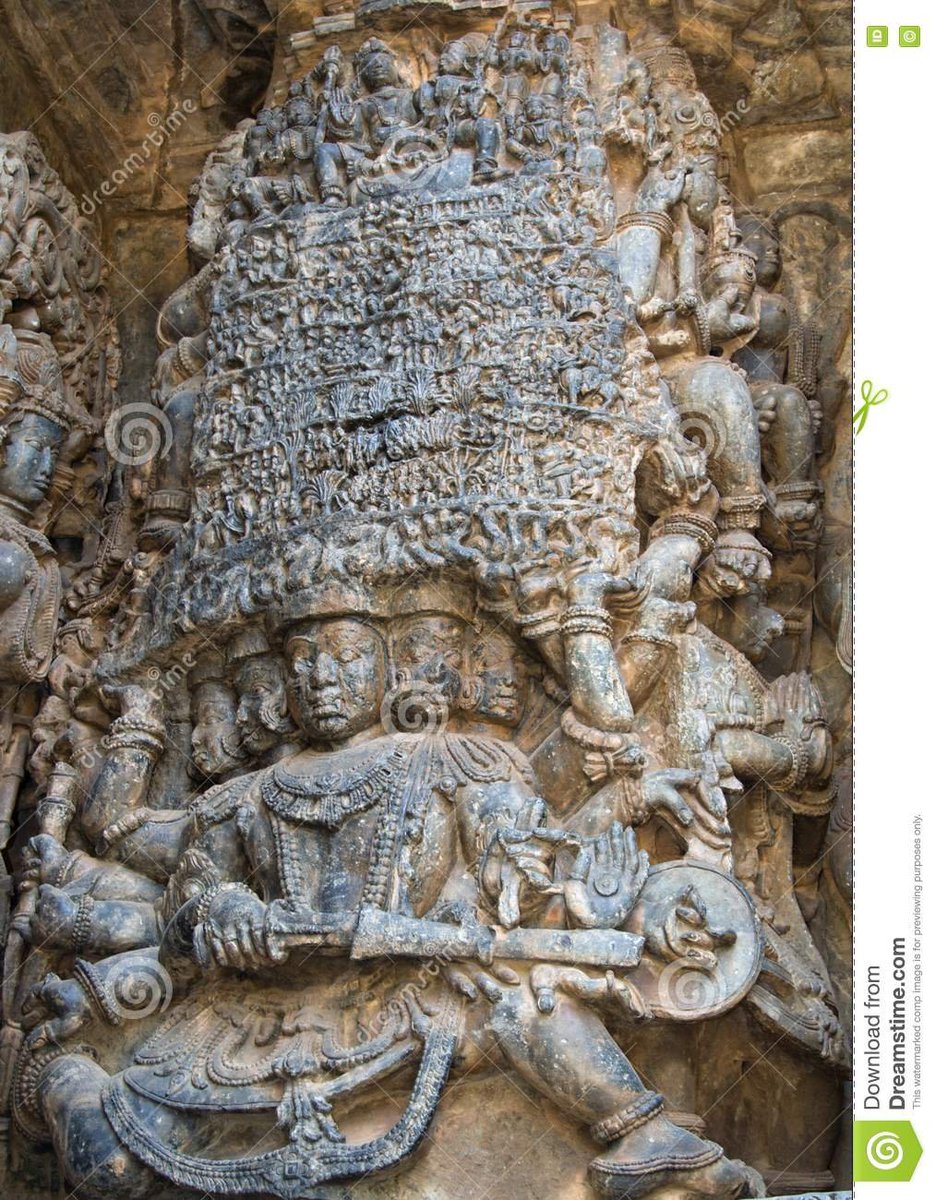 Ravana stands challenging the Vanavasi from Ayodhya.
The Gods have gathered to watch this battle.

It is then that the great sage Agastya appears on the scene! 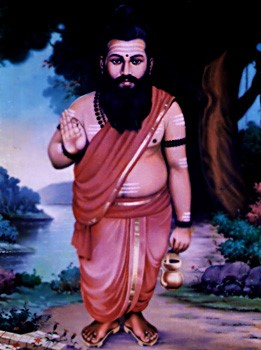 Apart from being one of the greatest sages, I think Agastya is the most prolific in appearances.

Mentions of him are found in the Vedas, both Ramayana and Mahabharata, and as one of the Tamil Siddhars.

But we digress.
Agastya approaches Rama. His opening statement itself is a morale booster!

"Rama! Rama of the Great Arms!", he says.
Having slightly shaken Rama out of his dark thoughts, he addresses him with affection as Vatsa.

Rama is at once rapt!
"A secret! Could it help me win?"
Agastya agrees, "Yes! With this eternal secret, you can win all enemies in battle!"

"What is it?"
So, Agastya goes on to talk about the Aditya Hridayam and the benefits that accrue to those who chant it always.

A holy hymn that destroys all enemies, brings victory, eternal prosperity and all auspiciousness.
Agastya continues to extol the virtues of Aditya Hridayam,

He says it is the blessing of blessings, that which destroys all sin, drives away anxiety and sadness and bestows one with a long life.
"Well! Why is the Aditya Hridayam so special?"

"Because, it is dedicated to Surya!"

So, Agastya begins to praise Surya as part of the Aditya Hridayam.
He says Surya is crowned with rays, the one that rises, the one who is greeted by both Devas and Asuras.

"This Surya you should worship for he brings light to the world!" says Agastya
In this sloka, Agastya calls Surya as Vivasvaan, the brilliant one.

Krishna tells Arjuna in the Bhagvad Gita, that he taught the knowledge of this Yoga to Vivasvaan first, and then Vivasvaan taught this to Manu, who then taught it to Ikshvaku.
A skeptical Arjuna asks Krishna, Vivasvaan, the Sun is before your time. How could you have taught him?

It is then that Krishna tells Arjuna that he will share his Avatara Rahasya and his many births.
But coming back, Agastya calls Surya as Vivasvaan, the brilliant one.

It is because Manu was the son of this Vivasvaan, that he is called Vaivasvata Manu.
Agastya continues to extol Surya.
Surya is the embodiment of all Gods, he is full of Tejas, and rays of light.
He protects the populations of Devas and Asuras and their worlds, with his bright rays! 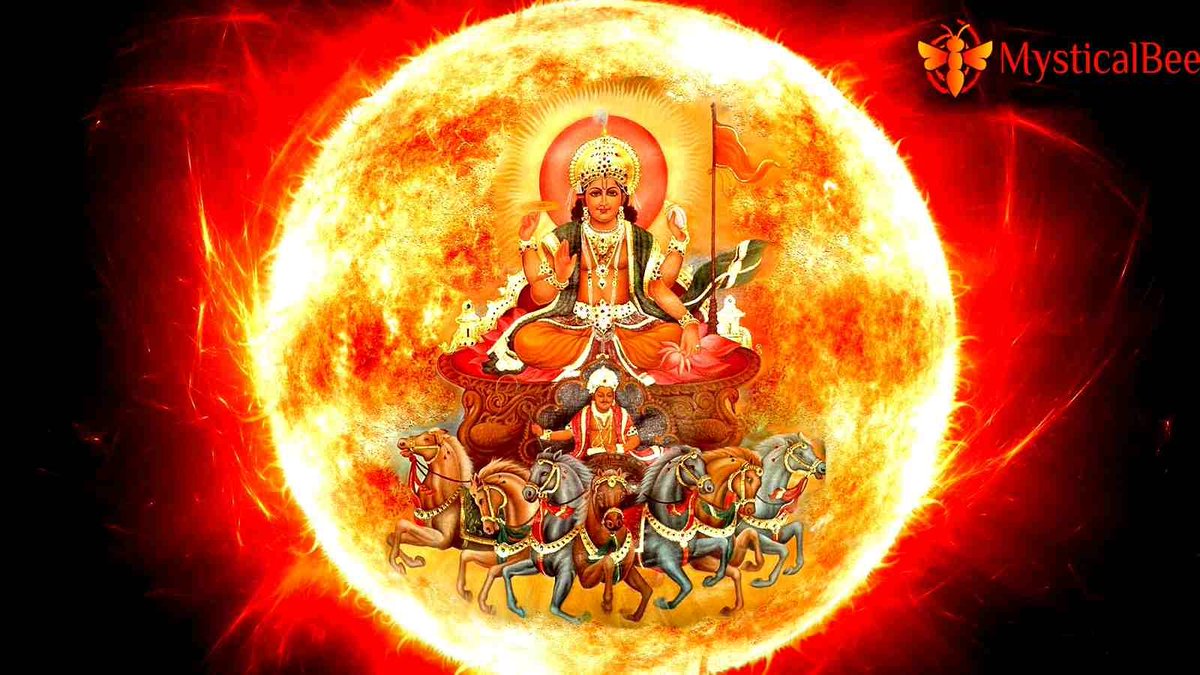 From saying Surya is the embodiment of all Gods, now Agastya sets about listing the Gods that Surya embodies.

He is Brahma, he is Vishnu, he is Shiva, Skanda and Prajapati.
He is also Mahendra, Kubera (Valmiki uses the adjective Dhanadah), Kaala Yama, Soma and Varuna (Again an adjective for Varuna is used, Apaampati - the Lord of water)

This set of deities put together is interesting.

Why?
To answer that, we need to look at the Dikpalas - the Guardians of the directions.

Indra is the Dikpala of East, Kubera of North, Yama as is commonly known is of the South and Varuna of the West! 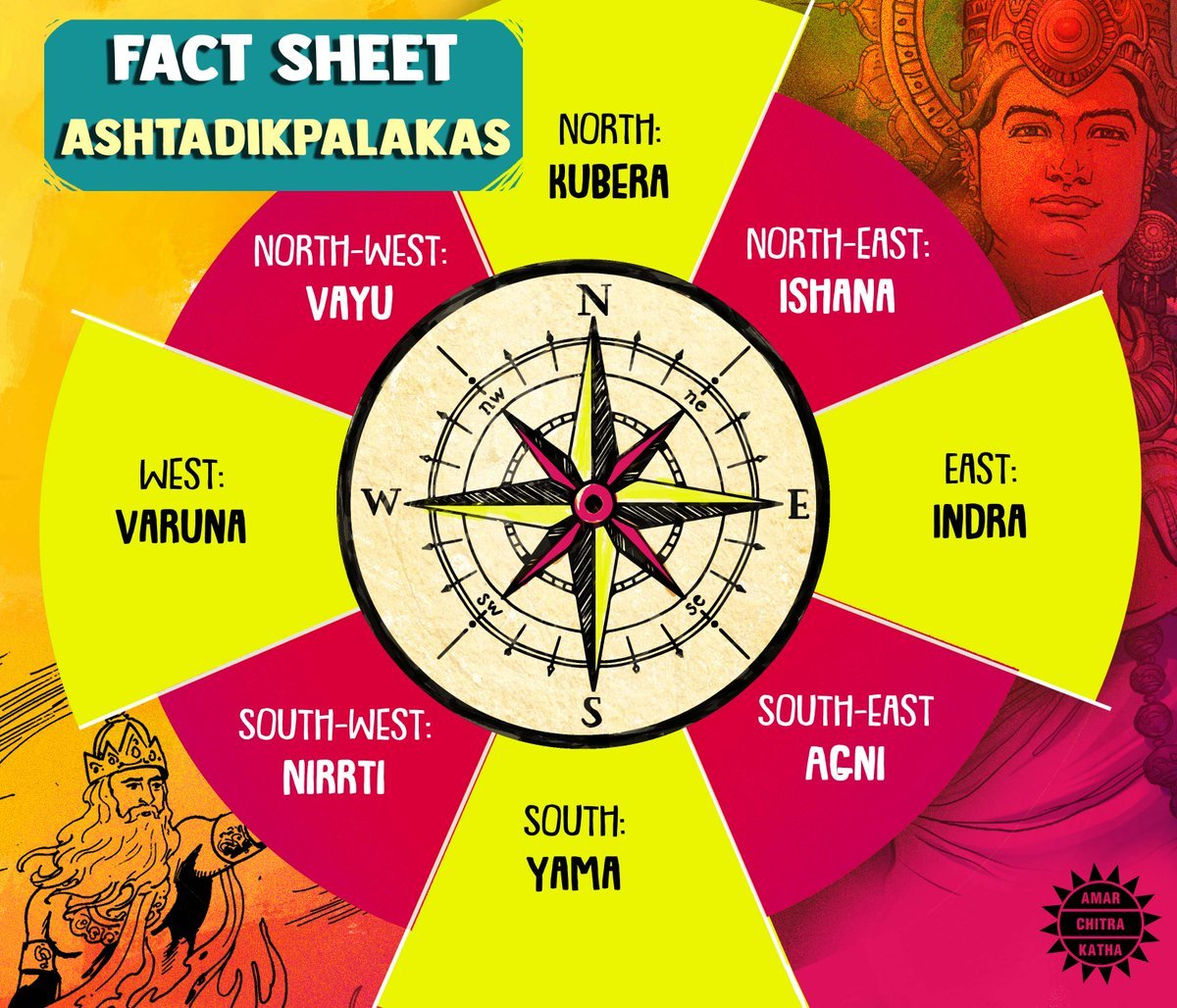 So by extolling Surya as the embodiment of the Dikpalas of the cardinal directions, Agastya is telling us Surya is the guardian of the directions too!
In the same verse, Agastya also includes Soma - the moon, whose light is a reflection of Surya's. 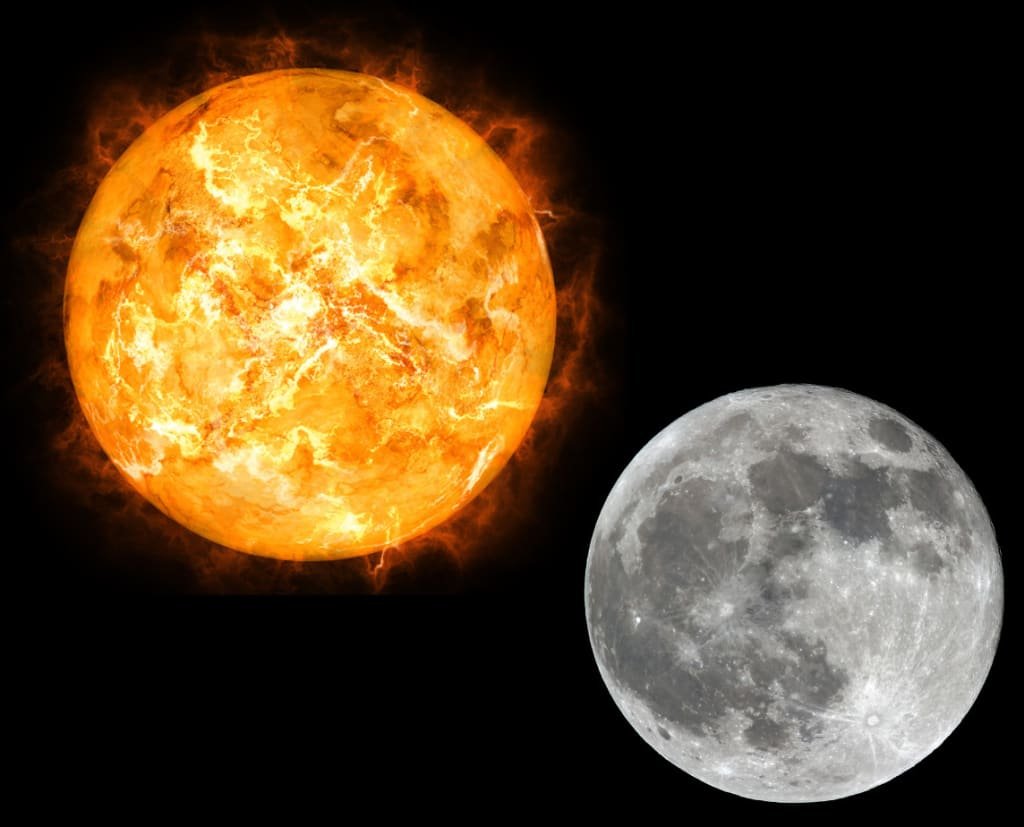 Surya also embodies the Pitrus, the eight Vasus, the 12 Adityas, the 2 Ashvins, the Maruts, Manu himself.

He is also Vayu, Agni, the Prajah (entirety of life), the life force (Prana), the creator of the seasons and the creator of light itself!
The first set of deities in the previous tweet,
8 Vasus (Born as sons of Shantanu&Ganga, of whom the 8th is Bhishma)
12 Adityas (of whom he is Vishnu says Krishna in the Gita)
2 Ashvins (the twin physicians)

These along with the 11 Rudras comprise the 33 major deities.
Agastya continues to call Surya as Aditya, as he is the son of Aditi.

He is also Savitr - the one who brings life. It is to this aspect that the Gayatri mantra is dedicated. 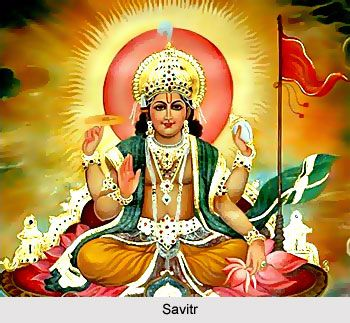 He courses across the sky and is the possessor of rains.
He is the nourisher of the world.

He appears golden, and has the golden life force.
He is also Divakara, the creator of the day!
Surya, the one of the 7 horses, the one of a thousand rays, the one who destroys darkness, the one who creates life (the word Tvashtr is used).

He is also Maarthanda, bringing life, and radiant! 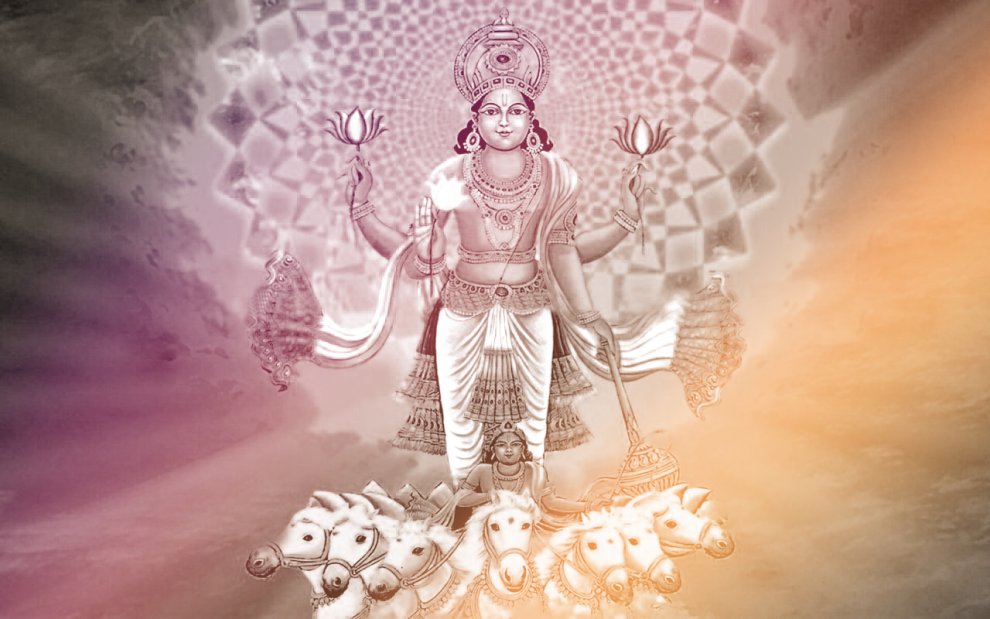 Continuing with the theme of Surya being the source of life, Agastya addresses him as the golden egg, Hiranyagarbha.

He also controls the opposing attributes of cold and warmth, he brings forth and is praised!
He is Agni-Garbha as well.
Agastya once again calls him as the son of Aditi.

Surya is the destroyer of the cold - Shishira nashana, Agastya says.
Surya is Vyomanatha, the Lord of the sky. He destroys darkness, he's also the Master of the 3 Vedas, Rig, Yajur and Sama.

He sends down heavy rain. He is the friend of water, and courses across the Vindhya Veethi.
Surya radiates heat in all directions, he is surrounded by rays, he is Death, he is reddish brown in color, he provides warmth to all!

He is of great splendour and the life of all that exists. 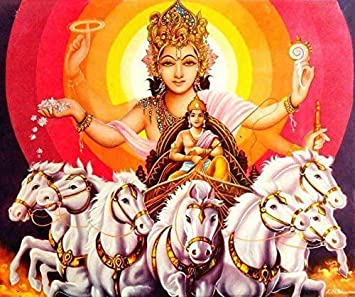 I think I'll stop here for today and continue tomorrow, when Surya has risen!

Thank you for reading thus far! See you tomorrow.
You can follow @jeysundhar_d.
Tip: mention @twtextapp on a Twitter thread with the keyword “unroll” to get a link to it.