Read on Twitter
Alright, the apes have it! Let's discuss the mythical "alt season" which people seem to get obsessed about every time BTC moves by itself.

Alright, that started a little inflammatory, so let me clarify. When I hear people talk about "alt season," it tends to mean like, a period when alts rally a ton, especially vs. BTC, and it doesn't really matter what a coin is -- they all just go up.
The reasons I think this is not guaranteed start with BTC, so let's take a look at what's happened with BTC lately. And that is quite a lot! In the past week or so, BTC has continued its mega-rally that started around Thanksgiving with all the news of U.S. institutional buy-in. 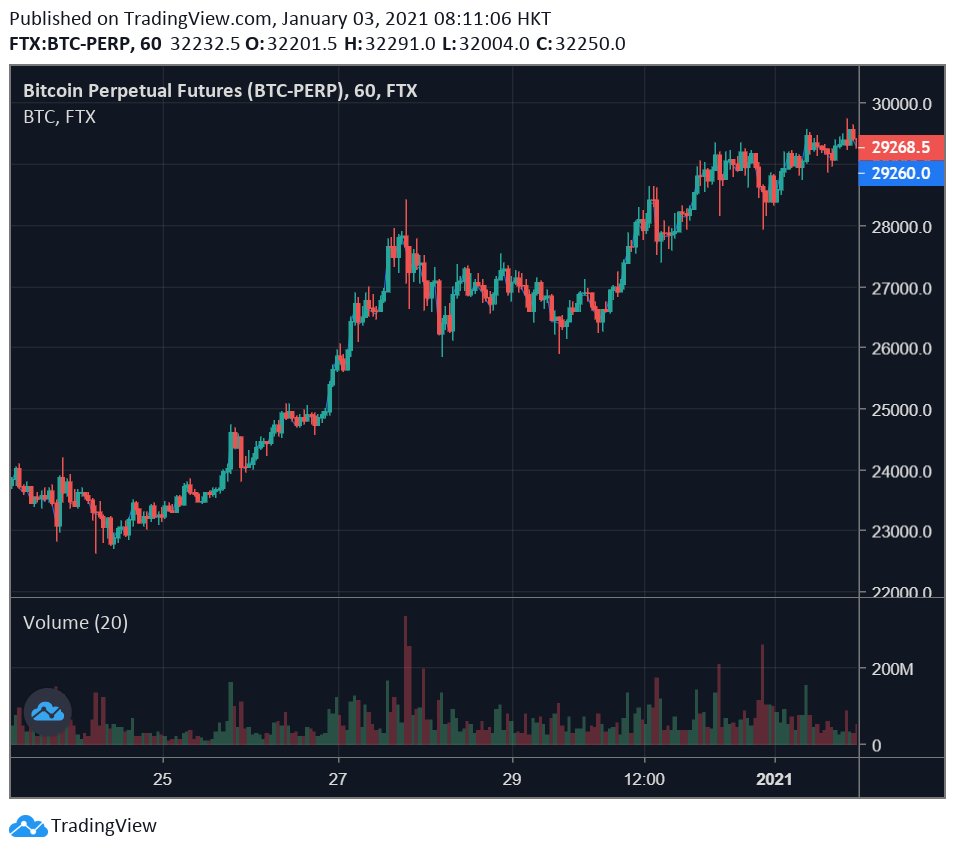 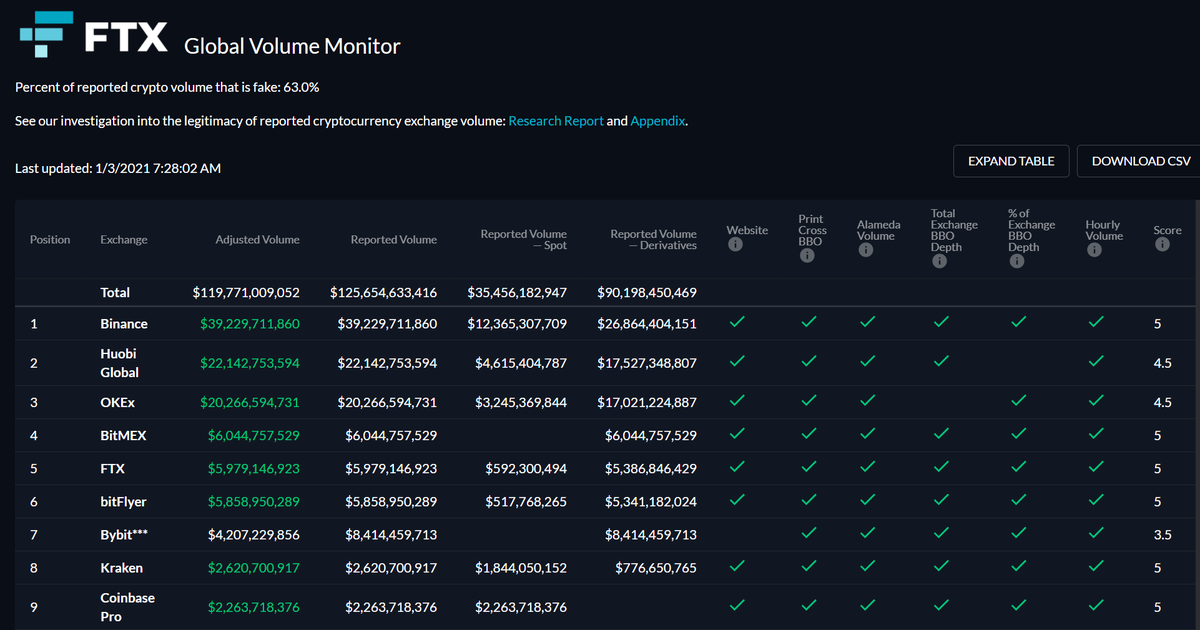 (Speaking of Coinbase -- I've seen a lot of chatter about people withdrawing BTC from exchanges like it, indicating HODLing. And ... maybe, but mayne not. Maybe they're gonna sell soon, or even collateralize more buys with it! We don't know yet.)
But that organic buying has been into "holiday liquidity" -- with some of the market gone, there are fewer offers to trade against. And that means liquidations have a way higher impact! Which has driven a lot of it. New ATHs also tend to have lower liquidity, too (no old orders).
So, those two effects -- one organic, one inorganic -- drove BTC up to close to 30k. Which brings us to today! What allowed BTC to get through 30k so fast when it took like 40 tries for it to break 20k? 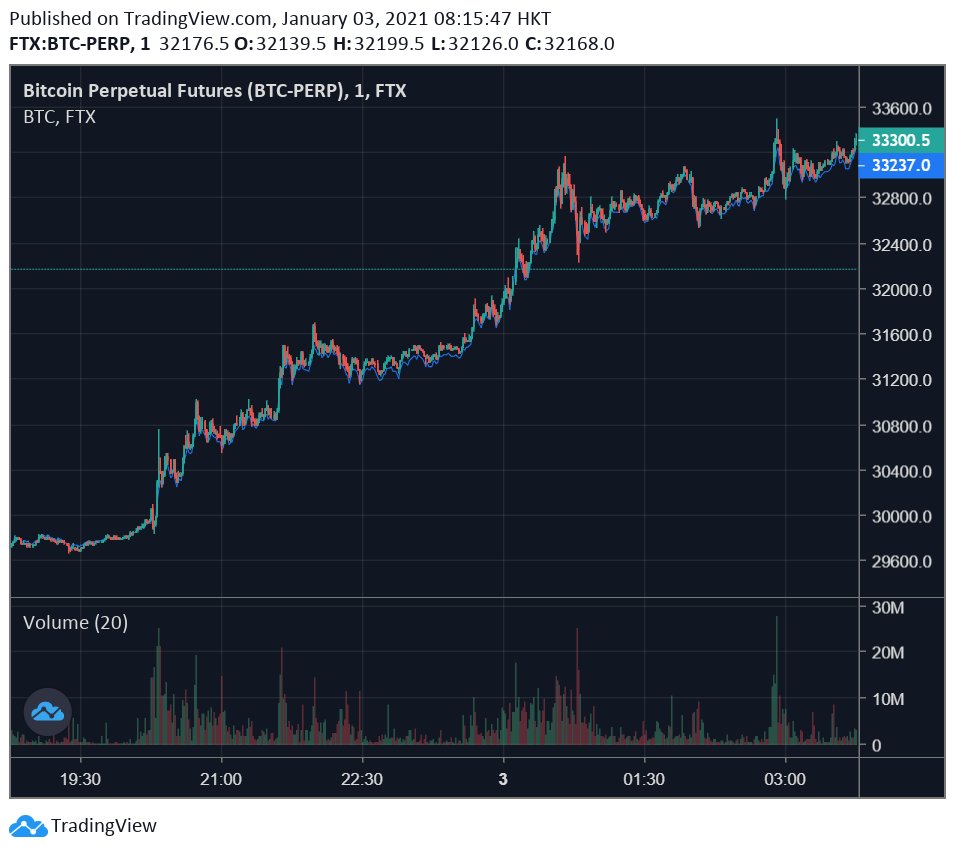 My take: there was no "narrative" around breaking 30k. For 20k, it was the previous ATH which BTC failed to break and then crashed HARD. Lots of people wanted it above 20k ... but many others really thought it was a great sale. Which we saw, like, 40 times!
But 30k? Yeah, some sellers, for sure -- but nothing near as "organized" and nothing with as much history as the one-time ATH. So, the liquidations were enough to blow right on through! And, you guessed it, more liquidations kept driving the prices up and up.
(No need to go into that, I guess -- a TON of positions on all the derivatives platforms got liquidated during this rally into holiday/ATH low liquidity, which drove it up a good deal more than the organic buyers did -- but the spot buyers did matter! As we'll see.)
Alright, next ... BTC immediately crashed 10% WTF? This one was kiiinda because of derivatives and liquidations again -- a TON of OI was aggressively opened during this period, perp funding was paying 50bp/day to shorts are various points! And a small drawdown triggered more. 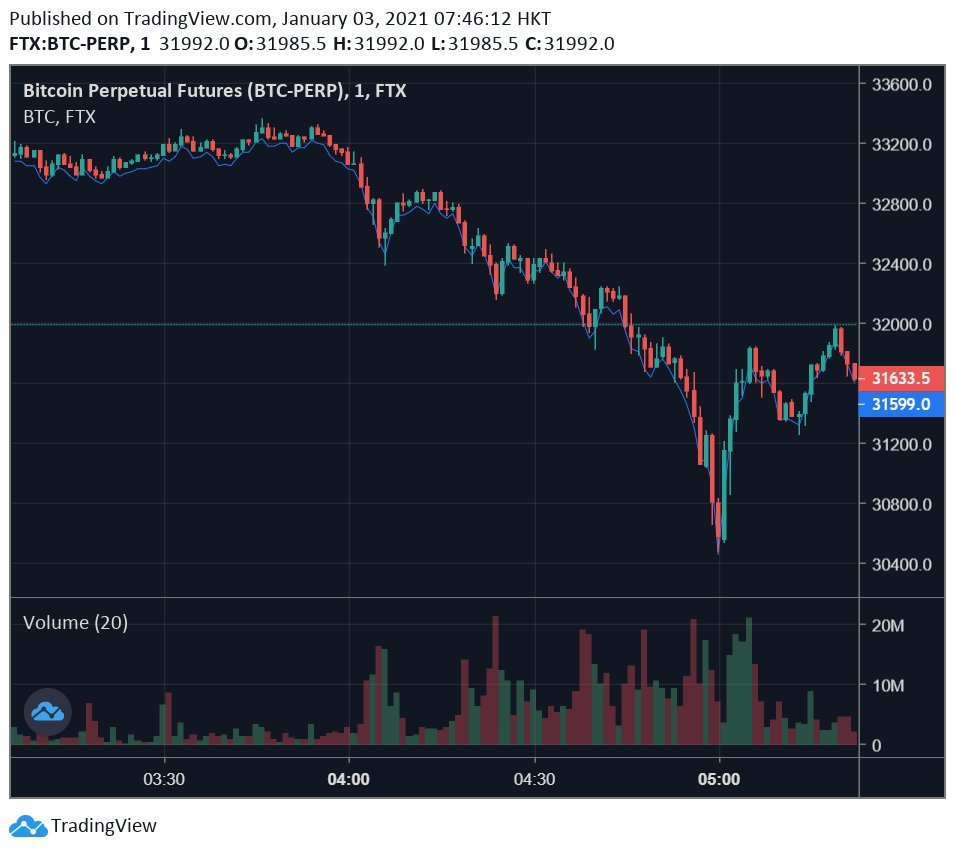 But the drawdown was actually mostly on spot exchanges, as it turns out. And during the BIG rally? Some liquidations, yes, but check out this chart of the BitMEX BTC perp premium (to spot) and OI during the period when BTC fell 10%: 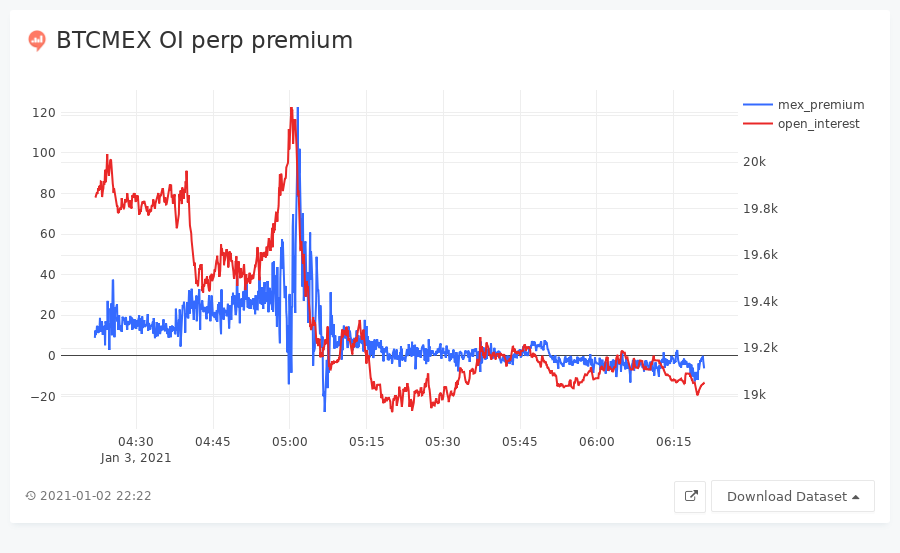 Again, some liquidations; but a lot of the OI change was just a real seller, because the premium to spot got HIGH! Spot was the bigger factor here, and a lot of selling was taking place on those markets, with less leverage. Which made selling this perp ... appealing to Alameda ;)
But it signals that, yet again, the spot markets actually *were* important here. This time for some reversion -- it demonstrates that the "organic" buyers thought it was too high! Just as you might expect for a market move dominated by organic AND inorganic buying.
So! does that mean the U.S. customers have "called the top"? Well, some, but there are many players here. It does seem to signify a continued importance for the U.S. institutions, though -- and it'll be important to watch to see how that plays out.
OK, cool, altcoins! In my view, because this market narrative is so strongly about the U.S. institutions and what they're buying ... if any altcoins are gonna go up *if that narrative keeps up*, it should be the ones which the U.S. is "alright" with. Which are those?
ETH seems a good candidate -- it's got CME futures coming up, it's in a few other U.S. funds, and it's seen as sort of similar to BTC in important ways. And it's done OK (lol, compared to BTC) during the past week or so, as well as today, reaching its own (local) high. 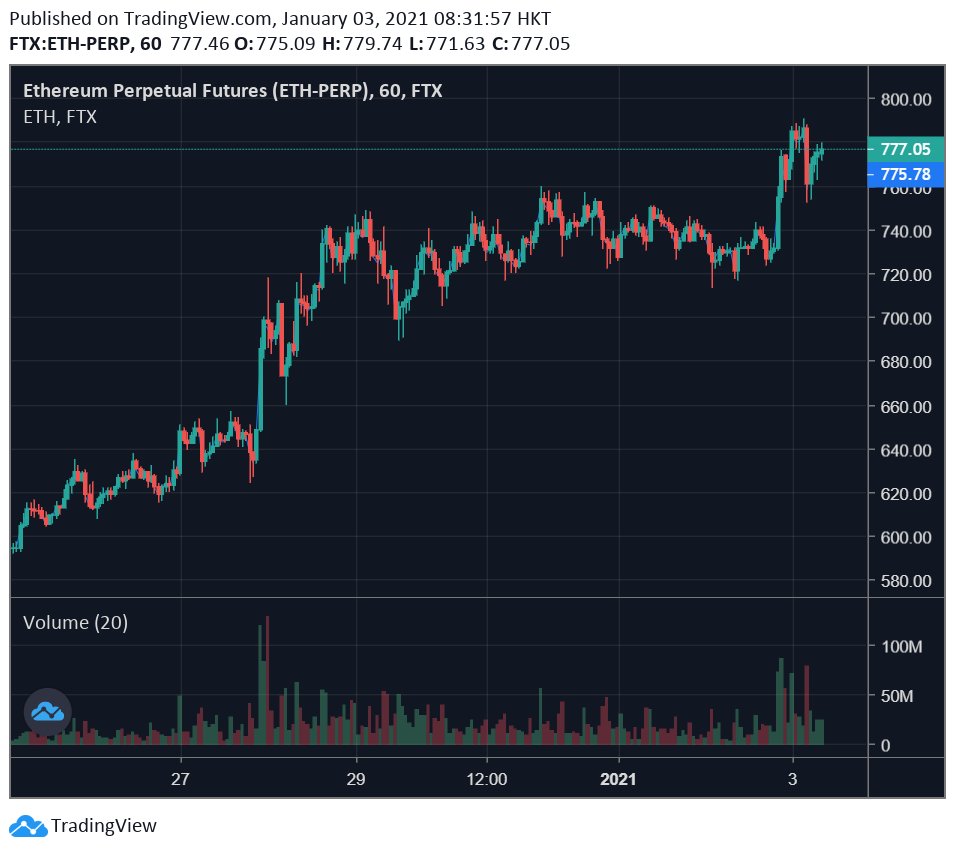 Same with other coins which the U.S. seems alright with -- coins like LTC, BCH, and some other bigger ones. They've done fine in this paradigm, and *if the paradigm( keeps up I expect them to continue.
In the other corner we have noted ugly step-sister XRP. Not much has changed since my incredible Christmas Eve poem, as it's kept under-performing -- it kinda hilariously barely even moved today. Same for some others with bad press like ZEC. 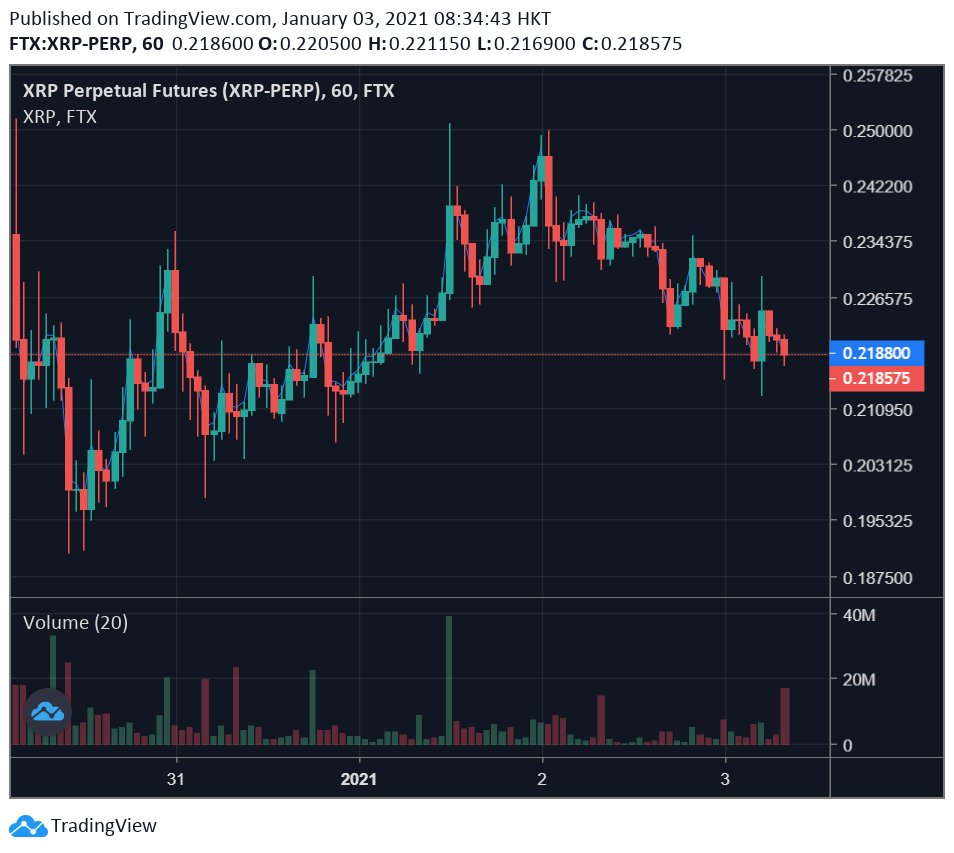 And this is just what I expect -- if this paradigm keeps up, some coins will do well -- the ones the U.S. (or maybe another jurisdiction as things evolve) likes, and others will flounder. And if it doesn't ... why would we expect ANY specific net buying?
So my issue isn't with the idea that *specific* coins might go up -- and anything can of course happen! With so much altcoin leverage small moves can become big ones, and maybe the market will decide XRP is over-impacted -- it could certainly be by now!
... the issue is with the *expectation* that BTC up -> alts up, which it's just not that simple anymore. Alts that are fundamentally "different" from BTC in important ways won't necessarily follow it, and U.S. regulatory opinions are ... now an important way.
So, it seems like the most important thing moving forward is to watch out for signs this paradigm is over or not, and make the bets that that implies. Also, even if it's not over, maybe some coins are too impacted because of liquidations! That's something to watch, too.
It's been a pretty exhausting, wild ride lately, but one which has been super interesting and fulfilling -- and not a bad way to spend the holidays at all.
Also, I'll throw the DOGE a bone here: doesn't whatever the fuck DOGE did today mean any random alts should just be rallying? Isn't DOGE like, THE random alt? Surely if it's doubling everything oughta be. 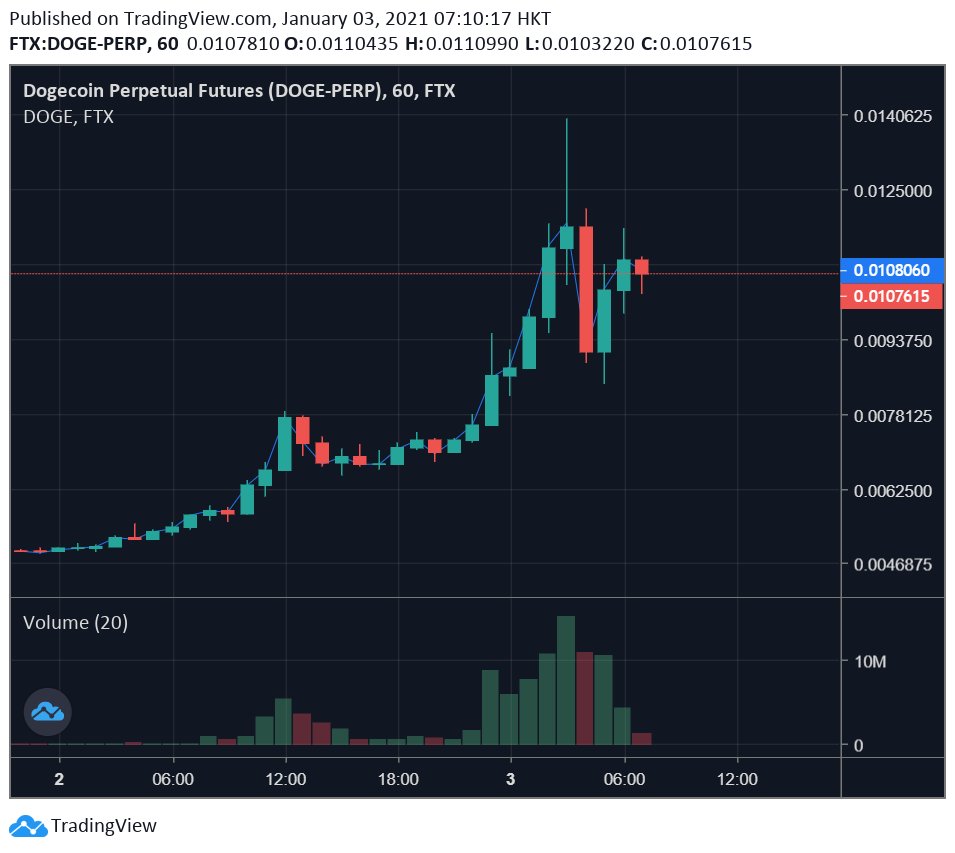 Well, yes and no. Yes, it's obviously like, the prototypical dumb shitcoin. Or maybe it ... was? It's actually gained some U.S. credibility, being popular on Robinhood, and there's certainly a notable American who's a fan ;) @elonmusk
So I actually kinda think this is just another example of a U.S.-friendly alt rallying, except a) it has a TON of liquidations because of high leverage in places like Binance and b) lol it's DOGE of course it's gonna double if it goes up at all. Weird!
You can follow @AlamedaTrabucco.
Tip: mention @twtextapp on a Twitter thread with the keyword “unroll” to get a link to it.