Read on Twitter
Just listened to this excellent @BanklessHQ episode with @rohangrey about the Stable Act and ultimately the relationship between people, money, and the state.

https://shows.banklesshq.com/p/-ethereum-vs-the-stable-act
📺 Ethereum vs the STABLE Act

https://shows.banklesshq.com/p/-ethereum-vs-the-stable-act
First of all, kudos to @RyanSAdams and @TrustlessState for their socratic style of engagement. Giving Rohan the opportunity to open with explaining his values from first principles is commendable.

The biggest surprise for me was to hear that Rohan is pursuing a goal of anonymous digital fiat.

I have that goal! Almost everyone in crypto I know that's given serious thought to the privacy problem of CBDCs has that goal!
Rohan nails it. If CBDCs don't have privacy by default, then states will inevitably build surveillance systems that monitor all our transactions.

Besides being abused by corrupt authorities for their own purposes, they are also targets for hacks. https://twitter.com/zooko/status/1343604265361801217

However, Rohan and I have different playbooks.

He is a fiat insider, and so his approach is to work *within* the existing system and play politics.

I am not a fiat insider, and so my approach is to build *around* the existing system and ship technology.
IMO, the best way to compel the USA to implement privacy by default in their CBDC is to create a viable (and competitive) alternative.

If you can get financial privacy on a public blockchain, your CBDC total surveillance will be a harder sell.

Protecting choice is important.
I'm proud to have helped coordinate the effort within @MolochDAO to source a team to build an Ethereum mixer, which turned into us giving @TornadoCash their first grants.

At $20M in deposits/week that's $1B of private money per year. Not bad for an #Ethereum public good. 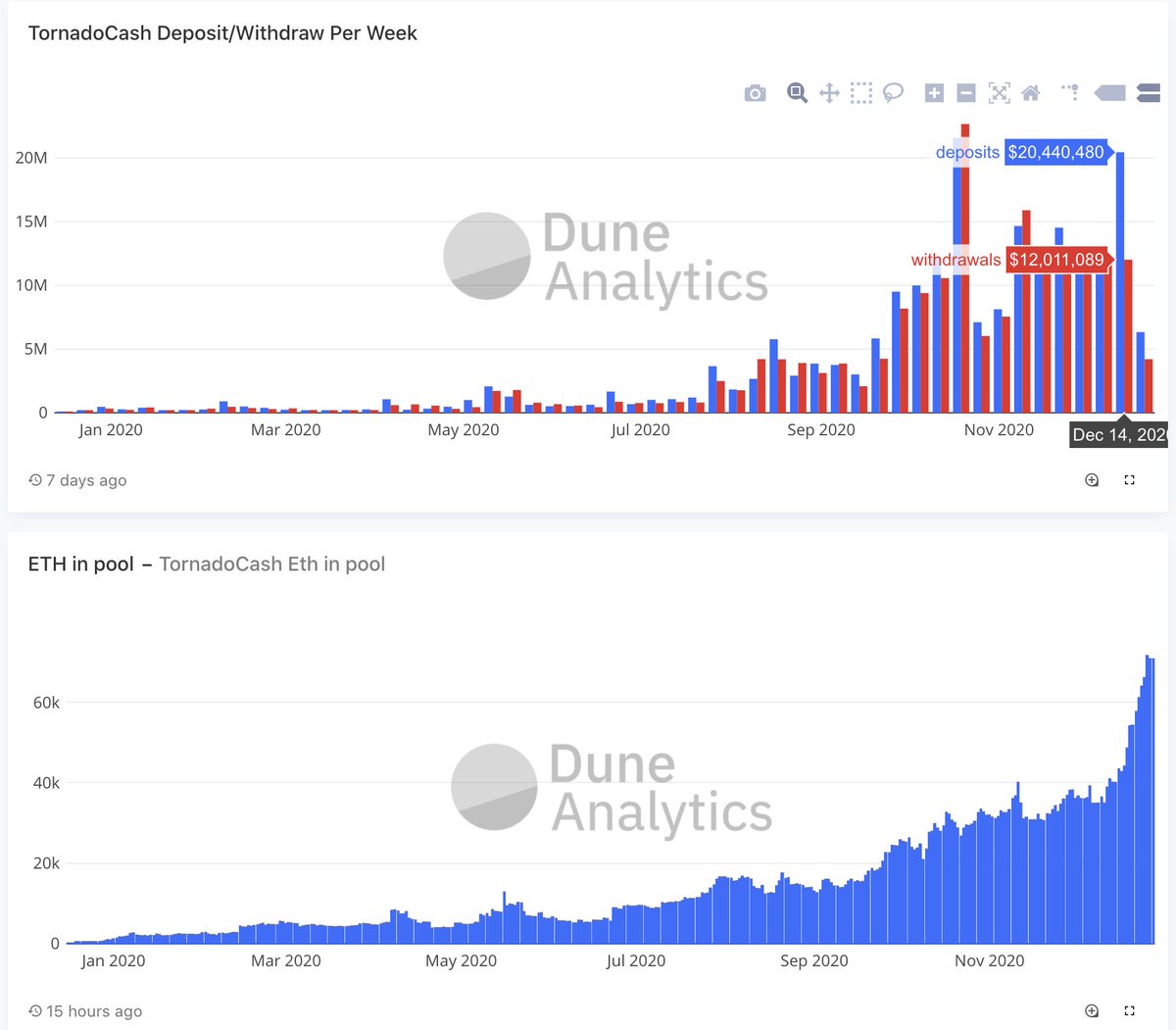 We don't need to wait for Rohan to *convince* USA CBDC policymakers on the merits of anonymous money, we can simply build and use the alternatives today.

And should Rohan fail (which IMO is overwhelmingly likely), we'll be glad we did.
Another surprise was that Rohan sees himself as defending the "little guy".

He doesn't feel that even over-collateralized systems like @MakerDAO sufficiently protect their users from black-swan events, and so users risk holding DAI that no longer is worth $1.
I've voiced similar criticisms of DAI, most comprehensively in my MetaCoin announcement in February.

But despite having the same goals (protect DAI users and the DAI-dependent economy from systemic risk of DAI failing), we again have different solutions. https://ethresear.ch/t/announcing-metacoin-the-governance-minimized-decentralized-stablecoin/6897
Announcing MetaCoin—The Governance-Minimized Decentralized Stablecoin

MetaCoin v0 Of all the stablecoins on Ethereum, the only one that isn’t backed by banked fiat is MakerDAO’s DAI. Instead, DAI is backed by ETH, and the peg to $1 is maintained by the governance of...

https://ethresear.ch/t/announcing-metacoin-the-governance-minimized-decentralized-stablecoin/6897
Rohan would prefer an organization like MakerDAO (if it is allowed to exist at all) be regulated like a bank, and thus have their DAI = $1 deposit claims backed not only by liquidations and potential for global settlement, but by access to the Federal Reserve's balance sheet.
On the other hand, the issues I had with MakerDAO:
- too much centralized collateral
- too much governance control
- USD peg & inability to handle negative interest rates

are pretty much all addressed in our forthcoming fork, RAI

, being built by @reflexerfinance.
For me, it's about running the experiment and letting the best product win, not taking choices away.

Rohan would kill DAI or at least cripple it and force an unnatural dependence on the US monetary authorities.
With RAI, we can potentially compliment DAI by providing a crypto-native stable-ish asset to mitigate the need for centralized collateral sources.

And if RAI works, we may even inspire MakerDAO to implement algorithmic interest rate and negative interest rates for DAI.

Fundamentally, I think the divide between Rohan and the Bankless boys can be attributed to the subtle difference in how they use the word "public".

Rohan exclusively means the US (and maybe her allies).

When the Bankless boys say "public" they mean "everyone on planet Earth".
When you build for Ethereum, you build for the world first, and for any particular country second.

When we build "public infrastructure" we often explicitly attempt to reduce control points that nation states could potentially use to attack the system.
For Ethereans, our ideal protocols looks like *Time*. Time is a language agnostic protocol that exists beyond countries, and sits next to math as a social construct that facilitates human coordination. No one can stop anyone else from using Time, and so no one bothers to try.
Building *global* public infrastructure in adversarial contexts where your adversary could be some control-freak country is why decentralization matters.

If Bitcoin & Ethereum weren't decentralized, they would already be dead.

When Rohan's response to decentralization is "oh yea, then we'll just target all of you", those are fighting words.

We decentralize to make enforcement infeasible, but if they try anyway, then crypto will think of other ways to make enforcement expensive and unattractive...
Rohan's motivation to fight the spread of "counterfeit" USD comes from wanting to protect against "systemic risk".

To me, this pattern matches to something like: "Southerners are concerned that slaves running away to the North introduce systemic risk to their way of life".
Until #Bitcoin

and #Ethereum, those discontent with the current global fiat regime didn't have a good way to coordinate their defection globally. Only now as we start to break free do we see the real chains.

Our defection to crypto is not out of malice, but self-interest. We simply choose freedom. If our freedom poses a systemic risk to your control structures, then perhaps it is your control structures that pose a systemic risk to the free people of the Earth.
To conclude: Rohan might actually be doing us a favor with the Stable Act. It was a mistake for #DeFi be as dependent on USD as we are today, and it is a courtesy of Rohan to remind us of the US policy of "no runaway slaves".

Where we're going, we don't need pegs.
RAI fixes this... 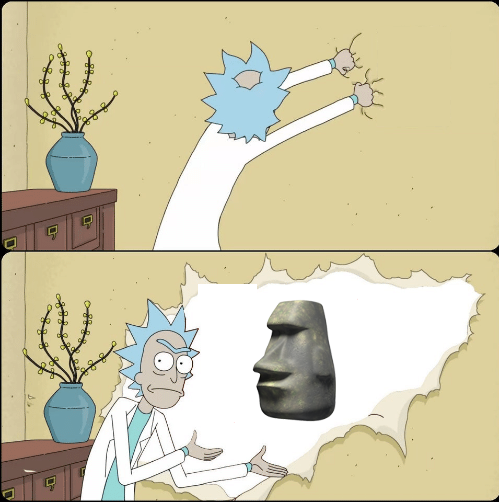 You can follow @ameensol.
Tip: mention @twtextapp on a Twitter thread with the keyword “unroll” to get a link to it.