Read on Twitter
BREAKING: @Facebook just took down two foreign influence ops that it discovered going head to head in the Central African Republic, as well as targeting other countries.

https://graphika.com/reports/more-troll-kombat/
There have been other times when multiple foreign ops have targeted the same country.

But this is the first time we’ve had the chance to watch two foreign operations focused on the same country target *each other*.

In the blue corner, individuals associated w/ the French military.

We removed three separate networks of accounts originating in France and Russia that targeted multiple countries in North Africa and the Middle East.

And they trolled each other. 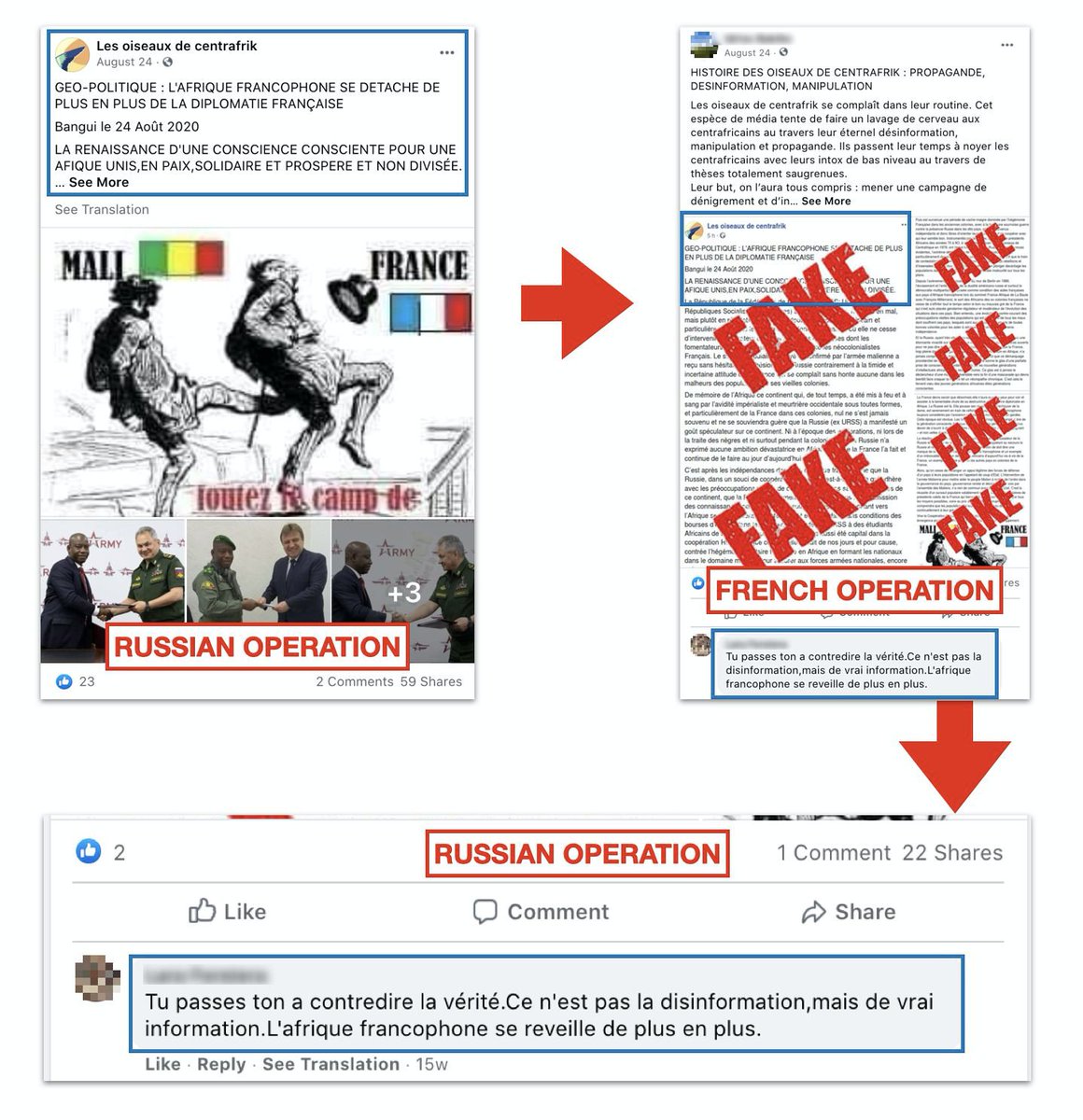 So, background: in October 2019, Facebook took down a bunch of Prigozhin-linked assets across Africa, including CAR.

Our friends at @stanfordio wrote it up at the time. https://cyber.fsi.stanford.edu/io/news/prigozhin-africa
Evidence of Russia-Linked Influence Operations in Africa https://cyber.fsi.stanford.edu/io/news/prigozhin-africa
This fabulous cartoon, about a bear saving a lion from French/U.S. hyenas, was sponsored by Prigozhin firm Lobaye Invest at the time. (h/t @dionnesearcey, who wrote it up for @nytimes in September 2019) 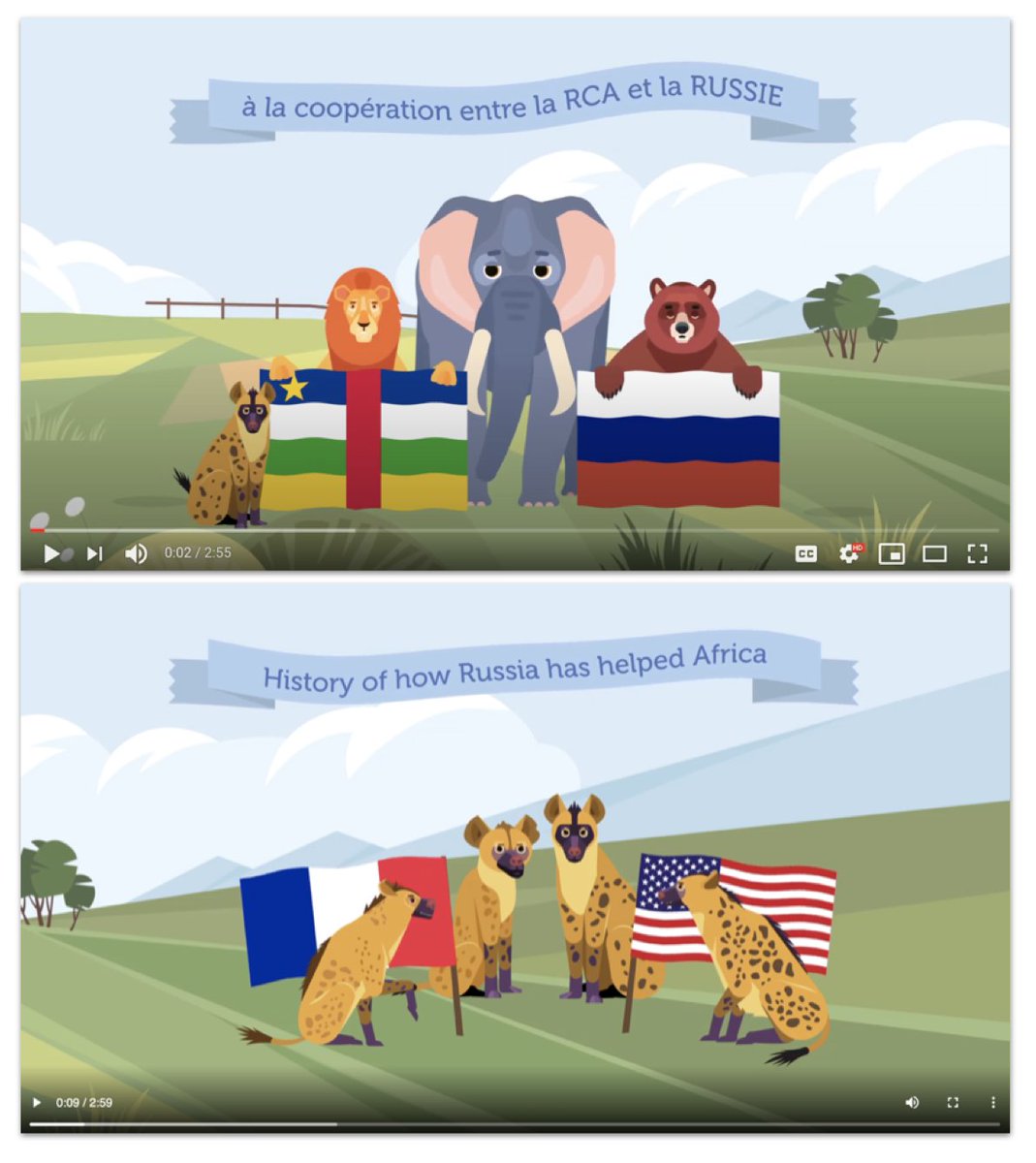 What we didn't know was that there was a recent, fledgling French operation, mostly praising France, sometimes criticising Russia and Prigozhin.

After the FB takedown, they set up a few fake assets to, um, "fight fake news." 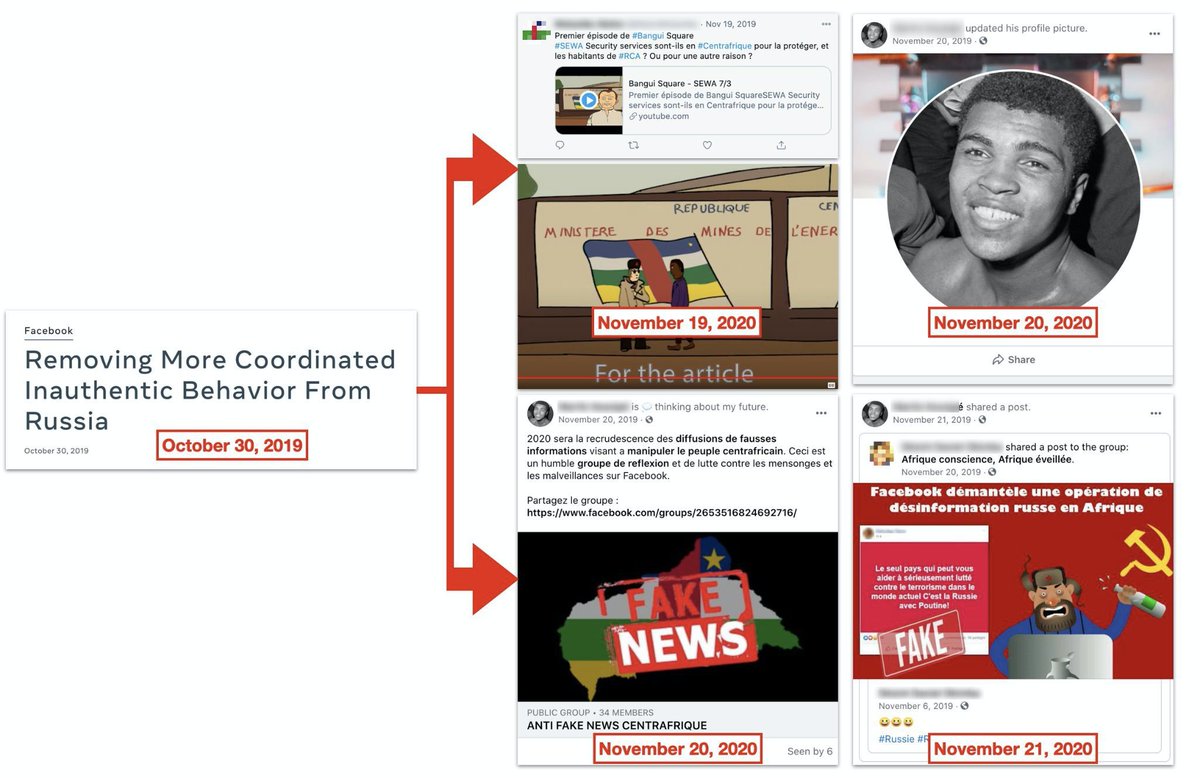 This was definitely a "fight fire with fire" effort.

Their portrayals of Russians were, well... troll-y. 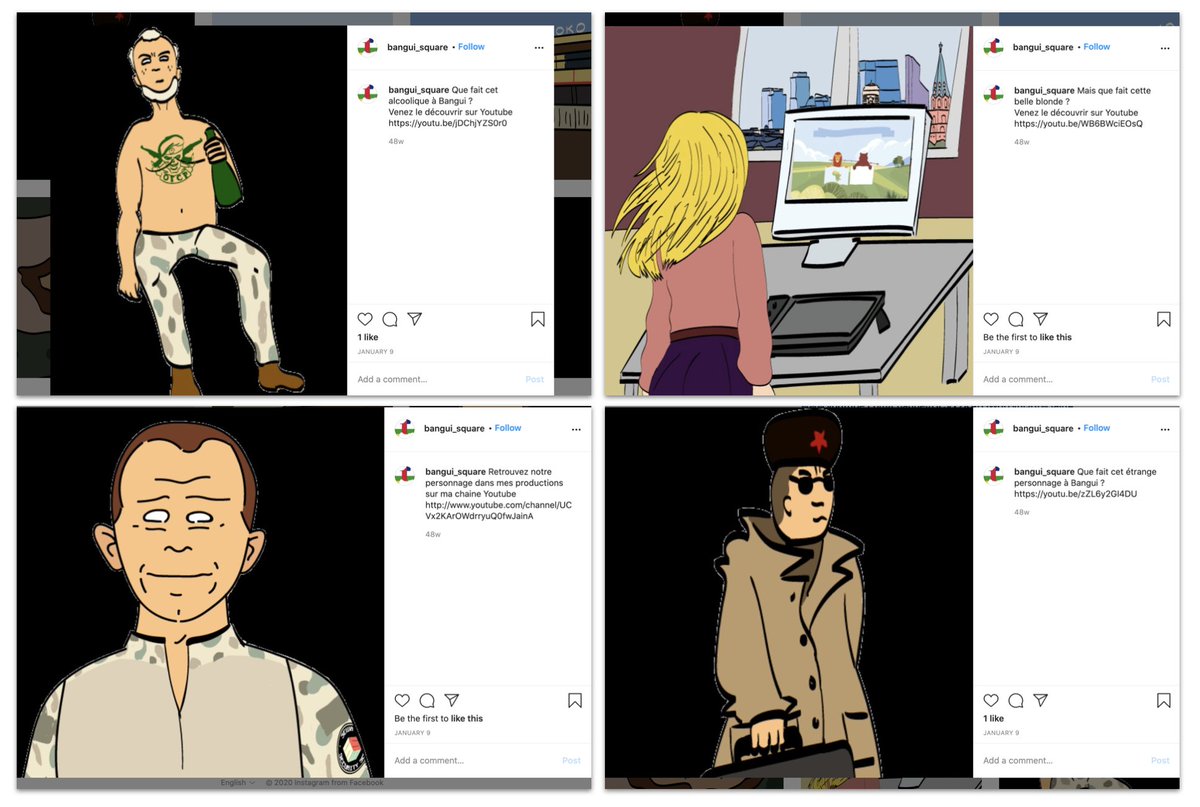 It was also a direct and explicit reaction to the earlier Russian operation. 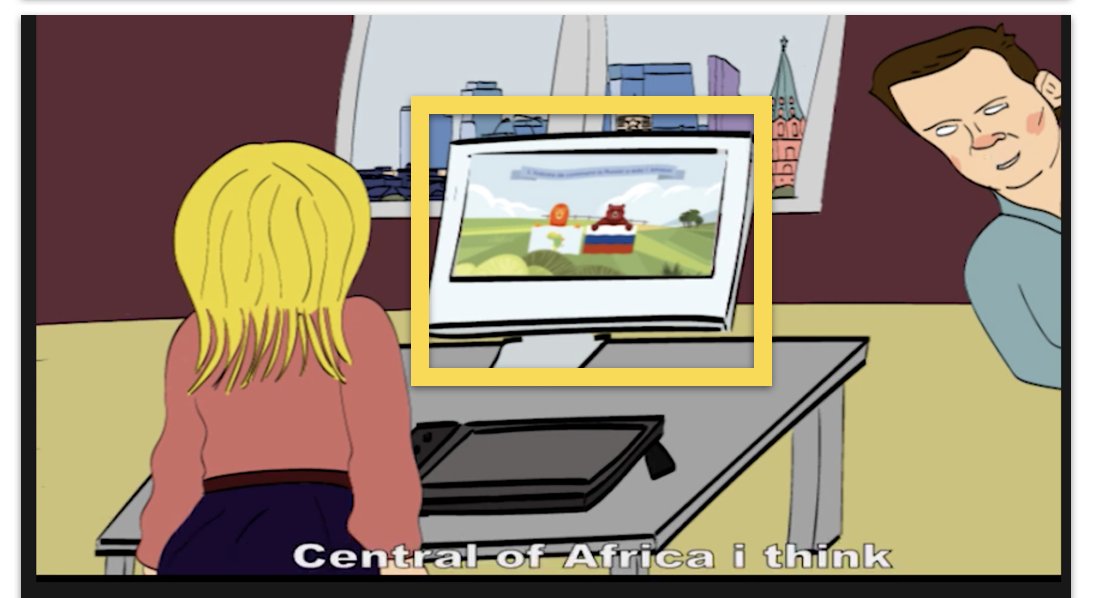 It also focused on the Wagner group and Russian mercenaries. But the methods it used were ... unfortunate.

Left, post by a French asset on "Russian mercenaries arriving in CAR," October.

If you reverse the French photo and compare the backpacks in the background... oops.

That, folks, is disinformation. 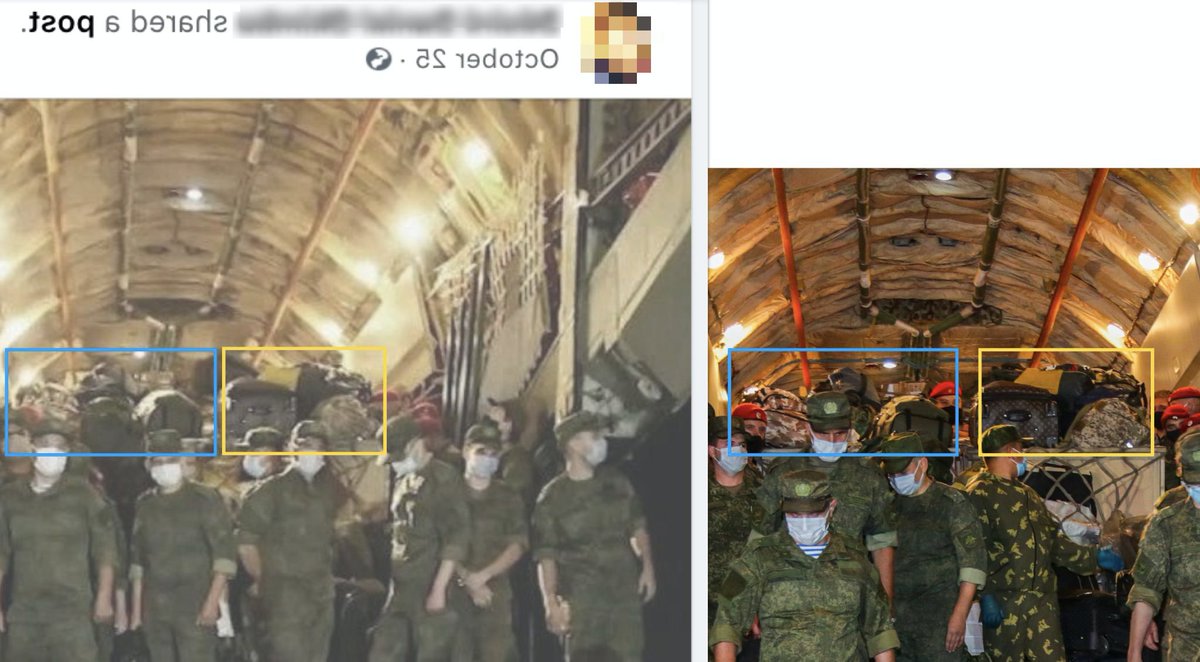 Meanwhile, from January the Russian operation created a bunch of new CAR-focused assets. Trying to rebuild the network.

Unlike the French operation, this one seemed primarily focused on domestic politics, including support for the president. 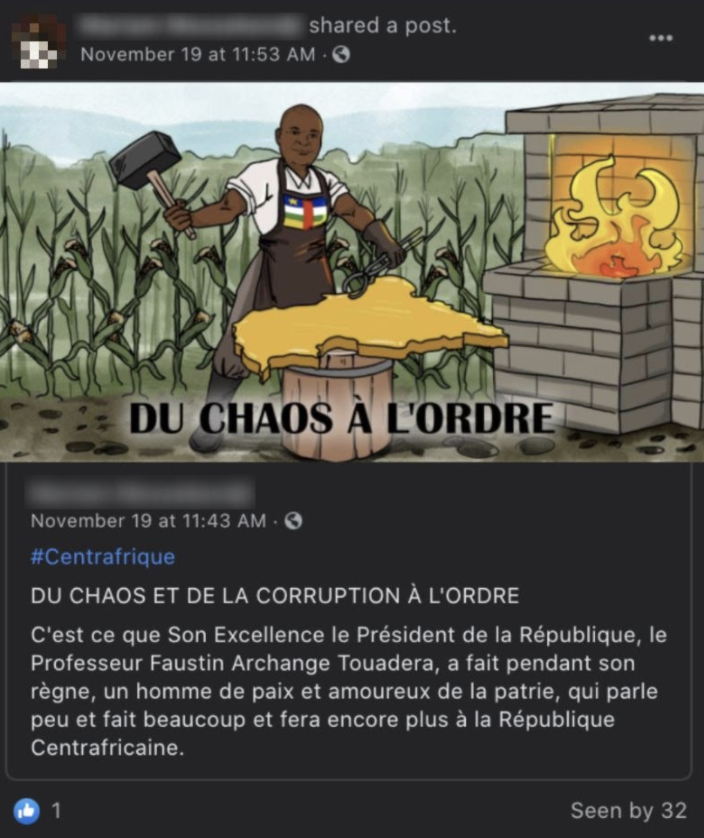 The Russian operation also played up how much good Russia was doing in CAR... 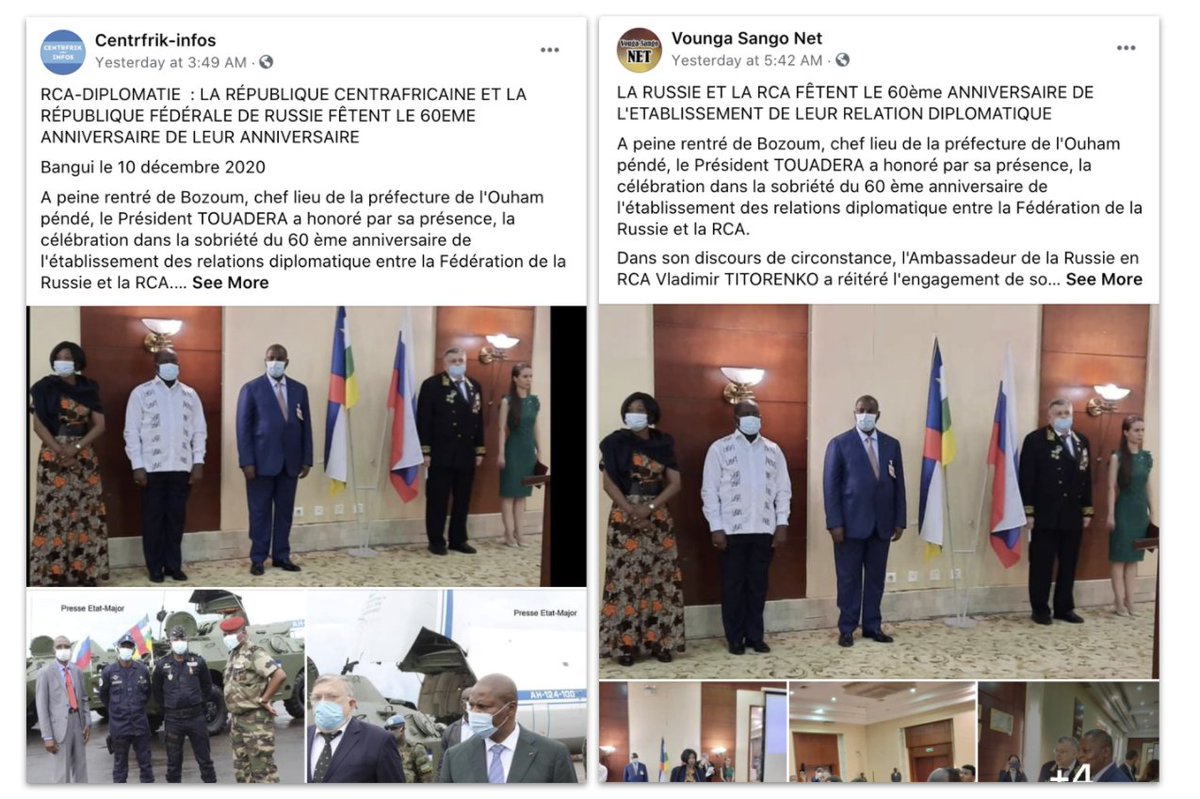 ... and spread negative content about the French , including by accusing them of fake news. 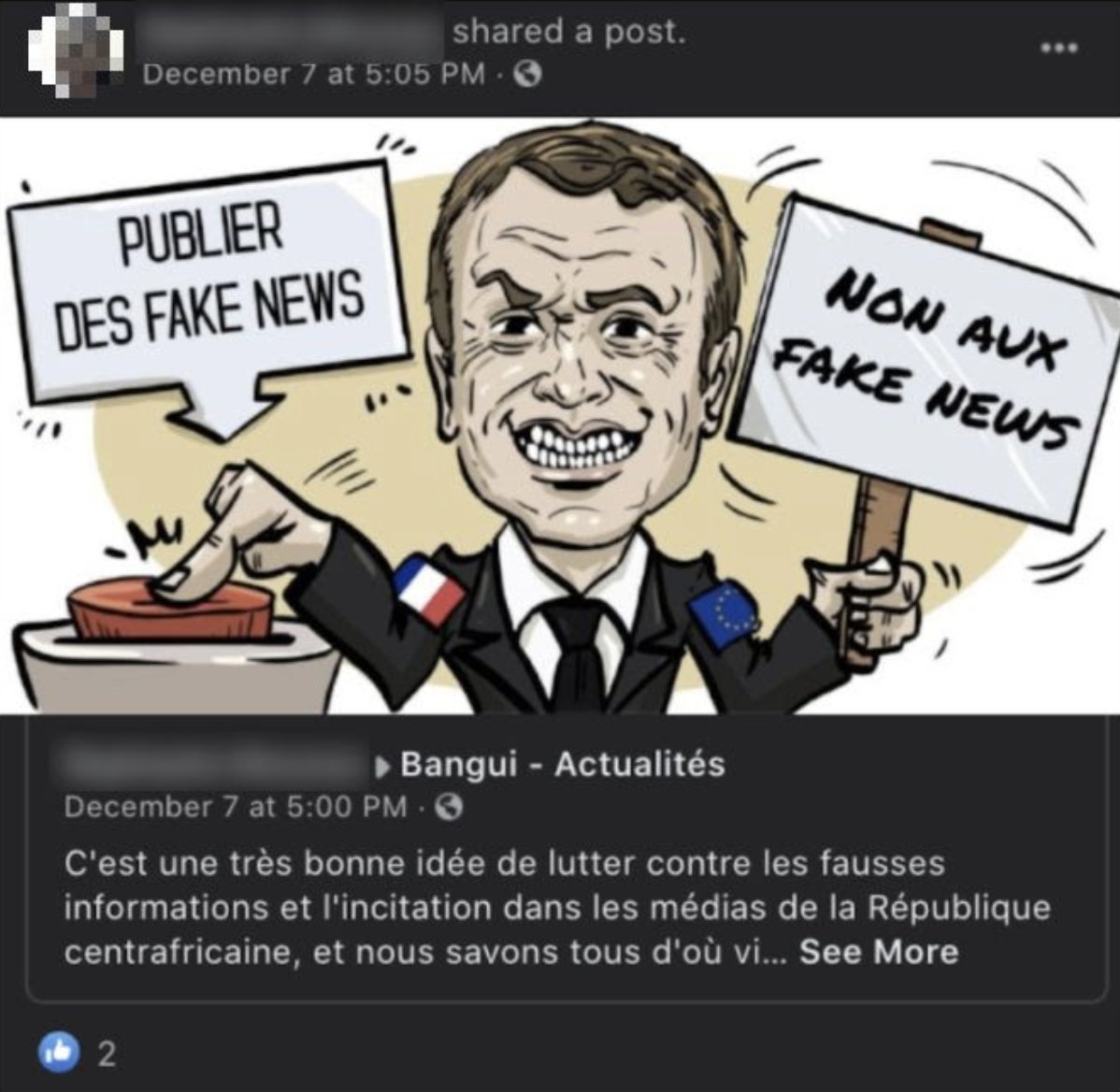 Thing is, the French and Russian ops were posting into the same groups, and liking the same pages.

They even liked *each other*. 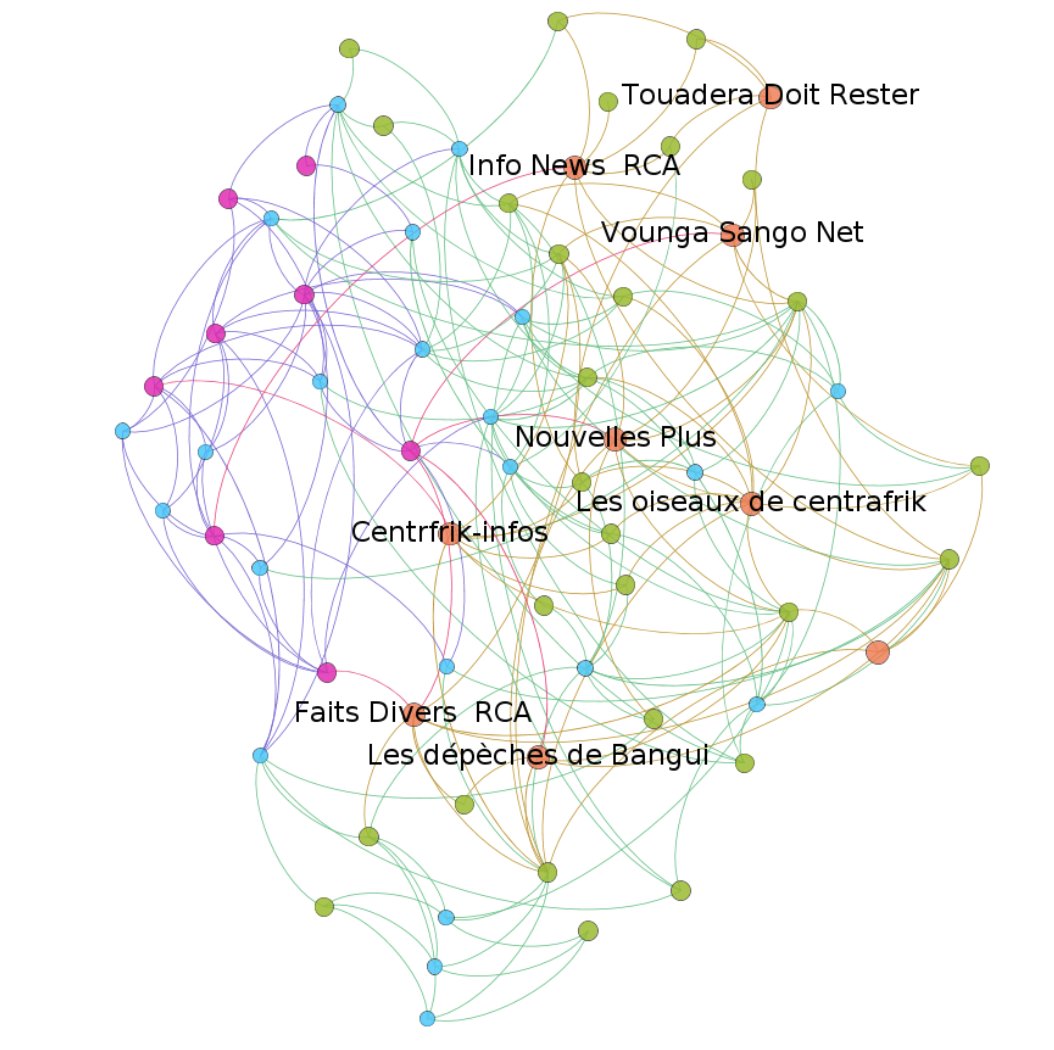 So it wasn't long before they started noticing each other. 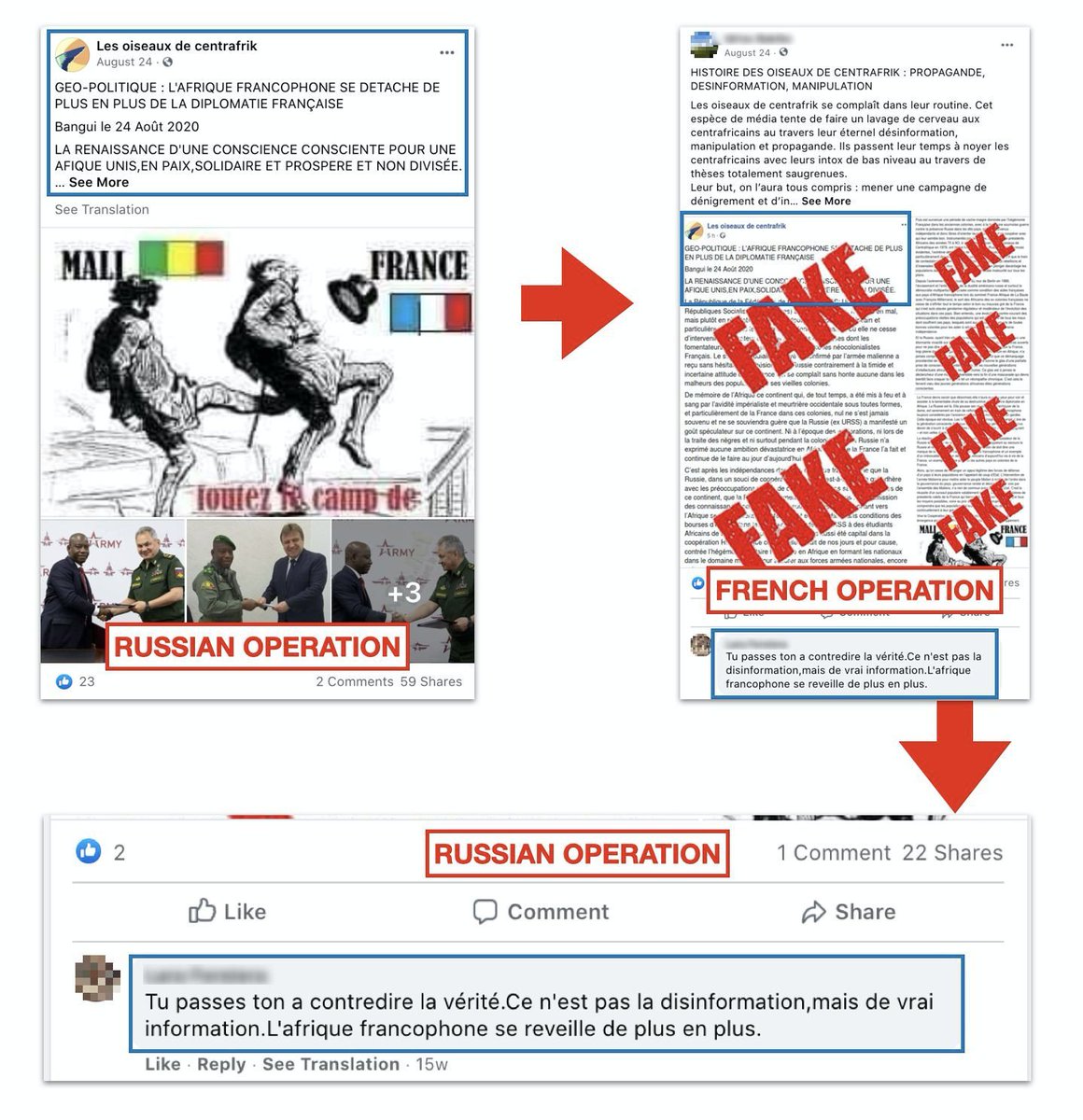 Then it started getting weird. 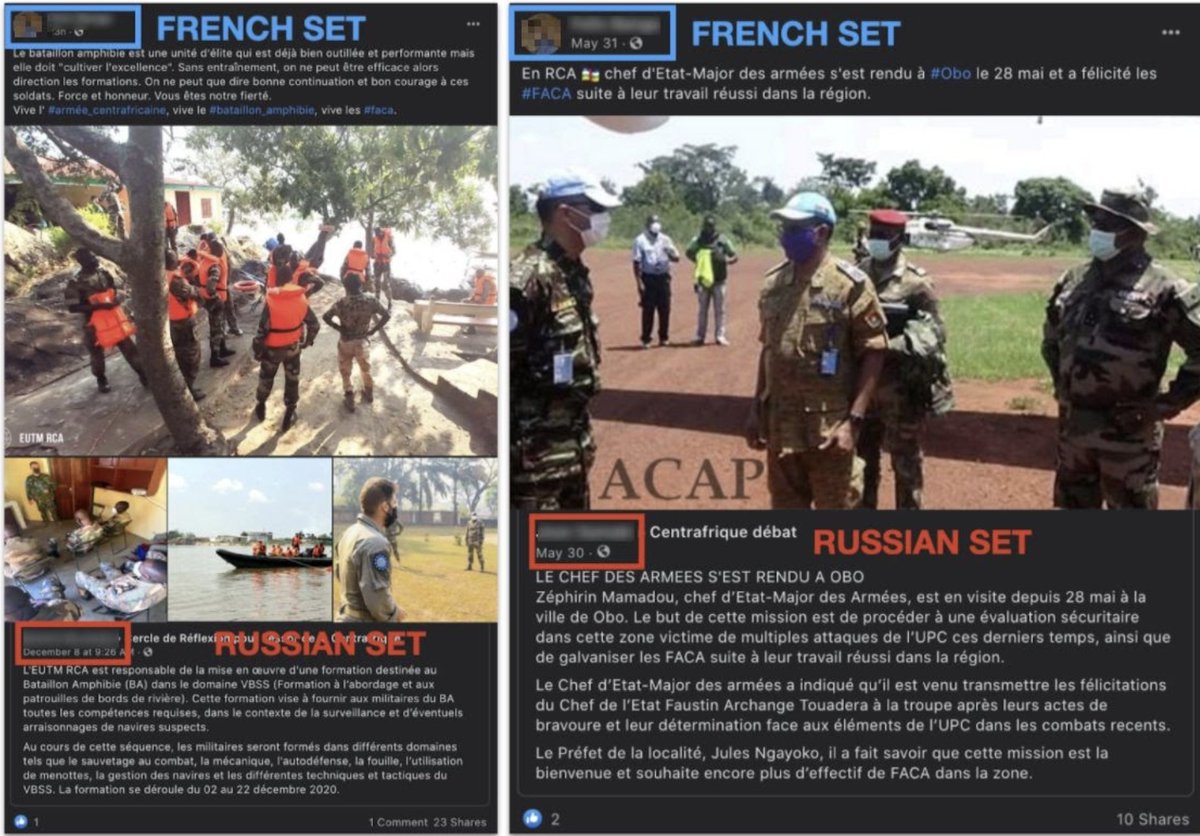 ... and then they friended them.

Fishing for clues?
"I'm not really a troll"?
"I can see your mouse from here"? 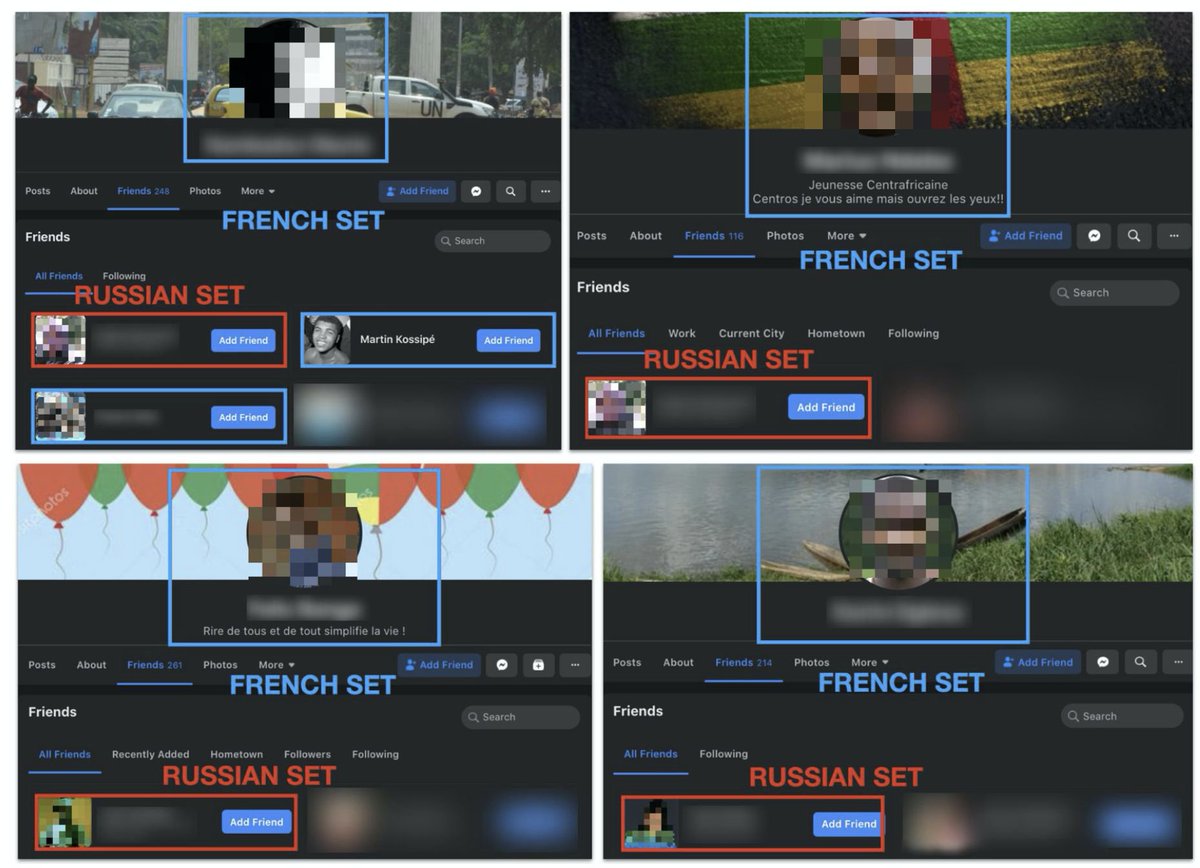 This was the weirdest moment. Russian asset accusing French asset of DM'ing him *to recruit him*.

Never take a troll's word at face value, but if true, this would be fascinating. Who was trolling whom? 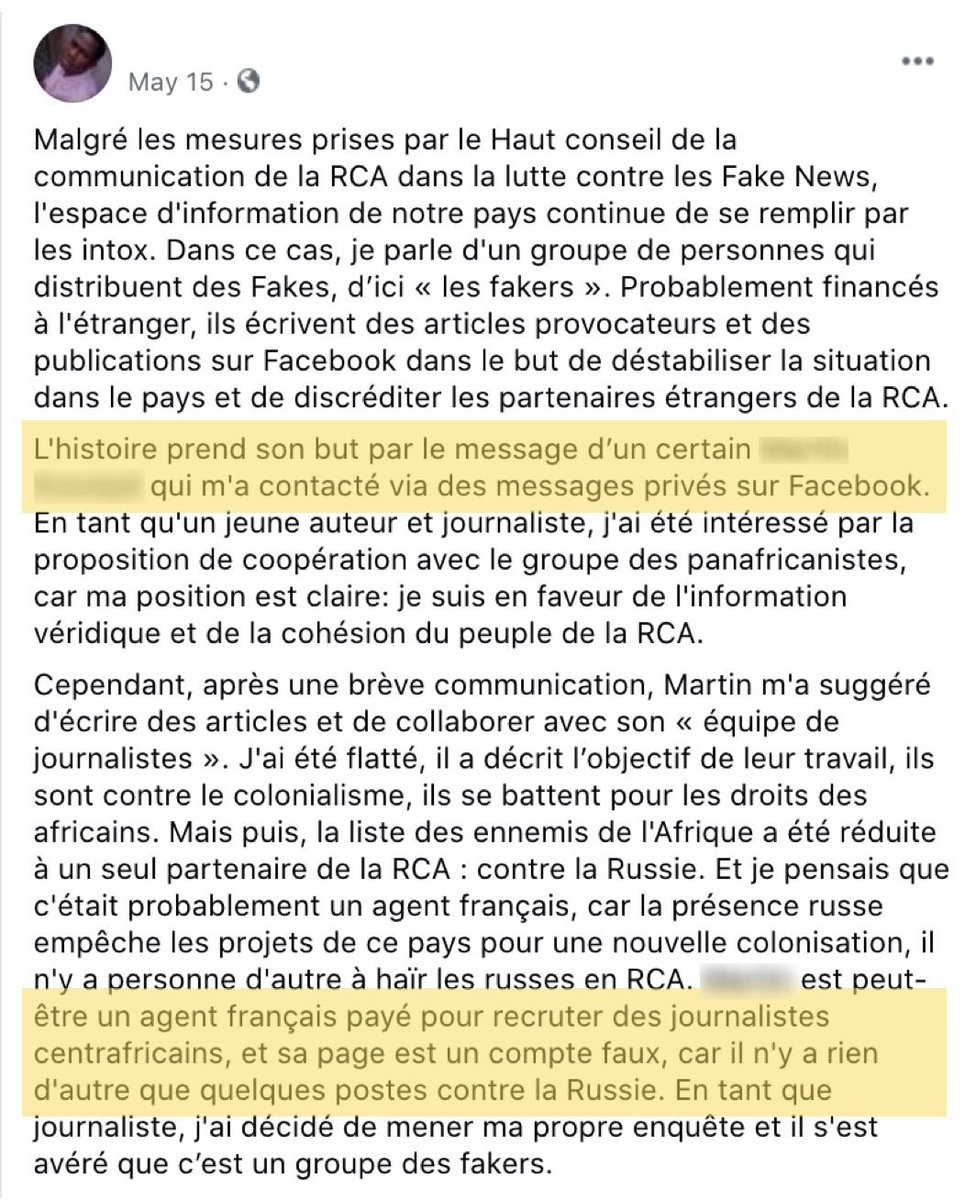 This activity didn't generally get much traction. One Russian asset focused on CAR politics had 50k followers, the rest on both sides were in the hundreds or, at best, low thousands. On YouTube, most videos had a few dozen views; on Twitter, small numbers of retweets. 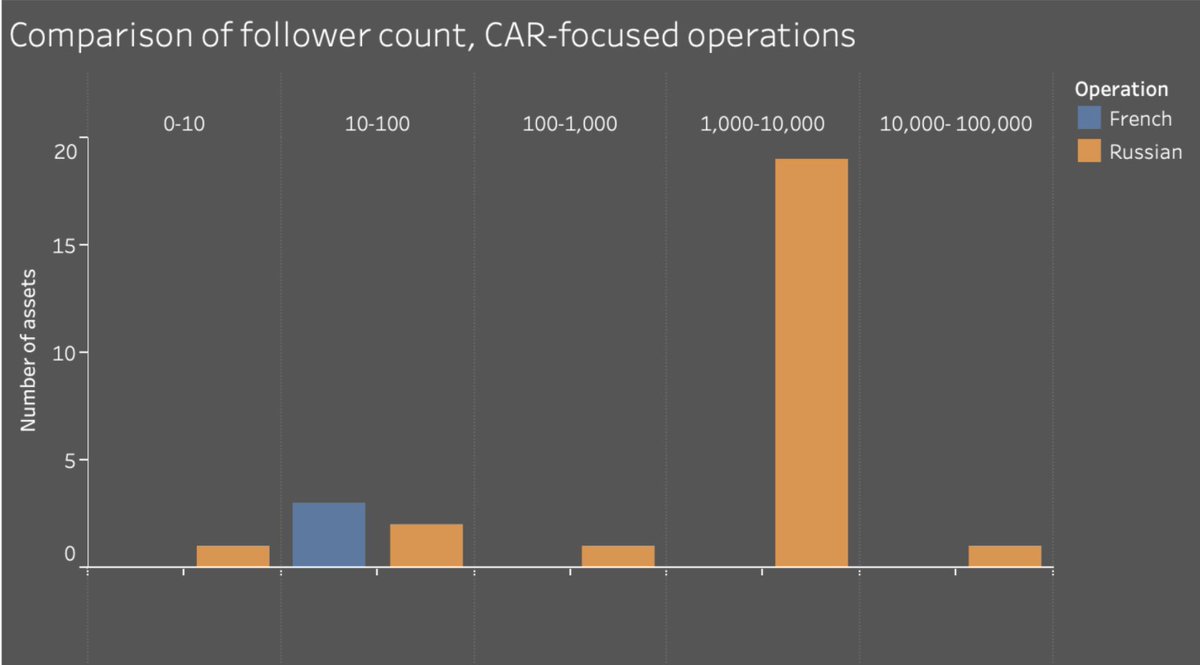 And here's the thing: we're writing about these operations because they got caught and taken down.

Which is what happens when fakes get caught.

Even - perhaps especially - "anti-fake-news" fakes.
This is why fighting fakes with fakes is *not a good idea*. 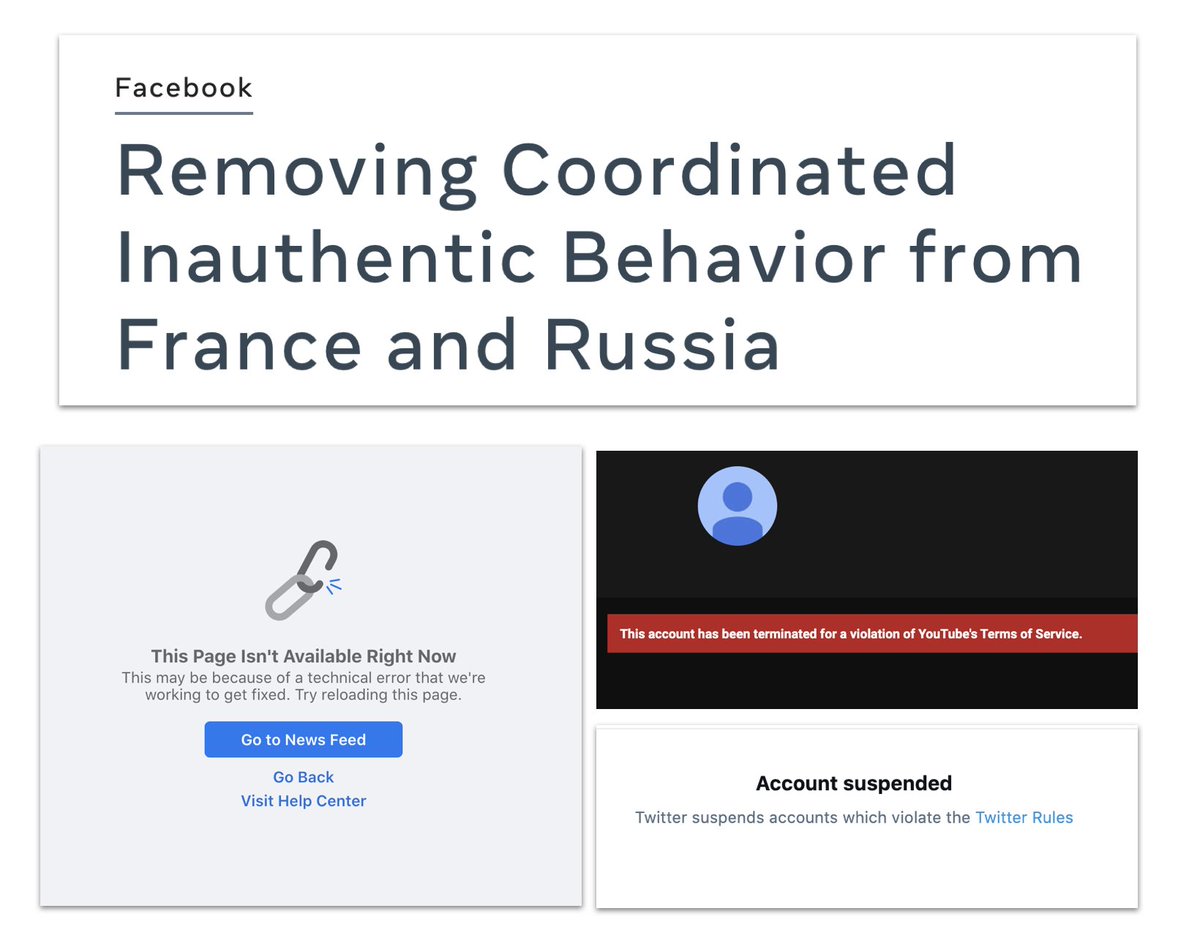 You can follow @benimmo.
Tip: mention @twtextapp on a Twitter thread with the keyword “unroll” to get a link to it.