Read on Twitter
Boozy thoughts on $DOT after soul searching

That leaves $DOT hovering above them like a six-armed god weaving a tapestry of subprotocols https://twitter.com/redphonecrypto/status/1334004740531908608 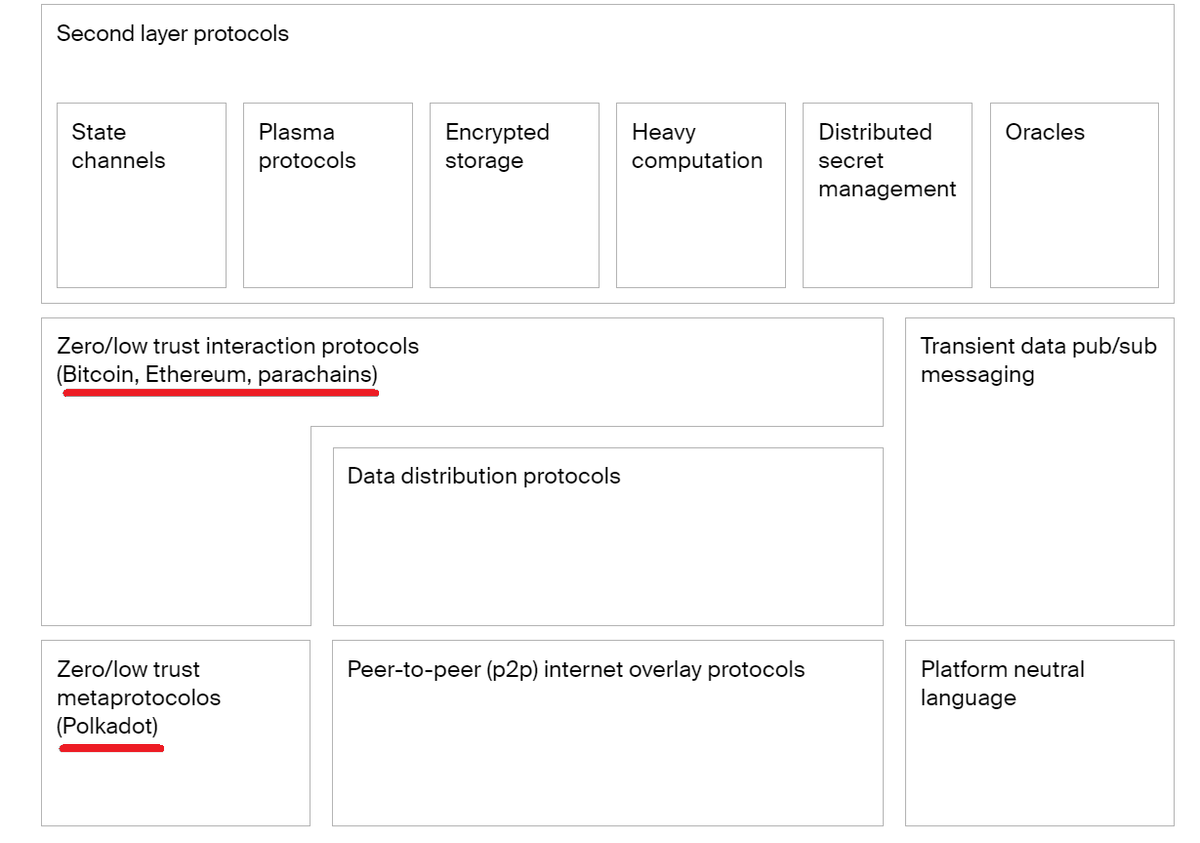 1.5) For now, my mental model of $DOT has shifted from something of an $ETH competitor to a "customizable blockchain in a box" w sharding, inheritable security & interop
2) Devs point to great tooling as a big selling point for $DOT... It's RUST-based, which @daochemist says is great for distributed systems

An explanation of accounts, indices, identity, and reaping

I can't believe how many projects underweight the importance of docs.

You want strangers to use your shit? Document TF out of it

If you have no documentation, you may as well have a closed-source, corporate circle jerk project
4) Tons of respect out there for Gavin Wood. Impossible to get more street cred than him

Vitalik's name may be more common on CT, but as the author of Solidity, Gavin sits beside Vitty on the many golden thrones of ETHlandia

He helped will $ETH into existence. He is legend
5) Most of $DOT's momentum is thanks to funding and very strategic, well-thought hackathons mostly through the Web 3 Foundation

6) @AcalaNetwork and @kusamanetwork are the names that keep popping up as having some visionary badasses involved
7) The upcoming auction could put some upward pressure on $DOT prices. Wouldn't be surprised to see it knock Litecoin out of the No. 5 spot at least for a time
8) After parachains and bridges are live, we could see some interesting projects migrate over. $DOT is EVM compatible, performance will be better, so moving certainly isn't unthinkable so long as there are users and/or demand to be found
9) On the whole, $DOT should enhance the $ETH ecoystem. Some projects will migrate. New ones will be born on $DOT

But $ETH has deep allegiance from OGs, visionaries, fringers, etc

I've always had a view along those lines. Blockchains could evolve much like operating systems.

Apple, Android, Windows, Linux
Maybe $ETH = Linux (which basically runs all the planet's web servers whether you realize it or not)

etc
11) We need good trustless bridges to support the multi-chain vision, and $DOT will help those bridges become a reality

12) $DOT + Metamask will supposedly be a thing. So if $DOT has trustless bridges to other chains, Metamask could become eternal + forever amen and amen
I've said it multiple times, but in this insane world of pegs, bridges, native tokens, synthetic tokens, derivatives, pool tokens, etc, the most important game will be the wallet game

They gotta know that's where we're heading (but if they don't, I'm following @xdefi_wallet, which will support @thorchain_org $RUNE)
13) Most of the $DOT projects didn't start with a ton of $$. Now that their tokens are worth a shitload, the pace will quicken

14) The $DOT ico made some peeps v rich. They could be driving a lot of their newfound capital back into little $DOT startups thereby inflating prices
15) My views on $DOT may be too Western-centric

So their Asia game = strong
Since I'm in the states, that could potentially explain some of the smoke or opacity I feel like exists around $DOT
16) Now, let me remind you I am a

If you're reading this + blindly aping into investments, you might make money

or you might wind up naked, homeless + addicted to drugs

In fact, I may be naked, homeless + addicted to drugs as I write this

But I'm more optimistic about $DOT
It looks legit AF...

to everyone who shared ideas w me, you made this adventure possible

I can't shake the feeling that $DOT offerings are going to get out of hand, though...

Much horseshit will be peddled

The hard part will be separating the good projects from the bad
The badasses among you will get very rich in the process, though

Just remember what I always say:

out
You can follow @redphonecrypto.
Tip: mention @twtextapp on a Twitter thread with the keyword “unroll” to get a link to it.