Read on Twitter
THE IMPORTANCE OF NINTH CHAPTER OF GITA.

In the city of Mahishmati on the banks of Narmada, there lived a Brahmin called Madhav. He was a reputed scholar of Vedas and believed in performing Yagya's. He earned lots of money through his scholarly pursuits. 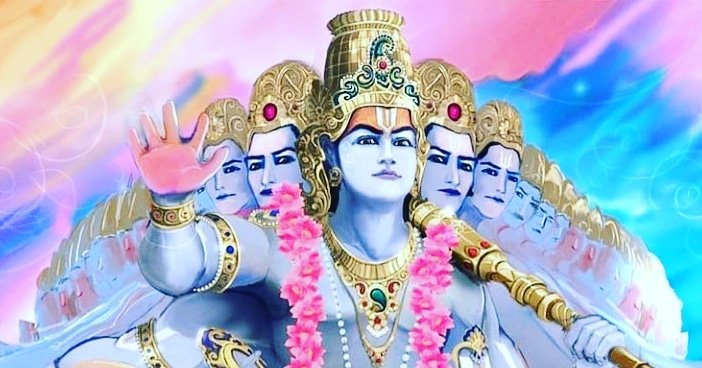 One day he decided to perform Yagya along with offering of Bali or sacrifice. A goat was specially bought for this purpose. When the puja of goat's body began, the goat suddenly started speaking like a human. The goat said that performing only Yagya is useless,
the result of which whither away soon and this is the result of birth death and diseases. After doing so much in previous life today he had become a sacrificial goat. Everyone there were surprised and eager to know more.
Madhav asked the goat to narrate the events of previous birth and why he had come to acquire a goat form. The goat was a cultured Brahmin in previous birth. His wife once requested him to get a goat which she intended to sacrifice in Durga mandir for their son's well being.
As soon the goat was about to be sacrificed, that time the mother of that sacrificial goat cursed the Brahmin to become a goat in the next birth. Although he was born as an animal, he still remembered his previous birth.

The Brahmin who now was a goat again narrated
a story about the importance of ninth chapter of Gita.
In the sacred tirth of Kurukshetra there lived a King called Chandrasharma. During the Sun eclipse or Surya grahan, the King called a learned Brahmin and along with a Purohit went to take a dip in the holy river.
The King bathed and applied white chandan on his body and started doing charity in favour of Kaalpurush. He gave this to the Brahmin also.
But then suddenly a Chaandaal came out of the Kaalpurush's heart. With him even Ninda(criticism) also came out disguised as Chandaali.
They both started entering the Brahmin‘s body. The Brahmin was a devout VISHNU bhakt who always remembered Vishnu. The Brahmin started chanting the ninth chapter of Gita. Both the demons ran away. The King who was amazed at this occurrence wanted to know as to how was
he saved from these demons. The Brahmin replied that it was Paap who had appeared as Chaandaal but the chanting of ninth chapter of Gita that prevented the demons from entering his body.
From that day the King regularly repeated the verses of ninth chapter.
Coming to the earlier story the goat was relieved from sacrifice and all started reading the ninth chapter from then on.

https://www.instagram.com/p/CHvlv07A85t/?igshid=1wri6wo7srzgv
You can follow @Anshulspiritual.
Tip: mention @twtextapp on a Twitter thread with the keyword “unroll” to get a link to it.