Read on Twitter
Broad student loan debt cancellation via executive order is good economics and politics. A thread (with lots of data). 1/
First, it’s important to remember that *a lot* of people have student loan debt -- 45 million or so. For context, 25 million people benefit from the EITC and 38 million people get SNAP. Fundamentally, one of the benefits of debt cancellation is that it helps a lot of people. 2/
Canceling student loan debt has positive income effects. The median borrower making payments has a monthly payment of more than $200. Canceling debt could reduce or eliminate those payments -- which is like sending those people a check every month. 3/

https://ideas.repec.org/p/fip/fedpwp/15-26.html
One study has found that canceling all debt would have a big stimulative effect. The impact would be less if less debt were canceled, but debt cancellation one of the relatively few ways to really stimulate the economy without Congress. 5/

https://rooseveltinstitute.org/2020/10/29/student-debt-is-a-racial-equity-issue-heres-how-mass-debt-relief-can-address-it/
Won’t people be taxed on their canceled debt? No, there are several ways to avoid that, including:

-Deem forgiveness as a disaster payment relating to Covid under IRC 139
-Deem it a qualifying scholarship under IRC 117
-For insolvent taxpayers, exclude under IRC 108 7/
For those concerned about “targeting” student debt cancellation, you can vary the amount of debt cancelled by income level, should you want to. If you’re concerned it won’t help people who never attended college, you could pair it with executive actions that do that. 8/
Some say debt cancellation isn’t well-targeted. Compared to what? Other approaches to provide big stimulus will require Congress, and if that requires negotiating with a R Senate, debt cancellation is likely to be more targeted than the package emerging from those talks. 9/
For example, is it better to do $1 trillion in debt cancellation via executive order or do $500B in child allowances (good!) with another $500B in regressive tax cuts (bad!) to get Republican support? That’s the relevant comparison. 10/
Finally, the politics. First, recall that Trump was so freaked about the popularity of broad debt cancellation that he directed his staff to come up with his own plan. 11/ https://www.washingtonpost.com/local/education/eyeing-populist-challenge-from-the-left-trump-seeks-plan-to-tackle-student-debt/2019/12/05/bbb002f8-16aa-11ea-a659-7d69641c6ff7_story.html
Eyeing populist challenge from the left, Trump seeks plan to tackle student debt

Aides have failed to come up with proposal to counter Democrats’ expansive plans.

https://www.washingtonpost.com/local/education/eyeing-populist-challenge-from-the-left-trump-seeks-plan-to-tackle-student-debt/2019/12/05/bbb002f8-16aa-11ea-a659-7d69641c6ff7_story.html
Trump’s panic is borne out by polls, which shows strong majority support for debt cancellation -- including from those who’ve never had student debt. (Perhaps the average American is less resentful than the median Twitter commentator.) 12/ https://www.cnbc.com/2019/05/09/elizabeth-warrens-plan-to-cancel-student-debt-popular-with-voters.html
Elizabeth Warren's plan to cancel student debt is popular with voters, survey finds

The majority of American voters support Elizabeth Warren's student debt cancellation proposal — even those who've never taken out loans themselves.

https://www.cnbc.com/2019/05/09/elizabeth-warrens-plan-to-cancel-student-debt-popular-with-voters.html
And here’s polling data by demographic. Debt cancellation has the highest approval among people making under $50k/year and among people who don’t have a college degree (many of whom have debt because they didn’t complete college or because they're co-signing for their kids). 13/ 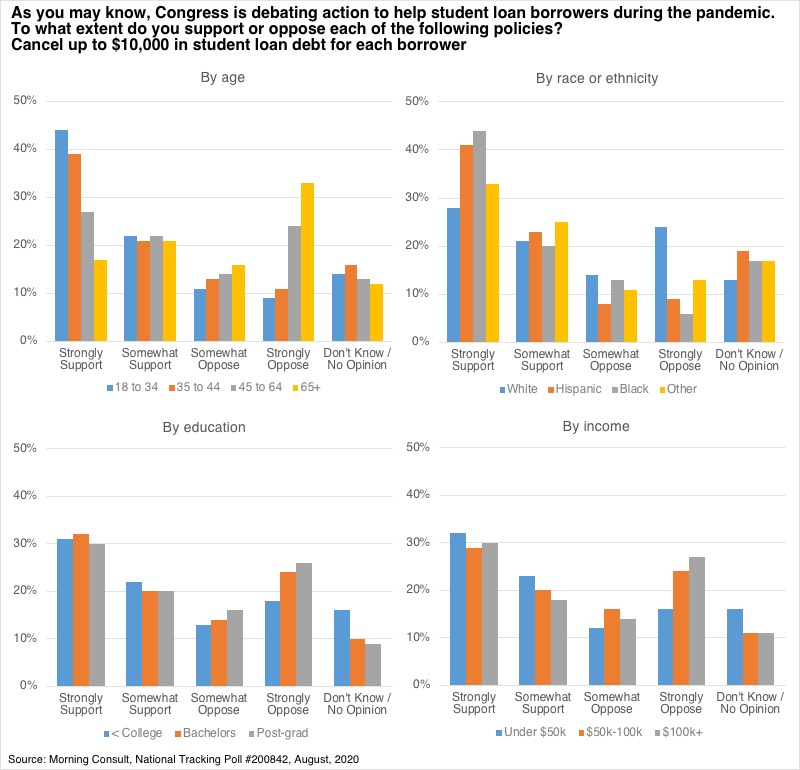 The bottom line is that broad debt cancellation via executive order is popular, economically potent, and -- most importantly -- life-changing for millions of Americans struggling through this crisis. We can’t let the perfect be the enemy of the good. END
You can follow @BharatRamamurti.
Tip: mention @twtextapp on a Twitter thread with the keyword “unroll” to get a link to it.