Read on Twitter
1/A few thoughts on the autogolpe...

Trump's first strategy for autogolpe was "Stop the count!!!". It failed.

His second strategy was to sue to have votes thrown out. That is in the process of failing.

So what are his remaining strategies? I can think of three...
2/One strategy is trying to persuade electors to be "faithless electors".

That's doomed to failure, since electors are very hard to persuade to flip, Biden's lead is quite large, and many states have laws against faithless electors.

3/Another strategy, of course, is to do the traditional state-of-emergency, tanks-in-the-streets sort of thing.

But even if Trump were brave enough to do that, there's no way that would succeed. The military won't have it.

4/So as I see it, this leaves him just one strategy:

Try to bully GOP-controlled state legislators into seating fake electors instead of the ones chosen by the voters. https://www.politico.com/news/2020/11/11/the-completely-insane-electoral-college-strategy-436156
Opinion | The Completely Insane Electoral College Strategy

The Constitution theoretically gives state legislatures great power over elections, but that’s not a reason to precipitate a constitutional crisis.

https://www.politico.com/news/2020/11/11/the-completely-insane-electoral-college-strategy-436156
5/This is probably illegal, and as @greg_doucette has explained in a long series of threads, it would probably end up with Acting President Nancy Pelosi. https://twitter.com/greg_doucette/status/1326990012848672768

6/BUT, does that mean Trump won't try it?

I think he'll still try it, because has to try something, and this is the only thing he can try that won't obviously and quickly end in failure.

Also it uses the only real tool in his arsenal: Bullying Republicans into falling in line.
7/Faithless electors require Trump to bully Dem-selected electors, which he can't.

Tanks-in-the-streets requires him to bully the military, which he can't.

Lawfare requires he bully courts, which he can't.

But elected Republicans? Those he can definitely bully. So he will.
8/Now, I don't know whether he'll be able to bully GOP-controlled state legislatures into seating fake electors. The Pennsylvania State Senate Majority Leader, for example, said he wouldn't do this. (Hopefully he won't change his mind.) https://pittsburgh.cbslocal.com/2020/11/10/pa-electoral-college-popular-vote/
Governor To Follow Law Of Certifying Electoral Votes Of Pennsylvania Popular Vote Winner

For months, there has been talk swirling that if Joe Biden wins Pennsylvania, Republicans in the state legislature could bypass the popular vote and appoint electors who are favorable to President...

https://pittsburgh.cbslocal.com/2020/11/10/pa-electoral-college-popular-vote/
9/Of states that Biden won, five -- Pennsylvania, Michigan, Wisconsin, Georgia, and Arizona -- have GOP-controlled state legislatures. Of those, GA and AZ have Republican governors as well.

So it's not just PA we have to worry about here. 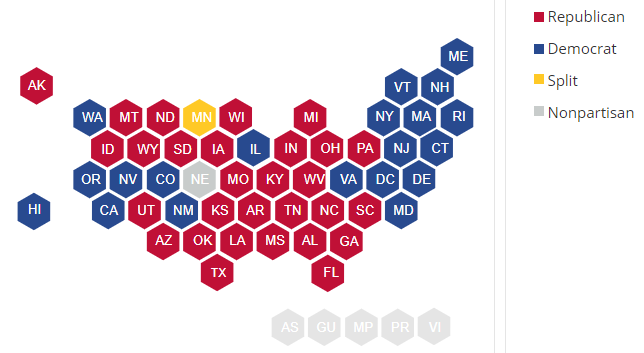 10/Now, as I mentioned above, there's a very good chance this strategy will fail.

BUT:
1. If it fails it will not fail immediately
2. It's not 100% guaranteed to fail, given the vagueness of election law
3. It only requires bullying elected Republicans.
11/Thus, unless Trump wants to throw in the towel or rely on a strategy that he knows 100% will fail (faithless electors), he'll try the "fake electors" strategy.

In fact, Lindsey Graham and Ron DeSantis have already been kinda-sorta calling for this. https://www.politico.com/news/2020/11/10/pennsylvania-gop-rallies-trumps-defense-435864
Pennsylvania GOP rallies to Trump’s defense

Republican state legislators are calling for an audit of the presidential election results to be completed before electors are seated.

https://www.politico.com/news/2020/11/10/pennsylvania-gop-rallies-trumps-defense-435864
12/Assuming that Trump's rule is "push wherever it's easiest to push", and that his main tactic is bullying elected Republicans, I think we can expect the "fake elector" strategy to be the main focus of the autogolpe from here on out.

And if it fails, the autogolpe fails.

(end)
You can follow @Noahpinion.
Tip: mention @twtextapp on a Twitter thread with the keyword “unroll” to get a link to it.