Read on Twitter
Elon: <some journalists are only interested in innuendo, namecalling, and outright falsehoods about me; I'm done being nice to them>

@nickbilton : <writes article full of innuendo, name calling, and outright falsehoods, while damning Musk for not being nice to people like him> 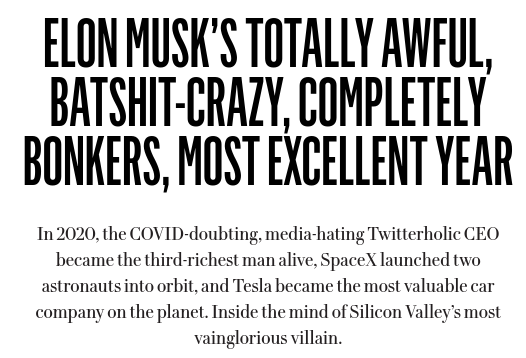 The lack of self-awareness by @nickbilton is staggering.

Or maybe he literally is this blind to his extensive use of innuendo, name calling, and outright falsehoods? Nick, would it help if I held up a mirror to you and your work?
"vainglorious" - @elonmusk's Twitter feed is a *constant* stream of him pushing away praise of himself and heaping it on others. Here, less than 24 hours ago:

"villain" - Gee, why would Elon think negatively of you?

"He told ... Joe Rogan that the actual mortality rate from coronavirus differed from projections “by at least a factor of 10, maybe a factor of 50.” (A statement that is completely fabricated."

The official CDC IFR *is* an order of magnitude lower than early estimates.
"cave rescuer" - Wrong. Unsworth was an amateur speunkeler. He assisted the rescue program but was not himself a rescuer. You also leave out that Unsworth *started the whole thing* by lying on TV about Musk getting kicked out and telling him to shove his sub up his arse.
"he got high" - Anyone who actually watched the video can tell he didn't inhale. He demonstrated little knowledge, not even knowing what a blunt was. And he explained that he doesn't like pot because it robs productivity.
"including alcohol" - Almost the entire US population sometimes consumes alcohol. Bringing it up is to imply he's an alcoholic, which is, of course, libel.

"LSD, as the singer Azealia Banks has claimed" - Sourcing a claim to Azealia is like sourcing David Icke
"Whatever his drug of choice" - Here you keep going on with the "try to pretend that he's a druggie, despite all evidence. Hint: you can't be a hyperproductive workaholic and simultaeously spend all your time drunk and high. But you know that. You just want to imply.
"On earnings calls this year, he has constantly interrupted analysts" - Wrong. He did it a single time. But nice work pretending it's "consistent", because "once" doesn't work as well for a smear.

"charged with fraud" - Settled with no admission of wrongdoing.
"$40 million in penalties" - $20M. Come on, are you incapable of getting basic facts right? It was $20M to Musk and $20M to Tesla. Musk chose to buy $20M of Tesla stock to make it up to the company. Ironically profiting greatly on that.
"he refused to send employees home" - Wrong

You neglect, of course to mention A) the federal government said they never should have been shut down, B) the state wanted them open, C) the city wanted them open, D) Tesla was the *last* automaker to reopen.
A single paragraph alone then contains all these descriptions of Musk: “degenerate", "uncomfortable", "bully”, "pathological sociopathy", and "don’t at their core give a flying fuck about you or me as individuals.”

Now why should he like reporters like you?
"Musk .. started blocking many of the reporters who had covered the trial or who covered his companies, including Ryan Mac of BuzzFeed" - You mean the guy that published his off-the-record emails?

"Lora Kolodny" - the woman who blocks everyone on Twitter who's pro-Tesla?
"Dana Hull" - I guess her 90% negative coverage is better than Lora's 100%?

"finished trying to be nice to the journalists, seeing them as biased against him. (How very Trump of him.)" - Gee, I can't see why! BTW, nice tie-him-in-to-someone-people-hate there.
"Teslarati, which often read more like a press release from Tesla than journalism" - come on then, @nickbilton, I'll take you up on that challenge. Show me a higher error rate on @Teslarati than your articles.
"He went from aiming to be on the cover of magazines" - Since when?

"coddle the alt-right, men’s rights activists, and random conspiracy theorists" - I notice you didn't even try to come up with examples.
"Like a child covering his ears and yelling “la-la-la-la-la-la” " - Journalism, ladies and gentlemen. This guy considers himself a journalist.

"Musk publicly responded that she had made a mistake and the plane was actually an “SR-71.” Then called her his "powerful faerie queen"
(BTW, digging into people's personal lives? Not as endearing to the subjects as you might be imaging)

"Musk has lost more than two dozen executives at Tesla"

Tesla has hundreds of executives. There's nothing abnormal about the turnover rate at Tesla vs. the rest of Silicon V.
'Musk replied: “Does a crazy person ever look in the mirror and know that he’s crazy?” Perhaps this is really the most important mission Musk is on. To never have to answer that question.' - Thus @nickbilton concludes his "Gee, why does @elonmusk hate us?" article.
Again, Nick... are you seriously this incapable of introspection? Because while your position at Vanity Fair certainly gives you the bully pulpit, it doesn't mean that you have to literally act like a bully. Want to be treated as a legitimate journalist? God's sake, act like one.
@threadreaderapp unroll
You can follow @enn_nafnlaus.
Tip: mention @twtextapp on a Twitter thread with the keyword “unroll” to get a link to it.