Read on Twitter
1/ Working in climate, I’m often asked why I care about climate change. My honest answer: because there are no aliens.

2/ It starts with the Fermi Paradox, which asks: if there are billions of stars with billions of planets, shouldn’t Life be somewhat common? That being the case, why haven’t we found any evidence of life? As Enrico Fermi famously put it: “Where is everybody?”
3/ There are many proposed explanations that attempt to resolve the Fermi Paradox. @robinhanson 's The Great Filter is the one I’ve spent the most time thinking about.
4/ In a nutshell, the evolution of life on Earth happened because Earth satisfied a great number of small ‘filters’ — the right distance from the sun, the right orbital shape that doesn’t take us outside of the inhabitable zone, the right mineral composition, etc etc.
5/ Hanson proposes the existence of a Great Filter, a tremendous hurdle that life must overcome in order to reach intelligence and make its presence felt among the stars. This Great Filter is either behind us (the genesis of life) or ahead of us (likely self-destruction).
6/ What does this have to do with climate change?
7/ As I ponder Fermi’s Paradox and the Great Filter, I gain a profound appreciation for the incredible rarity of Life on Earth. In the entire known universe, we’re it. Completely alone in our ability to marvel the wonder of existence.
8/ This beautiful thing we call Life is worth preserving. Luckily, Life’s most fundamental drive is self-preservation. And the best way to ensure your continued existence is to expand your footprint.
9/ More than anything else, expansion decreases risk of extinction. The more distributed you are as a species, the more resilient you are to extinction.
10/ Evolution is the engine that propels Life on the one way road towards expansion. And where evolution is a continuous process, expansion is more step-change in nature. The major step-change expansions are the transitions from sea > land > sky > stars.
11/ Now this is where I’ll say something controversial: climate change is an existential threat, but not in the way you likely think. Climate change is a low probability first-order existential threat, and higher probability second-order existential threat.
12/ The first-order threat is the direct threat posed to human life by severe climate impacts. Desertification. Extreme weather events. Earth becoming uninhabitable. However, as many have observed, Earth at its worst is still more habitable than Mars at its best.
13/ Human life would likely continue uninterrupted despite the worst possible effects of climate change, albeit in a much diminished capacity. This is obviously worth avoiding at all costs; no sane person wants to see what post-apocalyptic society looks like in practice.
14/ The hidden existential risk is second-order.
15/ While we may survive a nuclear winter, we’re one black swan cosmic event away from oblivion at all times. Not only humanity’s extinction, but that of Life as we know it. All of our eggs are in one Big Proverbial Basket – Earth.
16/ Colonizing space is of cardinal importance because it reduces the risk that Life as we know it ceases to exist. Not just our species, but all of them.
17/ To use @nntaleb 's metaphor from The Black Swan, planet Earth is a plump Thanksgiving turkey. 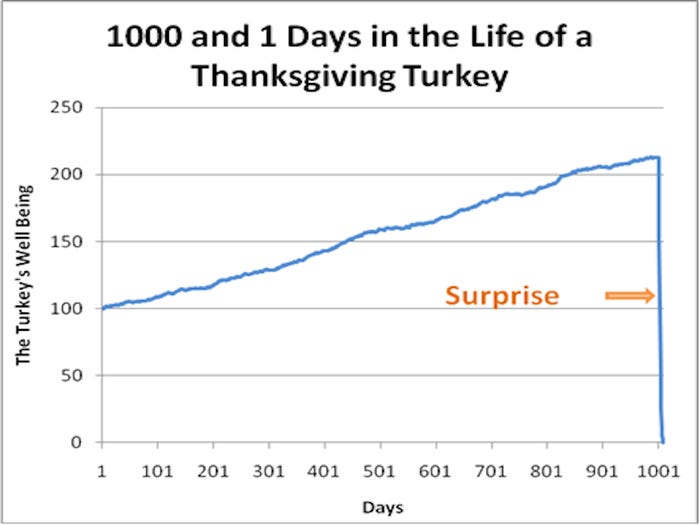 18/ Climate-induced social unrest could suspend progress towards space for generations. The longer we are confined to one planet, the more likely such a scenario becomes.
19/ We are now teetering on the edge of the expanding to the stars. I consider myself part of the luckiest generation in history, the stewards and only conscious observers of a remarkable once-in-history step-change on Life’s path.
20/ Successfully mitigating climate change expands this window of opportunity for Life to find fertile ground in the stars. By this logic, fighting climate change and advancing space travel are perfect complements.
21/ It’s no surprise that the world’s leading climate technology company and the world’s leading space technology company are both run by the same person. (Paging @elonmusk)
22/ For my part, I choose to focus on climate. Because there are no aliens but us.
23/ Postscript
Some argue that resources spent on space colonization are wasteful or even unethical. @ModeledBehavior has written on the subject at least a couple times:

and https://www.forbes.com/sites/modeledbehavior/2017/05/06/sorry-nerds-but-colonizing-other-planets-is-not-a-good-plan/#7dfbc6ed51e6
Sorry Nerds, But Colonizing Other Planets Is Not A Good Plan

Despite Stephen Hawking's warnings, it is hard to come up with a scenario where evacuating the earth makes the most sense.

https://www.forbes.com/sites/modeledbehavior/2018/05/27/dear-jeff-bezos-forget-about-the-stupid-moon/#677bc63e325f
24/ What Ozimek doesn’t seem to appreciate is that space colonization is not an investment, but an insurance policy. Like car insurance, you shouldn’t expect to recoup your insurance premium...
25/ In fact, you should hope not to, because collecting payment means you’ve been in an accident.
26/ The resources we put to work on space exploration and fighting climate aren’t expected to earn a return on investment, they’re expected to mitigate tail risk.
27/ In 2020 NASA had a $22.6 billion budget and NOAA a $5.4 billion budget, a combined 0.58% of the $4.79 trillion federal budget. We can afford that hedge.

In the context of single-planetary Life, we really can’t afford an accident.
28/ Also available as a Medium post: https://scotthickle.medium.com/
Scott Hickle – Medium

https://scotthickle.medium.com/
You can follow @ScottHickle.
Tip: mention @twtextapp on a Twitter thread with the keyword “unroll” to get a link to it.