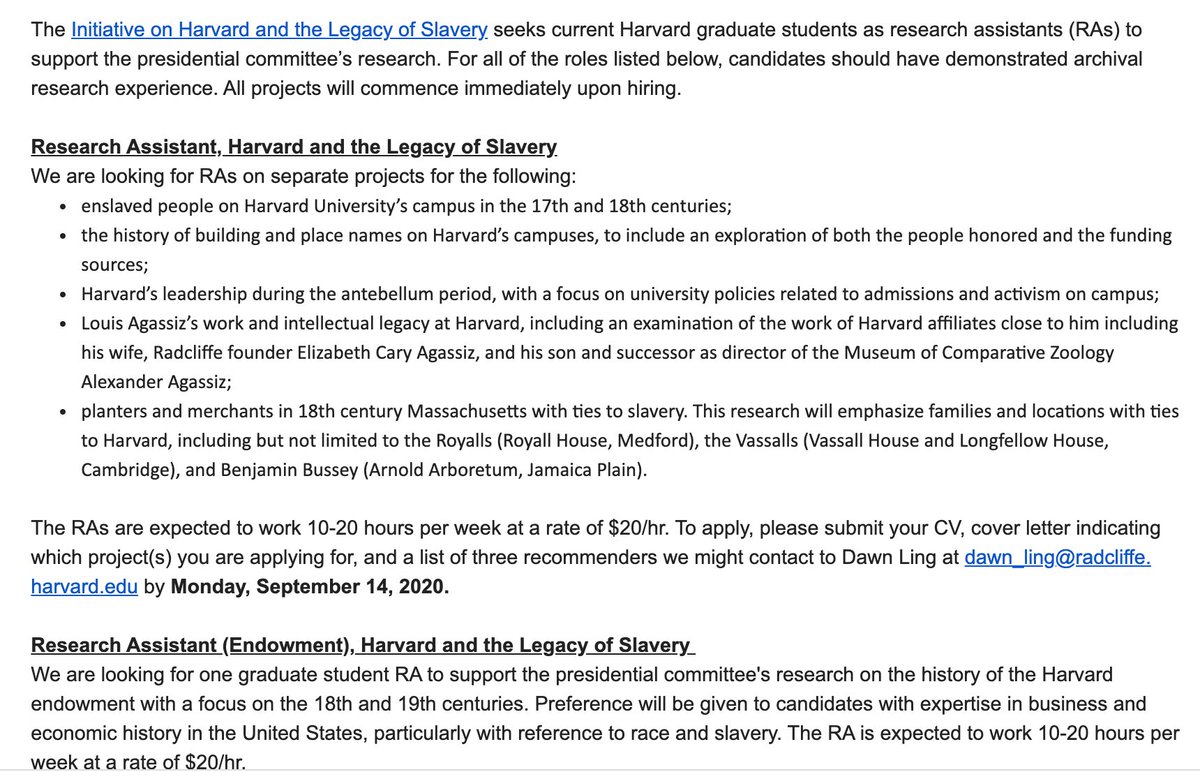 1) Your research will be a smokescreen for Harvard to say they are working on Harvard and Slavery, but you will not receive the resources and opportunities you need to be successful. Your cheap ($20/hr) labor will cover for Harvard's failure to invest in long-term sustainability.
2) Since 2007, Harvard has fobbed off this work on students rather than investing in the sort of faculty committees doing similar work at places like UVA, Wm&Mary, Georgetown, etc. Harvard has repeatedly refused to hold public events, or even create a stable website.
3) One of the tactics Harvard uses to stall is by cultivating an environment of perpetual newness. They pretend this is all brand new and you're starting from scratch. Don't fall for it! Make sure they show you all the work that's been done before before you replicate it!
4) You will be pressured to produce bad history. Right in the job posting it says they'll be asking for research on "Harvard's leadership." When I was writing the Harvard and Slavery report, I was pressured to include a section on abolitionists to make Harvard feel better.
5) They will retaliate if you talk about Reparations. After I submitted a letter listing possible reparative actions, I was excluded from further meetings — as in, the admins would meet to discuss my work and refuse to tell me the meeting time/place. They don't want to hear it.
6) You can do good and important work, but know what you're getting into. You're there to make Harvard look good. You will not be supported if you talk about reparations or Harvard's current actions.

Make sure you retain all rights to your work and that Harvard cannot bury it.
If you are a Harvard student applying for this job, I am happy to answer questions via DM.

- dissections and the use of human remains as teaching tools

- everything ever touched by Jeffries Wyman, founding curator of the Peabody Museum

- ongoing lawsuits against Harvard re: Harvard and Slavery

- research into Harvard's emotional investment in claiming abolitionist roots
I should specify here that the people at the Harvard Archives, as well as other archivists/librarians/faculty I worked with were helpful and eager to do real work. The problems were mostly from the structure of the project and from admins in the President's office.
Harvard can and will research anything forever and ever and ever. It is a way of never having to specify what reparations they intend to pay. https://twitter.com/cgdhopkins/status/1266864187596308481?s=20

You can follow @cgdhopkins.
Tip: mention @twtextapp on a Twitter thread with the keyword “unroll” to get a link to it.