Read on Twitter
In 1920, long before Bernie Madoff was born, an Italian immigrant named Charles Ponzi was concocting a scheme to make himself rich.

Ponzi's eponymous scheme would inspire fraudsters like Madoff for years to come.

Since arriving in America from Italy, his life had been a series of flops. By 1918, when he moved to Boston, he had served time in prison in both Canada and the US.

But his confidence never faded. Soon, he had hatched his next plan. 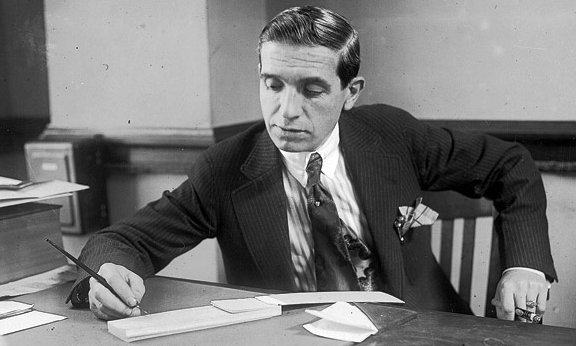 They were created by the postal authority to enable immigrants to more easily and cost effectively correspond with relatives back home.
3/ Charles Ponzi noticed an arbitrage opportunity.

You could use dollars to buy PRCs in Europe, come to America, and then redeem the PRCs in America for postage more valuable than what you paid in Europe.

He just needed investors and capital to execute the plan!
4/ Ponzi created a company - the Securities Exchange Company* - and began pitching investors on PRCs, the opportunity of a lifetime.

*Note: The irony of the SEC abbreviation is amazing.
5/ In February 1920, soon after launch, with his smile and easy confidence, he had taken in $5K from investors.

But executing the PRC arbitrage would be logistically challenging. So he didn't do it.

Instead, he used new investor funds to show returns to the original investors.
6/ Overjoyed by their "returns," early investors rolled their gains into new investments with the company.

Then they told all of their friends about the incredible opportunity.

The party was on for Charles Ponzi!

July: $3M
7/ Money poured in from investors across New England.

From policemen to factory workers to housewives, everyone wanted access to Mr. Ponzi's offering.

The Boston Post printed articles questioning the legitimacy of the returns.

Ever the confidence man, Charles Ponzi famously served coffee and donuts to a line of investors awaiting withdrawals.
9/ With no new money coming in to meet investor demands, Charles Ponzi was declared insolvent and arrested, his brazen fraud finally exposed.

The entire episode lasted just ~8 months, but Ponzi had managed to take in millions.

All without buying a single Postal Reply Coupon!
10/ And so the "Ponzi Scheme" was born.

Future fraudsters like Bernie Madoff would use this blueprint - using new money to provide returns to old money - but with ever increasing scale ($60B+ in Madoff's case!).
11/ After serving his prison sentence in America, Charles Ponzi was deported back to Italy.

His final words for reporters: "I went looking for trouble, and I got it."

He died in 1949 at the age of 67, alone and penniless, but his eponymous scheme lives on in infamy.
12/ That is the story of Charles Ponzi and the background behind the "Ponzi Scheme" that is so often talked about in the modern financial world.

I hope you enjoyed it.

Stay tuned for more!
You can follow @SahilBloom.
Tip: mention @twtextapp on a Twitter thread with the keyword “unroll” to get a link to it.