Read on Twitter
Left unchecked, the transition to an automated labor force could see the rich aggregate a critical mass of financial and political capital, with those without means falling deeper into poverty without solvent social safety nets.
/1
Couple automation with a pandemic that prohibits human proximity and the question arrises: How many jobs will never return an a #postdemic world?
/2 https://twitter.com/august_cole/status/1288114087616843777?s=20

When a corporation makes the choices to replace human labor with robotic, mechanized or automated processes during an economic crisis, they prioritize 'optimization of processes' over 'optimization of society-writ-large' vis-à-vis their own employees.
/3 https://techcrunch.com/2020/07/27/ford-to-use-boston-dynamics-dog-like-robots-to-map-their-manufacturing-facilities/
Ford to use Boston Dynamics’ dog-like robots to map their manufacturing facilities

Ford is going to employ two of Boston Dynamics’ ‘Spot’ robots, which are four-legged, dog-like walking robots that weigh roughly 70 lbs each, to help them update the original engineering plans for...

https://techcrunch.com/2020/07/27/ford-to-use-boston-dynamics-dog-like-robots-to-map-their-manufacturing-facilities/
The microeconomic becomes the macroeconomic: Individuals deprived on wages (many who already face debt liabilities) are forced to collect -instead of contribute to- social programs; states will see a reduction in tax revenue decreasing the long-term solvency these programs.
/4
To complicate matters, a plutocratic hostility based on a cult of automation arrises from the new-money billionaire class who have ingrained and ingratiated themselves with governments through infrastructure and defense contracts. They now command the wealth of nations. 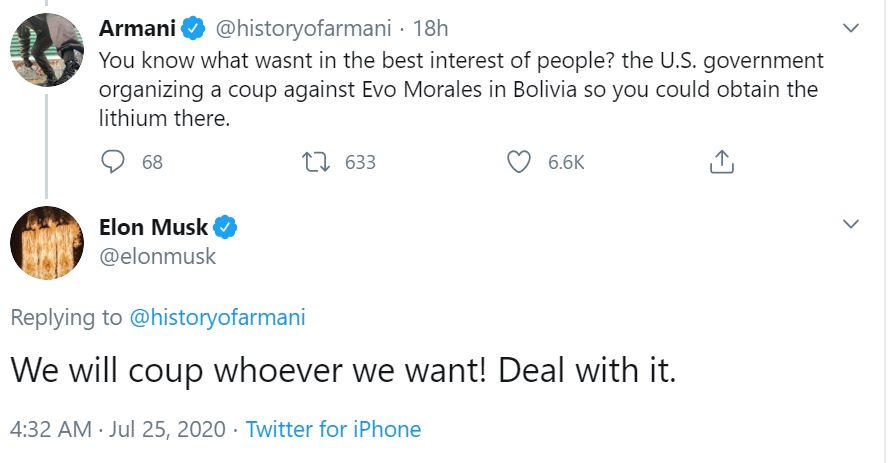 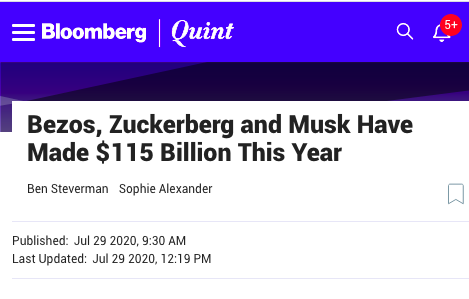 That 5th-richest-person @elonmusk claims to "favor" a UBI a system (that give people money "for free"), and a week later ignorantly meme-mock the underlying premise of Marx's Das Kapital is a stunning admission of how little history (and how much privilege) these men know.
/7 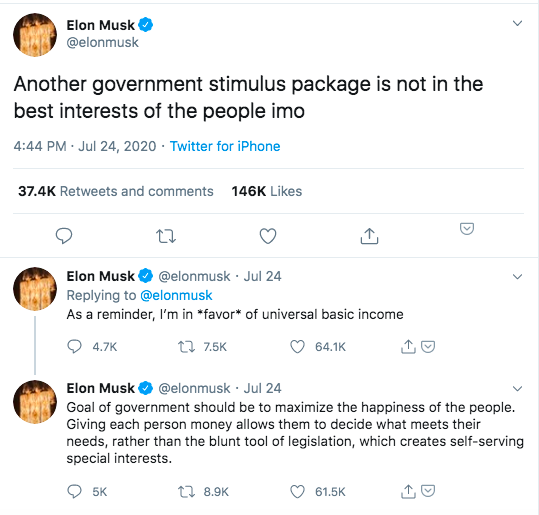 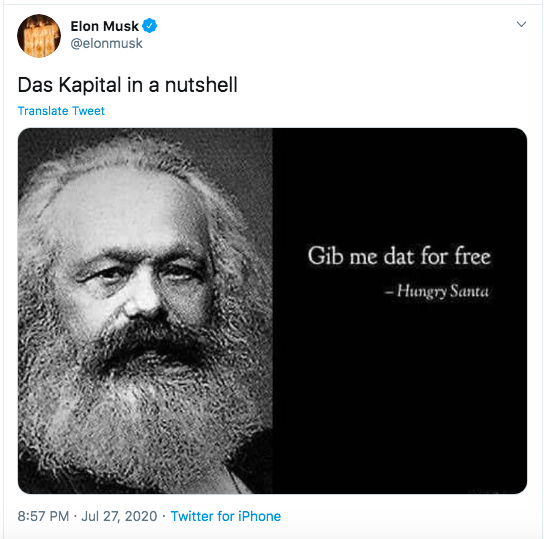 The billionaire rocket boys and social emperors hide their money in tax shelters, they starve the system. But we know that governments, if they are willing to invest for people, are able to absorb even large economic shocks (at least in the short term).
/6 https://www.propublica.org/article/how-germany-saved-its-workforce-from-unemployment-while-spending-less-per-person-than-the-u-s
How Germany Saved Its Workforce From Unemployment While Spending Less Per Person Than the U.S.

The pandemic has cost jobs around the world. Comparing people who lost the same position in the two countries reveals that the U.S. government is spending more on unemployment — but its citizens are…

https://www.propublica.org/article/how-germany-saved-its-workforce-from-unemployment-while-spending-less-per-person-than-the-u-s
So what does this all mean?
A quick transition from one economic system to the next is tremulous without careful planning. In fact, Marx and Engles had a whole concept about the "in between" phase between capitalism and communism.
/7
https://en.wikipedia.org/wiki/Dictatorship_of_the_proletariat
@automationomics is, at its core, about creating a new line of inquiry that seeks to map the transition (and intermediate steps) to a post-scarcity world that fundamentally centers individuals, while also accounting for intergenerational rights and historical marginalization.
/8 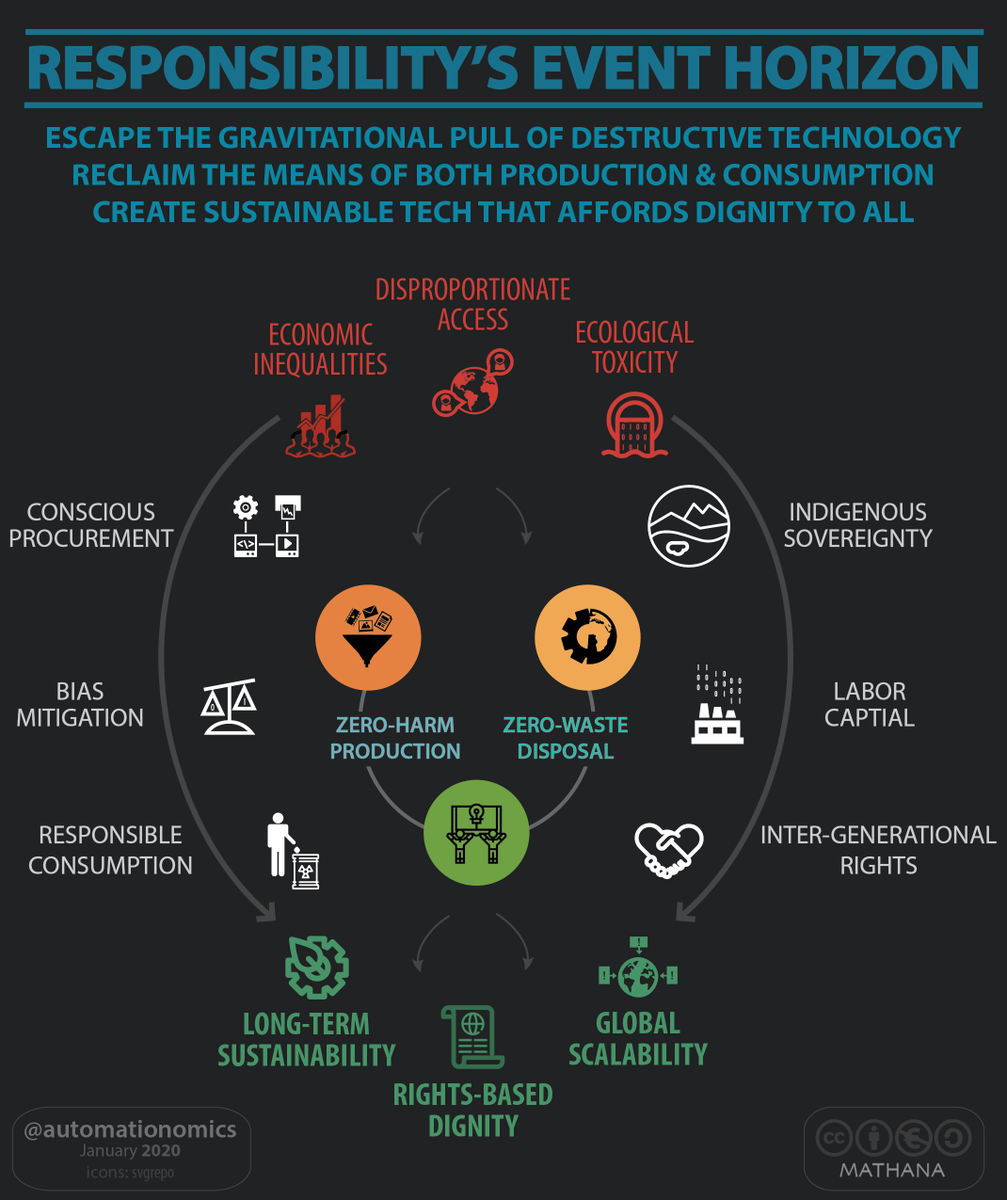 It won't be easy, and we may get things wrong, but if we are able to map out a desired end-state on Earth, I believe we can create a compelling shared vision with enough critical mass to make the journey to become a socio-technological civilization that leaves no one behind.
/9
You can follow @automationomics.
Tip: mention @twtextapp on a Twitter thread with the keyword “unroll” to get a link to it.