Read on Twitter
Ask yourself why none of those Lincoln players made any waves before their current project.

Ill tell you why:

Their works sucks but it is being paraded around as amazing by Dems/Major Media (same thing) because it is “Republicans” going after Trump (the person that fired you). https://twitter.com/PreetBharara/status/1277440493102813184

For example, the largest recipient of @ProjectLincoln funds this cycle has gotten $1.93 million as of the last filing. The only other federal campaign money given to them was $12,000 the last cycle. Second largest recipient ($413,313) also has $6,105 from the @cologop this cycle.
That firm, Tusk Digital which is owned by @RonSteslow the founder of @ProjectLincoln, got $74,937 last cycle from a Super PAC backing @CarlyFiorina and $2 million in the 2016 cycle.

Day ago, Fiorina announced she is supporting Biden. 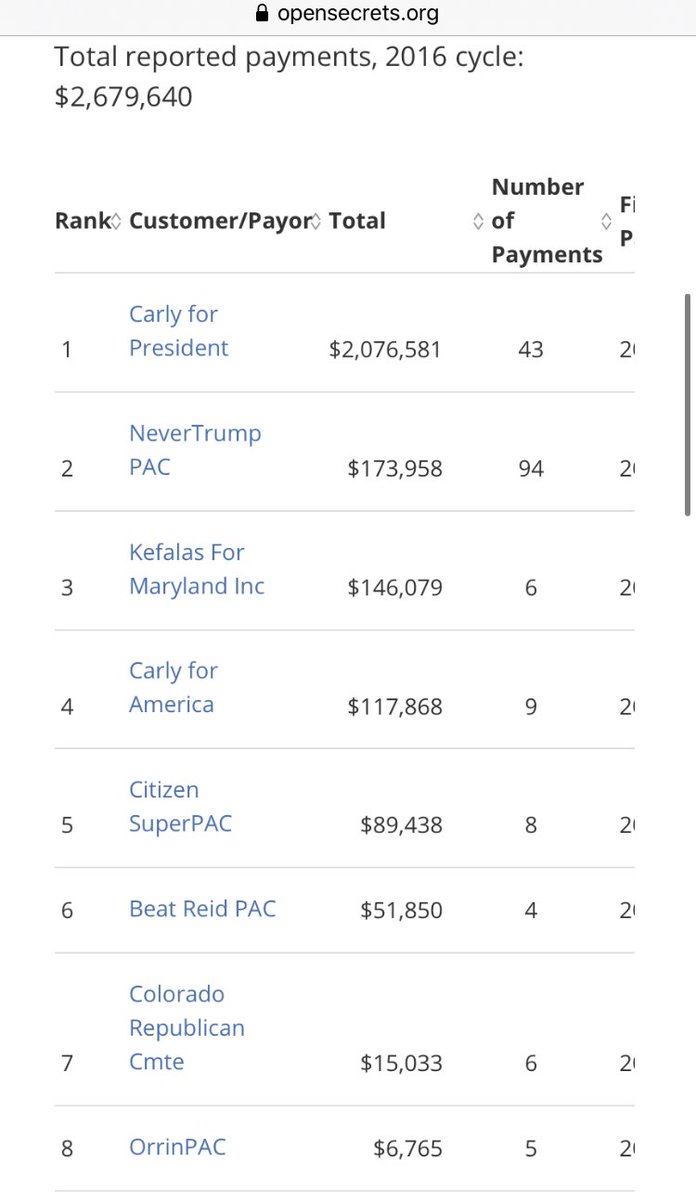 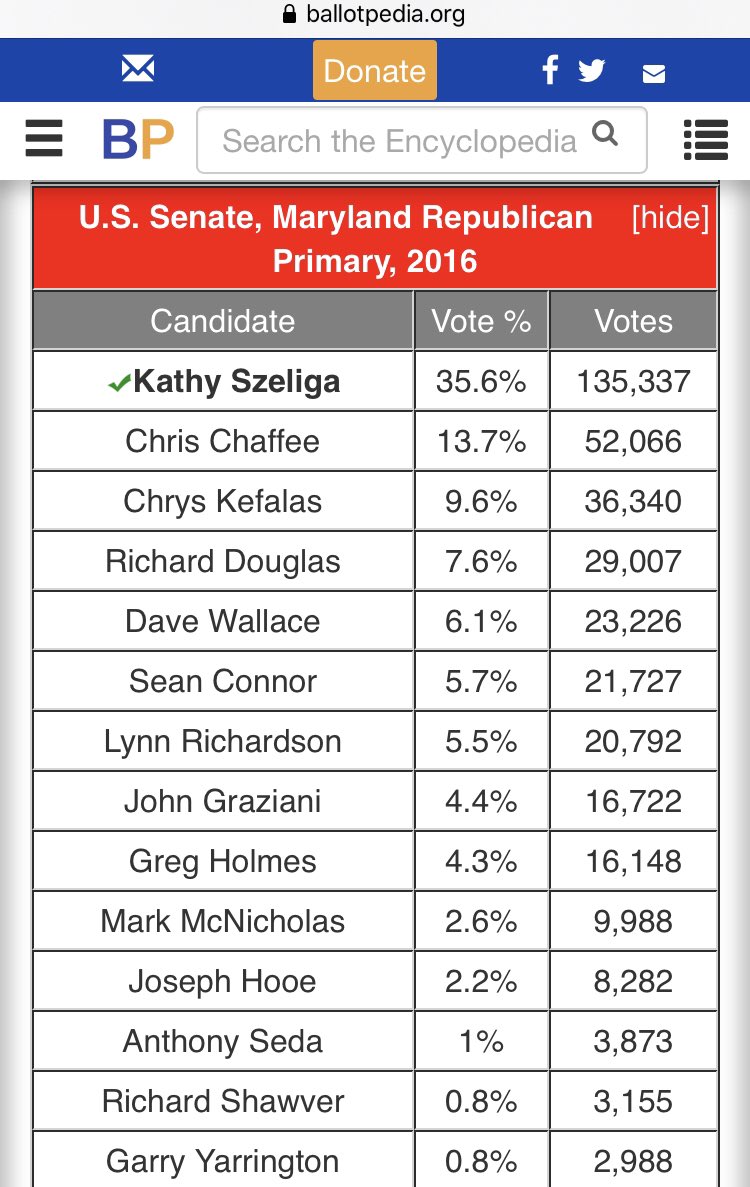 There is more: Beat Reid PAC raises and spend almsot $60,000 in the 2016 cycle. Tusk Digitial, the firm run by @ProjectLincoln Foudner @RonSteslow, received $51,850 of it. In the 2014 cycle, Tusk received only $14K from campigns and it’s their first year online. 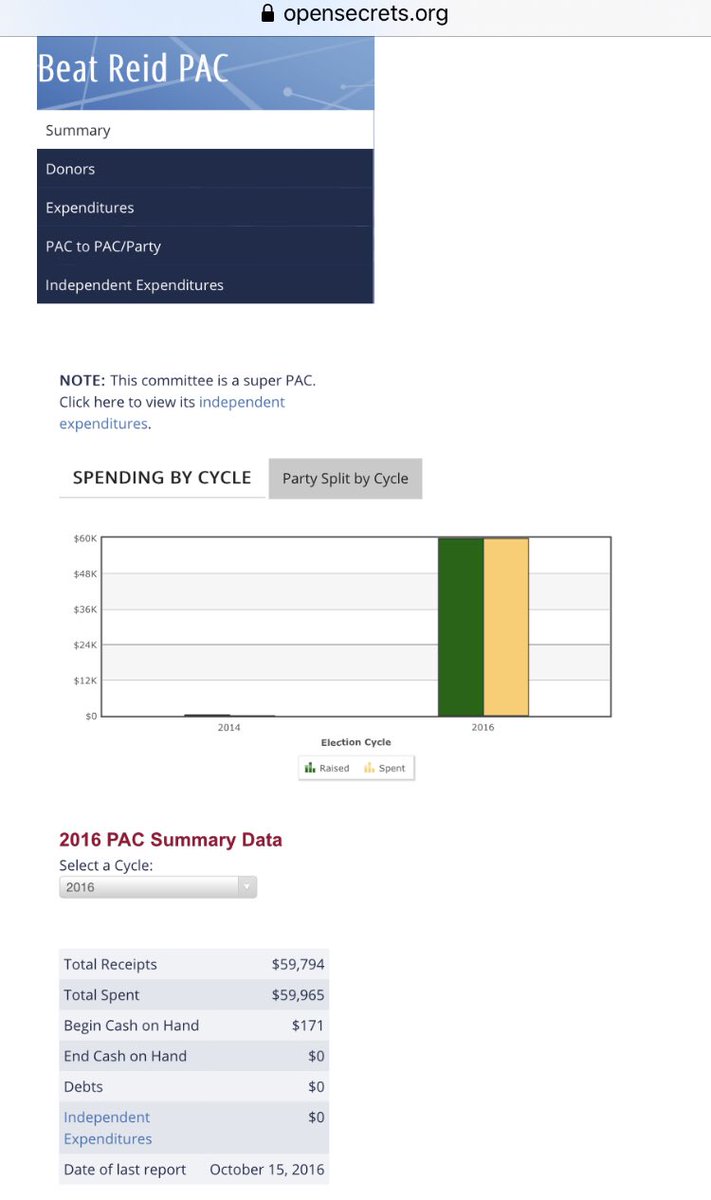 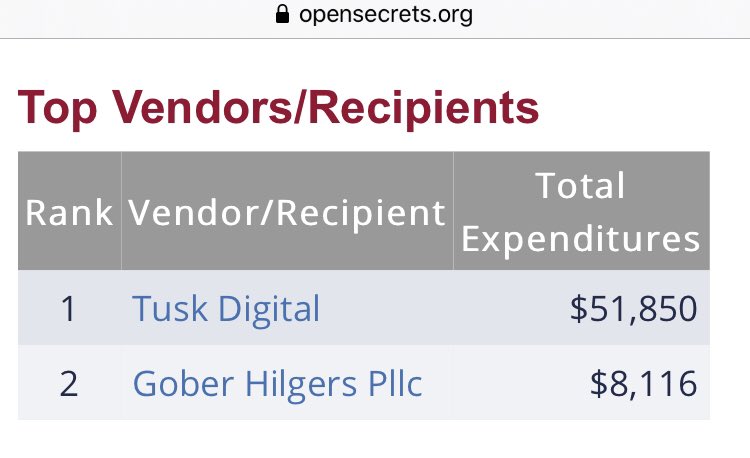 In summary, the company run by @ProjectLincoln founder has received most of its federal-level campaign money from the @CarlyFiorina Super PAC and his most-paid individual campaign pulled in only 9.6% in a GOP Senate Primary. Yet now he is suddenly a genius? No. Media Propaganda.
I don’t begrudge @ProjectLincoln foudner @RonSteslow raking in $$$ from Super PACs but

A) It’s not principles. It is his living or grift.

B) He has little client success to show from past efforts, so the Project’s current exposure is driven by bias; not merit of their work.
The Lincoln Project guys with a few million dollars are getting more media attention than those who run the hundreds millions for Biden/DNC, and the operatives behind it are getting more media attn than all of them combined got the last 20 years. They suddenly became pros? Please 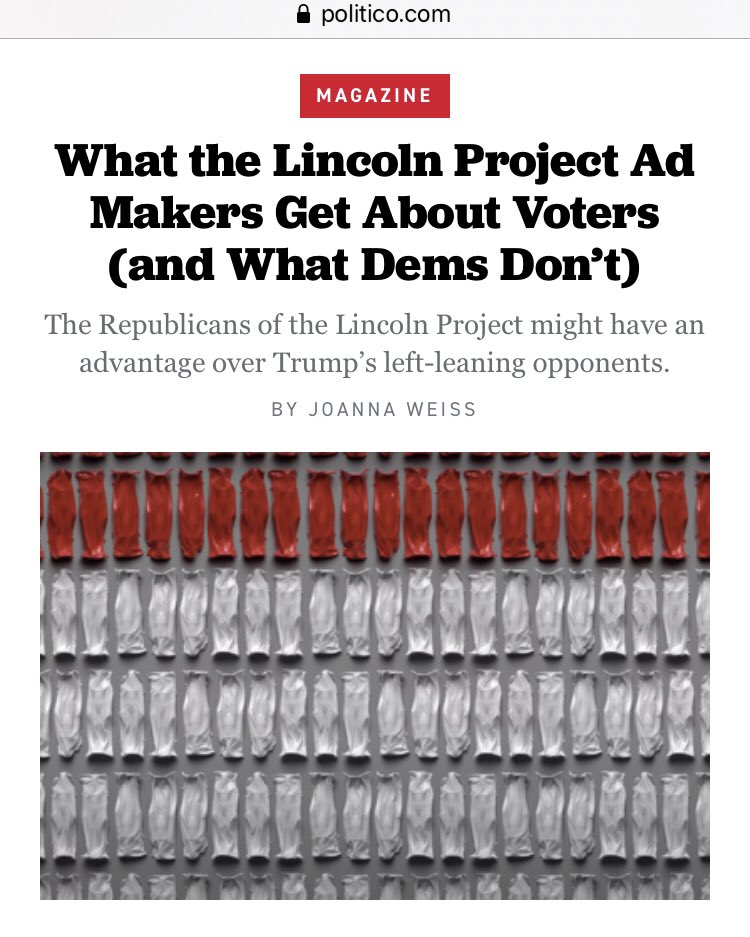 I forgot to note that the above item is now the LEAD at Politico!

Anyway, we have here a group of amateurs who produce third rate items as measured by the fact that their past projects got little organic play; little earned media and that their candidates lost big time. But
now that they are REPUBLICANS who work against a REPUBLICAN president, it gets media play despite being garbage. I really don’t get this genre of journalism of a “REPUBLICAN vs REPUBLCAN.” They are self-serving grifters still bitter that Trump won and their candidates lost.
So when you look at a clown ad it becomes WOW becasue self-serving grifters who milks some dumb millionaires are paid to make this garbage? I really don’t get this type of journalism. Oh. It’s not journalism. It’s political hackery by DNC operatives employed by national “media.”
One of the people active in the Lincoln Project is John Weaver ( @JWGOP).

He worked for McCain 2000, lost primary.

JW is a failed consultant who is suddenly brilliant? Media hype.
Jeniffer Horn is involved with The Lincoln Project. Credentials? Lost a house primary (2010) and a house election (2008). Ran/won for NHGOP Chair (a campaign which revealed a $93K IRS lien). The only FEC-level money she earned: Bill Weld $21,629 this cycle. Lincoln Project $20K
Reed Galen is the Treasurer of The Lincoln Project (TLP). As of the late March filing period, his firm - Summit Strategic Communications - was the largest recipient of TLP funds (millions). Only other federal-level campaign money his firm ever got was $12K from a PAC last cycle.
The $12K that Reed Galen’s firm received last election cycle (the only FEC-level funds his firm got before The Lincoln Project) was from the “New OC PAC” which was funded by supporters of a Republican who ended up coming in 4th in the CA48 house election. Now he is a genius?
There is MORE: @JWGOP signed a 6 month, $350 lobbying contract in May 2019 (that’s not long ago!) with a subsidiary of Russia’s gov-owned energy arm TO LOBBY AGAINST SANCTIONS!

Yet these clowns get promoted by Collusion Truthers on CNN/MSNBC? They grift everyone. Amazing! 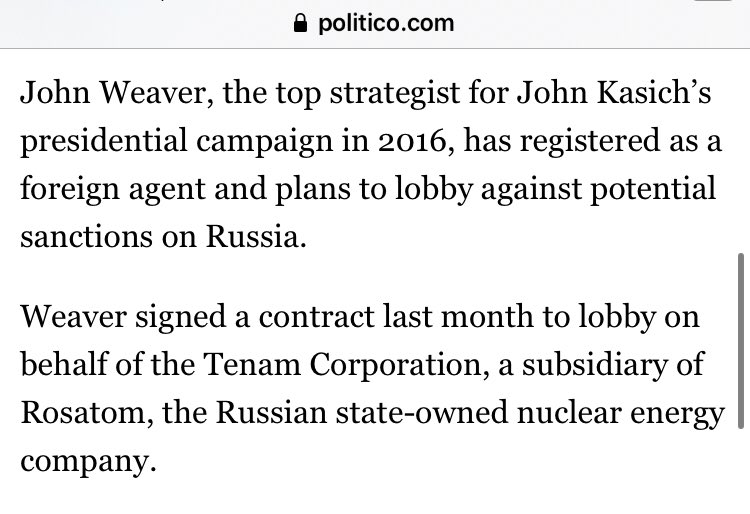 Ok. @FallonTonight sent out something last night; it has 1.1 mill views. Lincoln Project posted the same thing as theirs a few hours ago and it has way more views despite having a smaller Twitter account.

Oh, things against Trump become GREAT when it is from “Republicans.” 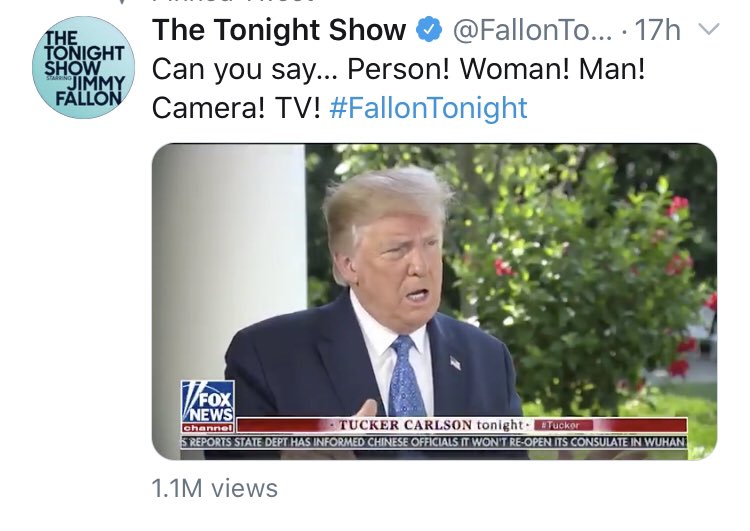 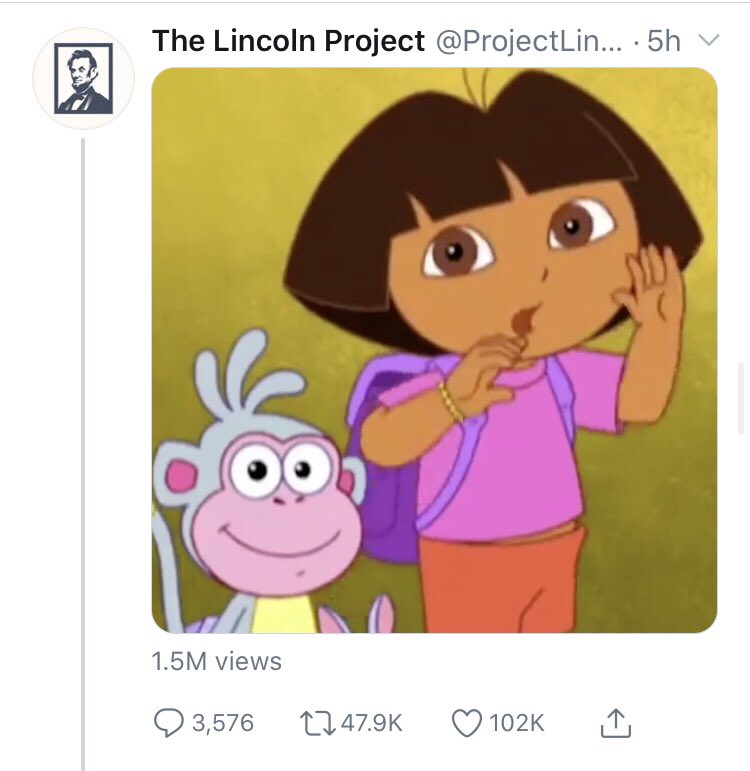 Romney Alumni for Biden is led by “ @micahspangler who served as a Florida field director for Romney’s unsuccessful bid for the presidency,” reports Politico. Obama won FL.

Another sore losing saboteur who if he knew how to win elections would do to the GOP what AOC does to Dems.
The string of election losses for The Lincoln Project continues: They invested heavily in defeating a few @SenateGOP yet those GOPs won.

Moreover, @davidsirota writes from a Focus Group that some of TLP ads may have pushed voters back to the GOP. https://www.dailyposter.com/p/the-real-story-about-never-trump
The Real Story About “Never Trump” Republicans

Data obtained by The Daily Poster show that Lincoln Project ads were often ineffective — and some may have even convinced some voters to support Trump.

https://www.dailyposter.com/p/the-real-story-about-never-trump
“Since its creation, the Lincoln Project has raised $90 million. But only about a third of the money, roughly $27 million, directly paid for ads that aired on broadcast and cable, or appeared online, during the 2020 campaign.” - AP 2/11/21 https://apnews.com/article/donald-trump-b14be5f06588b8f1d78125d4141394cb
How a leading anti-Trump group ignored a crisis in its ranks

https://apnews.com/article/donald-trump-b14be5f06588b8f1d78125d4141394cb
WHOA! Reed Galen is an owner of “Summit Strategic Communications” and the Treasurer of @ProjectLincoln.

Before 2020, his company was paid only $12K in Federal-level campaigns. 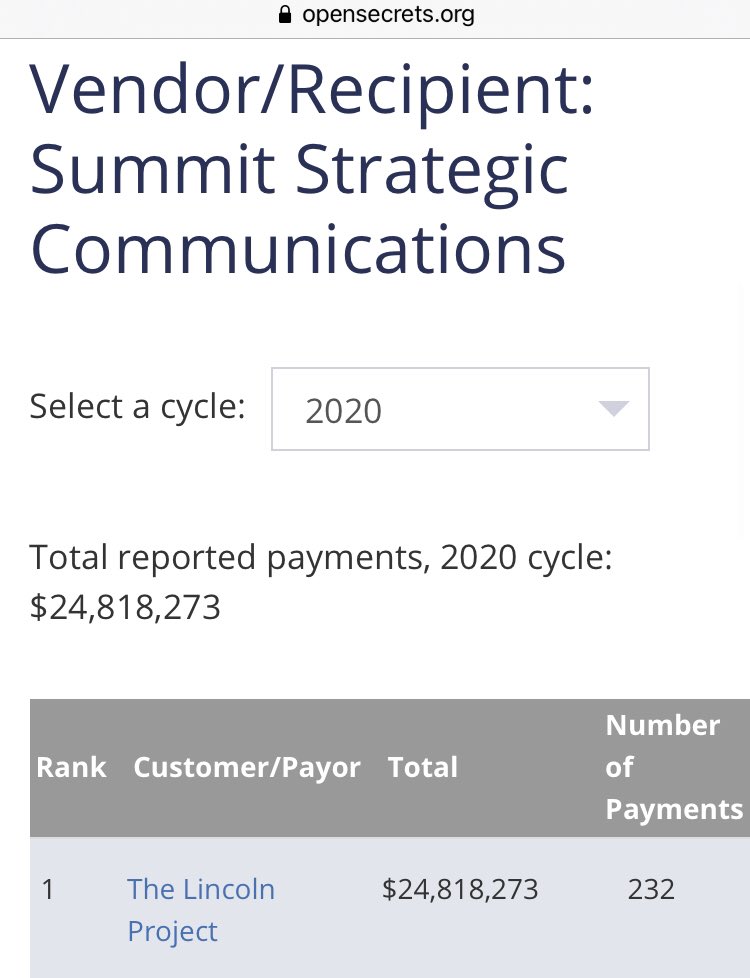 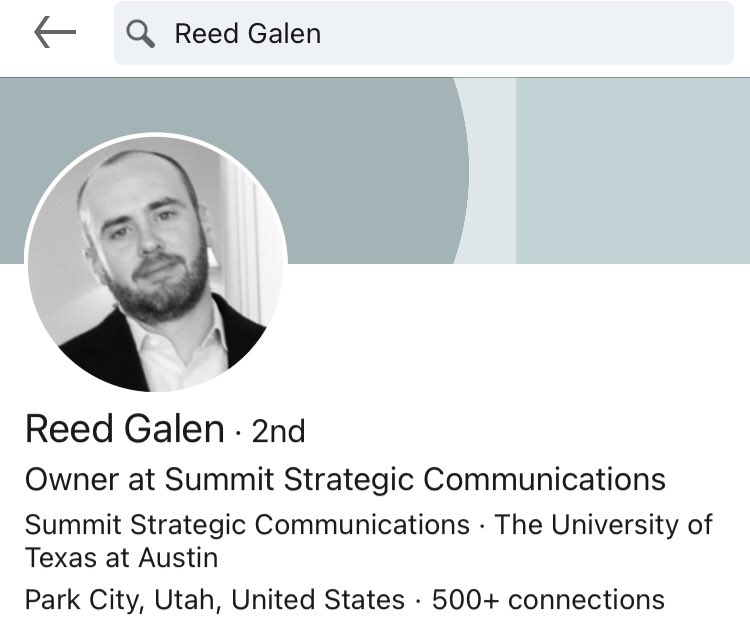