Read on Twitter
There has been a lot of discussion of the Swedish approach to coping with the #COVID19 pandemic, and of whether their strategy of more voluntary restrictions and a more rapid approach to reaching ‘herd immunity’ would work. Let’s talk about the results so far. 1/
It’s been known for some time that the COVID19 death rate in Sweden was 3-7 times that of its similar Nordic neighbors, even if Sweden was doing better than many other countries with more severe restrictions, like the USA. https://www.economist.com/europe/2020/05/16/is-swedens-approach-to-covid-19-wise-or-reckless via @TheEconomist 2/
Is Sweden’s approach to covid-19 wise or reckless?

Its avoidance of a hard lockdown is unusual, but Swedes think it is working

Fewer restrictions than other leading countries and schools remain open

https://www.ft.com/content/31de03b8-6dbc-11ea-89df-41bea055720b
Swedes themselves have *mostly* acted sensibly. Use of public transport has fallen significantly. A third of people say they avoid going to their workplace. Daily restaurant turnover fell by 70% in the month through April 22. But good behavior is hardly uniform. 4/ 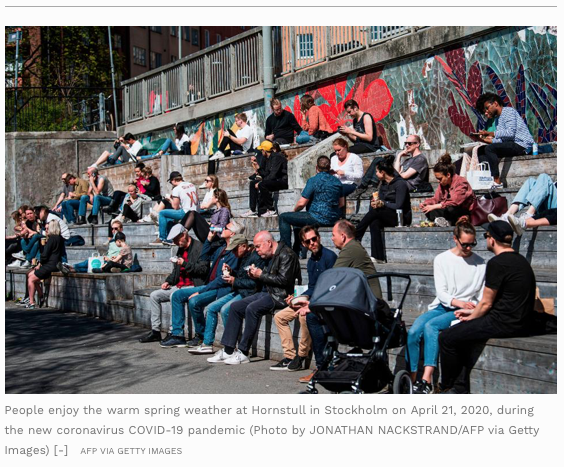 Sweden chose this path in some sense w reason, because absent a vaccine or total, hermetic isolation of a population, there's no way to avoid a plague like this. Plus, full lockdown is a stop-gap measure, to flatten the curve; some set of procedures must eventually replace it. 5/
But could the Swedes somehow miraculously thread the needle – and protect their vulnerable members while also allowing the pathogen to spread relatively unchecked in its population, building collective immunity without letting people die? (Figure from April 6.) 6/ 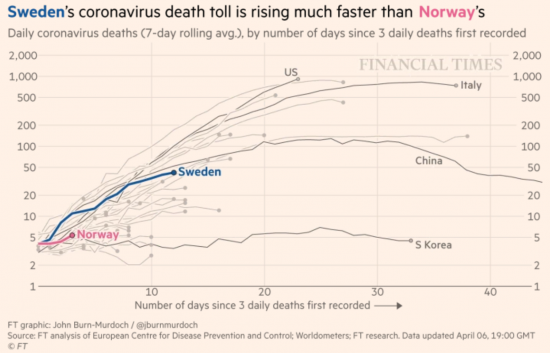 Well, in this detailed & terrific new preprint via @karin_modig & @MaEbeling, the results are in. As expected, the price of this #COVID19 strategy is death. This is a sad truth about what happens when there is a deadly germ like SARS-CoV-2 circulating. https://www.medrxiv.org/content/10.1101/2020.05.10.20096909v1 7/
EXCESS MORTALITY FROM COVID-19. WEEKLY EXCESS DEATH RATES BY AGE AND SEX FOR SWEDEN.

Excess deaths among all (adult) ages and both sexes increase as the pandemic progresses across time in 2020 in Sweden as the figure shows. Along with Italy, Spain, France, Belgium, and UK, Sweden has the highest rate of excess deaths in Europe at this time. 9/

The overall magnitude of the impact of the COVID-19 pandemic on human survival is mind-boggling. In rich, healthy, functional Sweden, it has already shaved 3 years of life expectancy for men and 2 years for women, this paper shows! https://www.medrxiv.org/content/10.1101/2020.05.10.20096909v1 10/
EXCESS MORTALITY FROM COVID-19. WEEKLY EXCESS DEATH RATES BY AGE AND SEX FOR SWEDEN.

With few restrictions and no tracing of the disease’s spread, the government is relying upon Swedish character and traditions to see it through the pandemic.

http://bostonreview.net/politics/adele-lebano-sweden%E2%80%99s-relaxed-approach-covid-19-isn%E2%80%99t-working#.XsFOzZzPG_s.twitter
Important COVID19 update today on Sweden, from official press conference: serology survey of ~1100 people from 9 regions during week 18, with sensitivity 98.3% & specificity 97.7% was completed. Age pattern is as expected but seroprevalence is low, alas. via @JacobGudiol 14/ 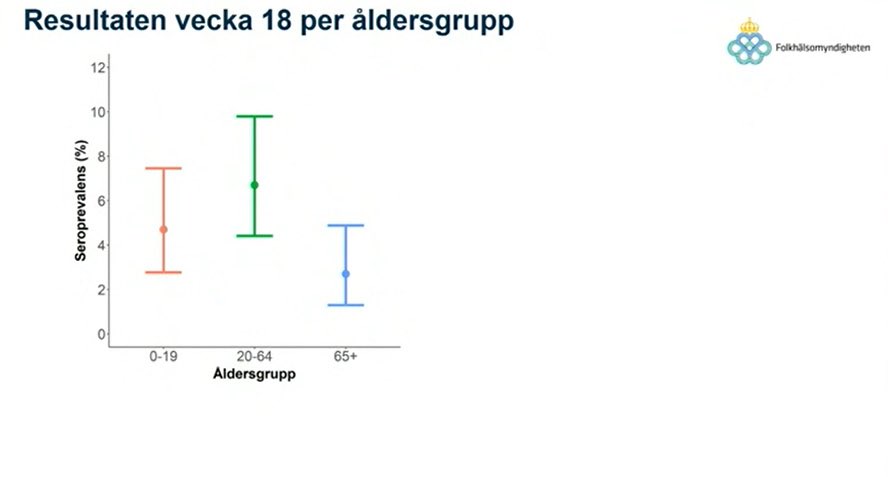 A further update comparing Sweden, so far, to its Nordic neighbors, as of May 24. /15 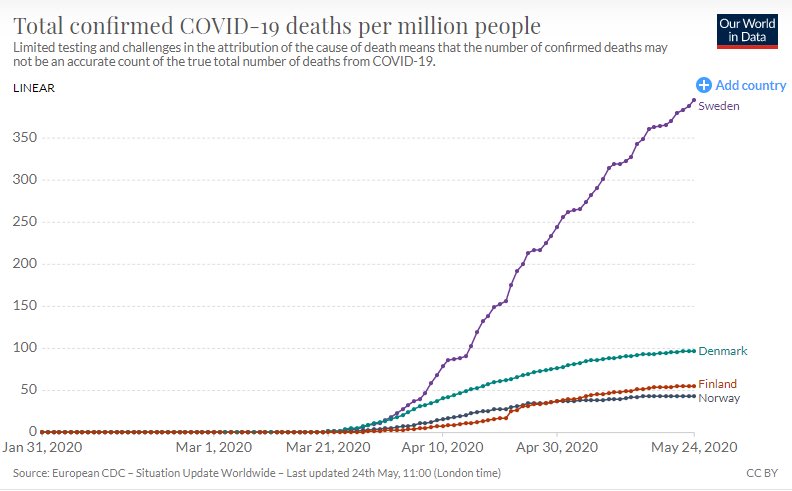 As of June 3, Sweden seems unhappy with its own approach, given how it has played out in terms of deaths and immunity acquired. https://www.bbc.com/news/world-europe-52903717 /16
Coronavirus: Sweden's Tegnell admits too many died

Anders Tegnell says more should have been done early on to stem coronavirus in Sweden.

Its decision to carry on in the face of the pandemic has yielded a surge of deaths without sparing its economy from damage — a red flag as the United States and Britain move to lift lockdowns.

“Sweden has recorded a much higher death-per-population rate than its neighbors. It recorded 5,918 deaths as of Sunday, compared to 278 in Norway and 346 in Finland.” 18/
Sweden is moving away from its no-lockdown strategy and preparing strict new rules amid rising...

Sweden is preparing to give local authorities the power to strongly recommend people against using public transport and visiting busy public places.

Sweden on Monday announced a ban on public events of more than eight people at a press conference where ministers urged the population to do the right thing.

You can follow @NAChristakis.
Tip: mention @twtextapp on a Twitter thread with the keyword “unroll” to get a link to it.