Read on Twitter
JUST RELEASED: An @IESResearch evaluation of a @usedgov experiment on providing Pell Grants to very-short-term programs. The headline: Sure, it increases enrollment in those programs, but impact on labor market outcomes was not detected. 1/ https://ies.ed.gov/ncee/pubs/2021001/pdf/2021001.pdf
The backstory: This experiment was launched in 2011 under the Experimental Sites Initiative, and ended in 2017. It's one of the only such experiments ever designed for rigorous evaluation -- an RCT. Eval results were due last year, but kept being delayed to fix coding issues. 2/ 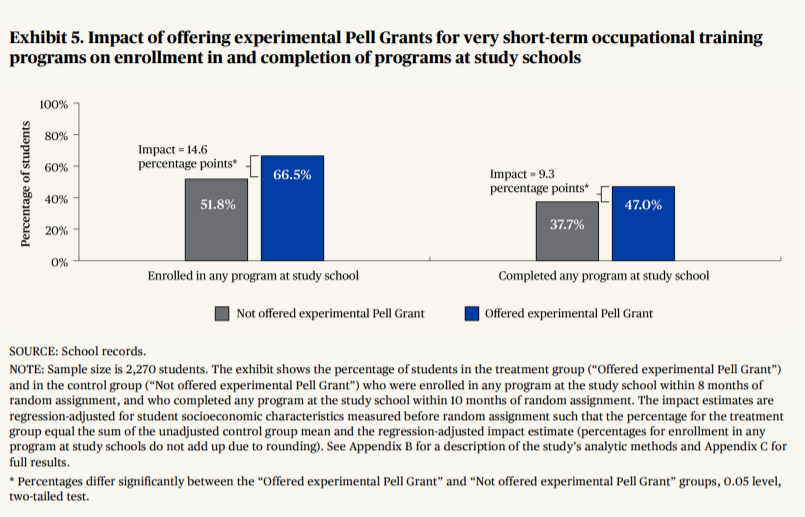 But increasing enrollment is not useful if it doesn't lead to good jobs. Many students did not complete programs related to high-demand occupations (59 percent, compared with 67% without the Pell $). And research shows labor market outcomes are VERY mixed, with small benefits. 4/
Almost two-thirds of those who completed high-demand programs were in truck-driving/transportation programs. The wages in those jobs aren't awful, but annual job turnover rates are more than NINETY PERCENT among long-haul truck drivers: https://www.trucking.org/news-insights/turnover-rate-large-truckload-carriers-rises-first-quarter. Not good jobs. 5/
Turnover Rate at Large Truckload Carriers Rises in First Quarter | American Trucking Associations

https://www.trucking.org/news-insights/turnover-rate-large-truckload-carriers-rises-first-quarter
We can't actually say whether these participants saw good or bad labor market outcomes -- because in the footnotes is this point, indicating that IES couldn't find evidence of any impact (among 2k+ participants). Elsewhere, IES says it didn't get the labor market data at all. 6/

Meanwhile, students were just as likely to take out federal student loans if they got Pell Grants to enroll as those who didn't. 7/
IES ballparked the for-credit cost at $500m/year -- a lot higher than the $1.2b-$1.8b CBO & OMB have guesstimated. https://www.newamerica.org/education-policy/reports/could-short-term-pell-lead-pell-shortfall/ Note: Only for-credit programs were able to participate in this exp. Proposed leg. would also allow Pell for *non-credit* programs. 8/
Could Short-Term Pell Lead to a Pell Shortfall?

https://www.newamerica.org/education-policy/reports/could-short-term-pell-lead-pell-shortfall/
Another note: ED also tested giving Pell to people with a bachelor's degree for short-term programs (also a proposed leg. change). No labor market outcomes there either, but yes, increased enrollment/completion, with even larger increase in use of student loans. Add $200m/yr. 9/
To sum up: Glad to see this report out in the world, but without strong evidence that very-very-short programs will lead to good labor market outcomes, lawmakers have no business drastically rewriting the mission of the Pell Grant program. END/
You can follow @claremccann.
Tip: mention @twtextapp on a Twitter thread with the keyword “unroll” to get a link to it.